The EUR/USD pair spent Thursday seesawing around the 1.1300 figure, unable to attract speculative interest. The post-FOMC Minutes dollar’s rally lost steam during the European session but recovered some ground with the US opening amid fresh highs in US government bond yields. Market participants consider the Federal Reserve is far more concerned about inflation than what it’s revealing. Yields soared, with that on the 10-year US Treasury note reaching 1.75%, keeping the greenback afloat. The US dollar has pulled back just a bit during the course of the trading session on Thursday to reach down towards the ¥115.75 level. At this point, there are plenty of buyers underneath, but that does not necessarily mean that we take off and go straight up in the air. There’s more support at the ¥115 level, which of course is a large, round, psychologically significant figure and was a major barrier previously.

The 50 day EMA is currently at the ¥114 level and rising. Market goes much higher, perhaps reaching towards the ¥117.50 level. The British pound has fallen a bit during the course of the trading session on Thursday, after forming a massive shooting star on Wednesday. At this point though, sign of bearish is still remain unknown.

To the downside, we have the 50 day EMA hanging about the 1.3433 level and turning higher, while the 200 day EMA is sitting just above the 1.3575 level and flattening out. If we can break above the 200 day EMA, then it is likely that the market will change its overall longer-term trend, rallying yet again to go much higher. On the other hand, if we break down below the 50 day EMA it is likely that we could go looking towards the 1.32 level again.

The AUD/USD pair remained under heavy selling pressure through the first half of the European session and slipped below mid-0.7100s, or over a two-week low in the last hour. The pair witnessed aggressive selling on Thursday and extended the previous day's turnaround from the vicinity of the 100-day SMA resistance, near the 0.7275-80 region. The US dollar continued drawing some support from surprisingly hawkish FOMC meeting minutes released on Wednesday. This, along with the cautious market mood drove flows way from the perceived riskier AUD.

The December 14-15 FOMC monetary policy meeting minutes indicated that the US central bank could hike interest rates earlier than anticipated previously to combat high inflation. The markets were quick to react and started pricing in the prospects for an eventual liftoff in March. This, in turn, continued pushing the US Treasury bond yields higher and underpinned the greenback. USD/CAD is currently trying to settle back below the support at 1.2730 while U.S. dollar is flat against a broad basket of currencies. The U.S. Dollar Index is located near the resistance level at 96.25. In case the U.S. Dollar Index manages to get back above this level, it will move towards the next resistance at 96.50 which will be bullish for USD/CAD.

Last Thursday, U.S. released Initial Jobless Claims report which indicated that 207,000 Americans filed for unemployment benefits in a week compared to analyst consensus of 197,000. Continuing Jobless Claims increased from 1.72 million to 1.75 million. Factory Orders grew by 1.6% month-over-month in November compared to analyst consensus which called for growth of 1.5%. 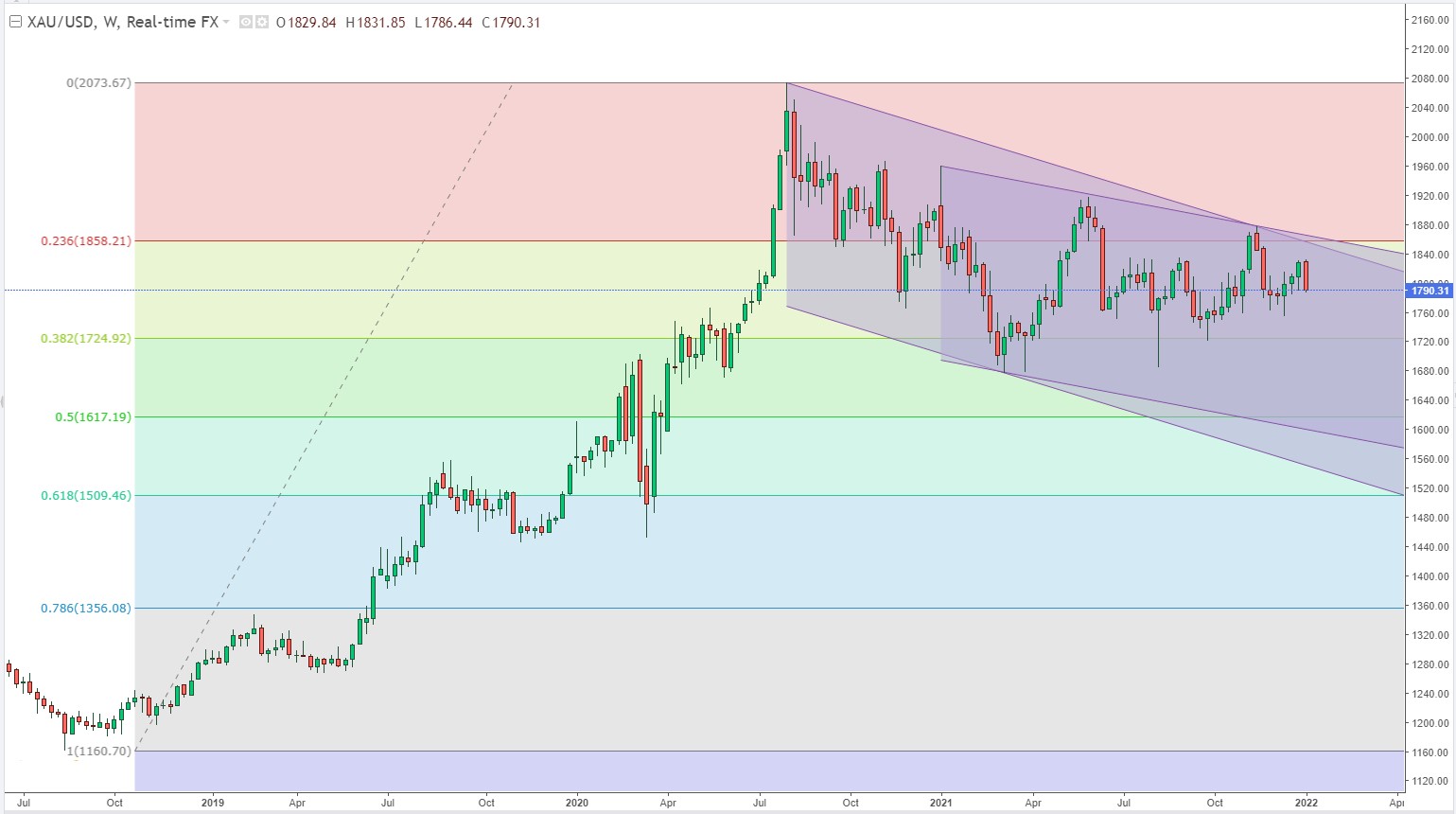 Gold, XAU/USD is headed towards the end of the North American session lower by some 1.15%. It's been a poor week for gold price so far and they are n the verge of a bearish close for the start of January. A break of $1,780 opens the risk to the $1,750s for the forthcoming weeks. Fundamentally, Gold is tumbling as markets attempt to squeeze in a fourth hike for 2022 in response to yesterday's Federal Open Market Committee minutes.

Selling pressure in gold markets has not come as a surprise to many analysts who observed US real yields, with which gold typically has a tight negative correlation, surging in wake of Wednesday’s Fed minutes. Short-Term Interest Rate markets have busily been bringing forward bets as to when the Fed’s rate-hiking cycle will get underway and how high the bank will ultimately take rates. But with markets also increasingly buying into the Fed’s bullish economic outlook, this added dose of Fed hawkishness has not been depressing long-term growth and inflation expectations. Oil climbed to a seven-week high as supply constraints from OPEC+ to North America offset concerns about the impact of a Covid-19 outbreak in China. Futures in New York rose 2.1% to the highest closing price since Nov. 16, and traded above $80 a barrel earlier in the session. A deep freeze in Canada and the northern U.S. is disrupting oil flows, boosting prices just as American stockpiles decline. Output from OPEC+ member Kazakhstan’s giant Tengiz oil field has been temporarily adjusted amid unrest in the Central Asian country Shares in Asia-Pacific were mixed in Friday trade following heavy losses for some regional markets in the previous trading day, as investors continue to assess the impact of a potentially faster-than-expected policy tightening by the U.S. Federal Reserve. The Nikkei 225 in Japan shed earlier gains and declined 0.13%, adding to losses after a nearly 3% drop on Thursday.

Intel stock (ticker: INTC) rose 1.4% to $53.87, even after the Fed minutes sent other stocks lower. Northland Capital Markets analyst Gus Richard upgraded Intel stock to Outperform from Market Perform in a recent note, helping the shares buck Wednesday’s broader market slump. “For the first time in many years, we think Intel is starting to execute,” Richard said, according to MarketWatch.

JPMorgan Chase & Co. will be looking to display strength as it nears its next earnings release, which is expected to be January 14, 2022. In that report, analysts expect JPMorgan Chase & Co. to post earnings of $2.98 per share. This would mark a year-over-year decline of 21.37%. Zacks Equity Research most recent consensus estimate is calling for quarterly revenue of $29.89 billion, up 2.29% from the year-ago period. MasterCard (MA) closed the most recent trading day at $373.90, moving -0.4% from the previous trading session. Heading into today, shares of the processor of debit and credit card payments had gained 10.57% over the past month, outpacing the Business Services sector's loss of 8.97% and the S&P 500's gain of 5.72% in that time.

The European Union's Nov Unemployment Rate data is estimated at 7.3%, still the same as the previous month.

Australia Nov Balance of Trade data, consensus A$10.6 billion versus A$11.22 billion.

Federal Reserve Chairman Jerome Powell will testify on his re-nomination as chairman of the US central bank before the Senate Banking Committee.

China's Dec Inflation Rate data is predicted to increase to 2.4% from 2.3% previously.

US Dec Inflation Rate data is expected to increase to 7.1% YoY compared to 6.8% previously.

US Core Inflation Rate data is expected to increase to 5.4% YoY compared to 4.9% previously.

US data to be served include:

US Dec Retail Sales data is forecast at 0.3% the same as before

US Jan Michigan Sentiment data is forecast to record 70.4 versus 70.6 previously