The shared currency retraces from daily highs around 1.1070, reflecting the risk-aversion of market players, as peace talks between Russia-Ukraine languish, as Fed and ECB speakers crossed the wires amid an absent economic docket. At 1.1017, the EUR/USD portrays the US dollar strength. At the same time, the US Dollar Index, a gauge of the greenback’s value vs. a basket of six majors, advances 0.27%, sitting at 98.502, while US Treasury yields rise sharply, with the 5-year sitting at 2.336%, higher than the 10-year T-note yield at 2.319%.

Late in the New York session, the EUR/USD dropped as Federal Reserve Chief Jerome Powell spoke at NABE annual conference. Jerome Powell said that the Fed would take the “necessary steps” to tame inflation towards the bank’s target of 2%, even if it needs to hike rates more than 25 basis points at a meeting or meeting. 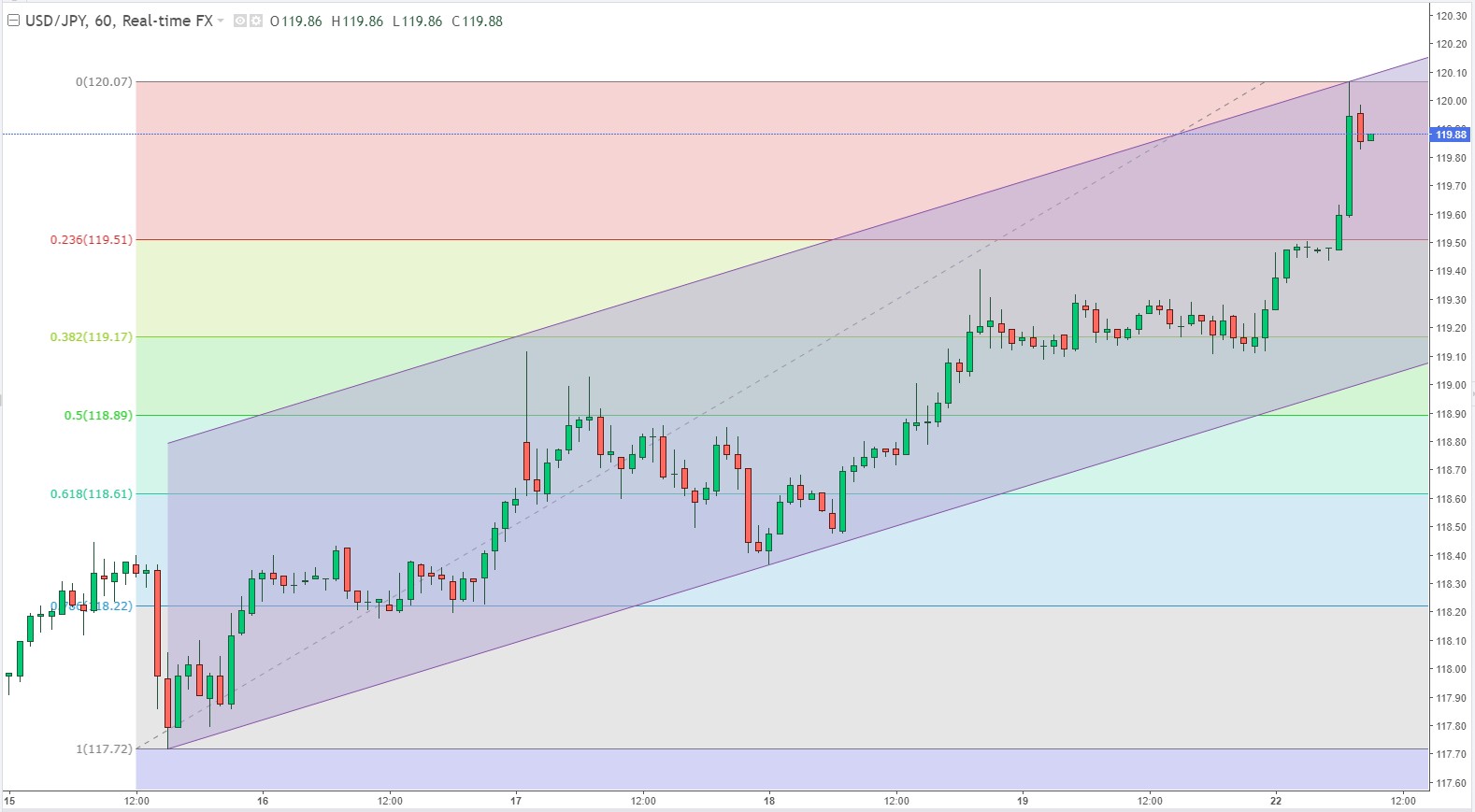 USD/JPY was seen consolidating its recent strong gains to the highest level since February 2016. Elevated US bond yields, the Fed’s hawkish outlook underpinned the USD and acted as a tailwind. The divergent Fed-BoJ monetary policy outlook supports prospects for further near-term gains. The USD/JPY pair extended its sideways/consolidative price moves through the mid-European session and remained confined in a range just a few pips below the multi-year peak set on Friday. The pair was last seen trading around the 119.20-119.25 region, nearly unchanged for the day.

Following the recent strong run-up of over 450 pips from the monthly low, around the 114.65 region, a softer risk tone drove some haven flows towards the Japanese yen and capped the USD/JPY pair. 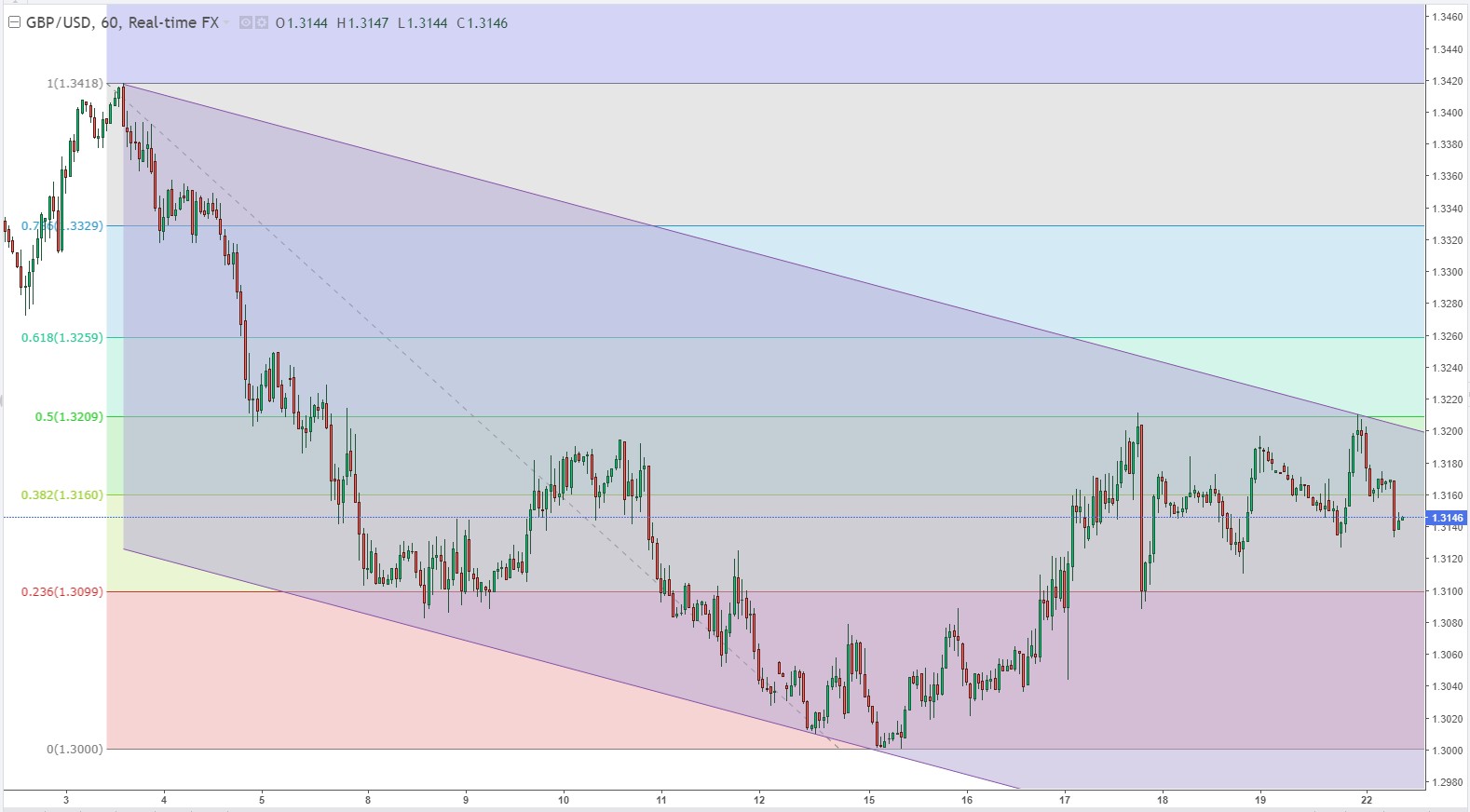 The GBP/USD pair is juggling in a narrow range of 1.3156-1.3170 as the market participants are waiting for the unfolding of the UK’s Consumer Price Index (CPI) numbers, which are due on Wednesday. A preliminary estimate for the UK’s CPI is 5.9%, much higher than the previous print of 5.5%. From a technical perspective, the pair, so far, has been oscillating well within the post-BoE trading range between the 1.3100 mark and the 1.3200 round figure. This, in turn, warrants some caution for aggressive traders and makes it prudent to wait for a convincing break through the mentioned band before positioning for a firm near-term direction.

The GBP/USD pair struggled to capitalize on Friday's goodish rebound from the vicinity of the 1.3100 mark and kicked off the new week on a softer note. A combination of supporting factors acted as a tailwind for the US dollar, which, in turn, exerted some downward pressure on the pair through the early European session. The AUD/USD begins the week on the wrong foot as it falls in the North American session amid a risk-off market mood, due to the extension of Russia’s invasion of Ukraine, as peace talks stall. At the time of writing, the AUD/USD is trading at 0.7409.

The AUD/USD bias is upwards, after breaking a falling-wedge on March 17, but it faces solid resistance at 0.7441 on March 7 daily high. Furthermore, the same day, the AUD/USD left the 200-day moving average (DMA) below the spot price, two bullish signals on the AUD, alongside some procyclical currencies bid, with commodity-linked peers soaring due to higher commodity prices. The AUD/USD first resistance would be 0.7441. Breach of the latter would expose September 3 daily high at 0.7478, followed by October 28, 2021, daily high at 0.7555. Spot gold (XAU/USD) has mostly been trading on the front-foot during US trading hours, despite the latest remarks from Fed Chair Jerome Powell, which struck market participants as far more hawkish than expected and boosted the US dollar/yields. Gold has rallied from early session sub-$1920 per troy ounce lows to current levels in the $1940 region, where it trades about 1.0% higher on the day. Last Thursday and Friday’s higher in the $1950 area are for now capping the price action.

Some analysts said his remarks were nothing more than a reiteration of his post-Fed policy announcement remarks from last week, but markets responded by further upping the implied probability of a 50bps move in May to above 60% (from around 50% prior to his commentary). The bulls are firmly back in control of global oil markets following a series of bullish catalysts over the weekend which have sent the front-month WTI future nearly $5.0 higher on the session to test the $110 per barrel area. As the Russian invasion of Ukraine rumbles on and Ukrainian officials defiantly reject Russian demands for its forces in the besieged city of Mariupol to surrender, EU governments are mulling whether to impose a blanket ban on Russian oil imports. 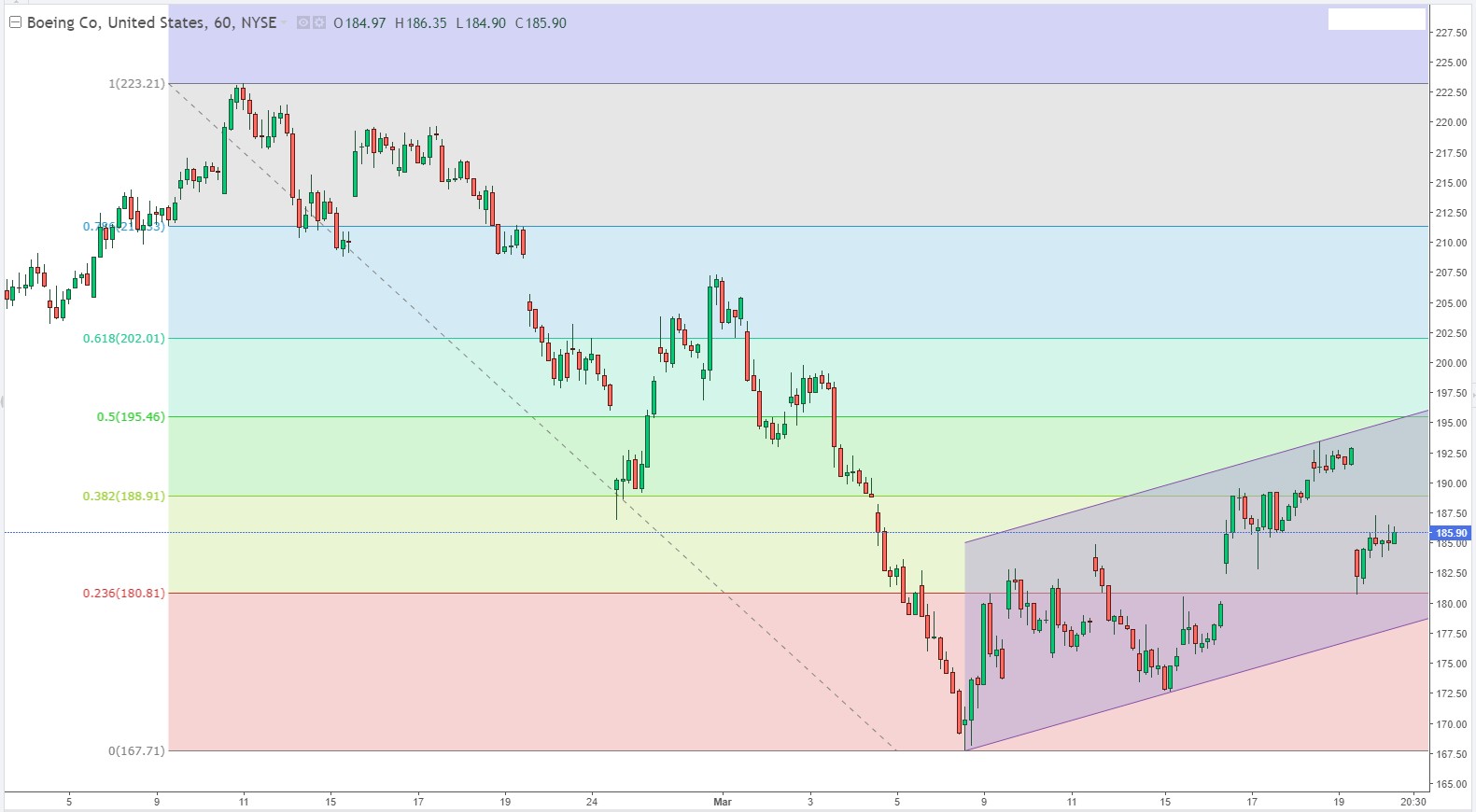 China Eastern Airlines has grounded all of its Boeing 737-800 planes after a flight carrying 132 people crashed in the city of Wuzhou en route from Kunming to Guangzhou today (March 21). Boeing’s stock dropped by more than 4% on the news. Today’s crash comes three years after another Boeing model, the 737 Max, was grounded worldwide following two fatal crashes within five months of each other.

China was the first country to ground the Boeing 737 Max in 2019 following crashes in Indonesia and Ethiopia, and while the country’s air regulators issued a safety approval in December for the plane to resume operations the government still hasn’t given a final sign-off for Chinese airlines to start flying the model again. BA stock drop 6.93 (-3.59%) closed at 185.90 on Monday. 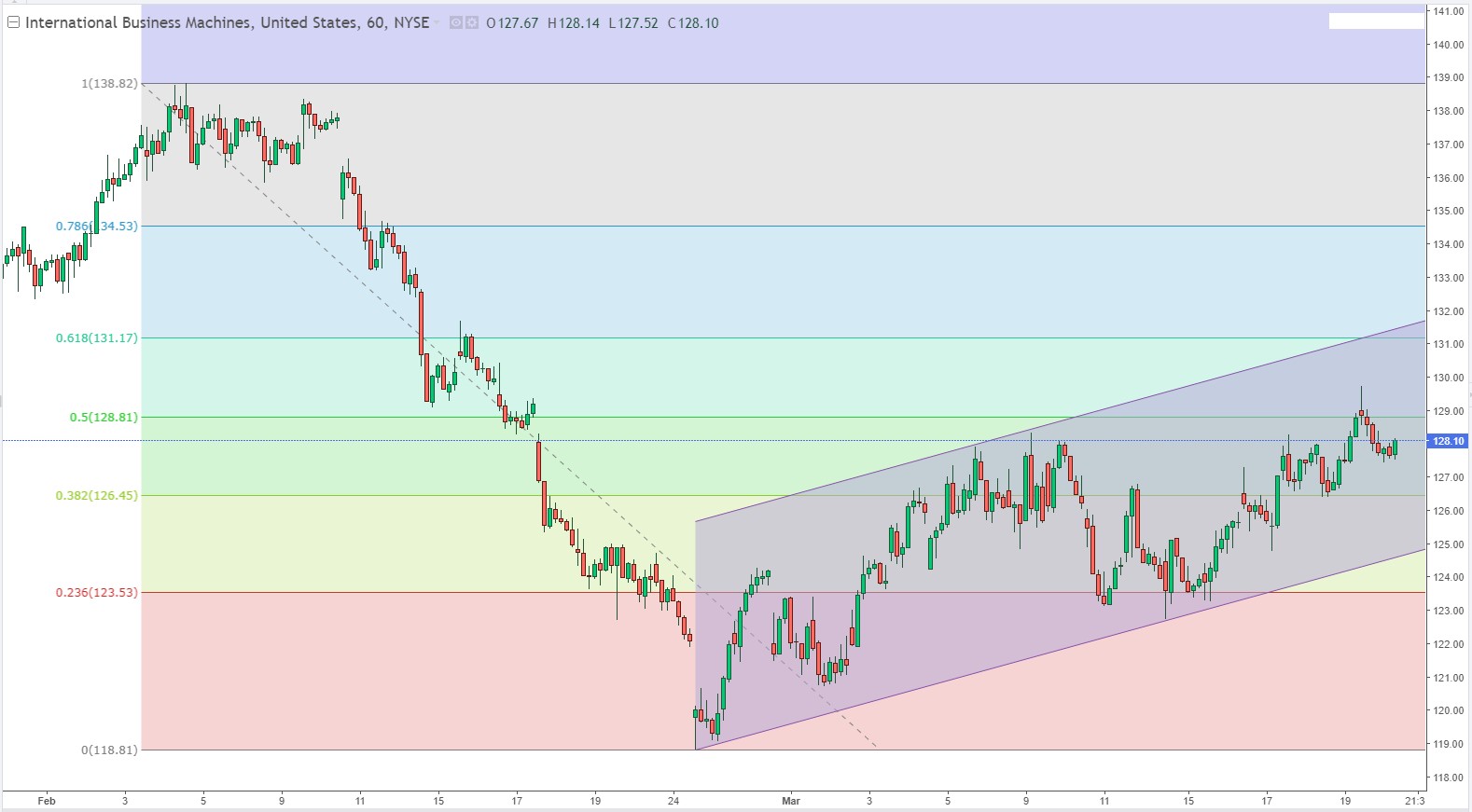 Legacy technology giant International Business Machines (NYSE:IBM), better known as IBM, has come through the tech wreck of the past few months relatively unscathed. IBM stock has proven to be more resilient than many analysts and investors previously thought. Year-to-date (YTD), IBM stock is down 5% to $127. That’s much better than the 15% YTD decline in the benchmark Nasdaq index and a stronger showing than other technology giants. Household names such as Apple (NASDAQ:AAPL) and Microsoft (NASDAQ:MSFT) are both down 12% YTD, and Oracle (NYSE:ORCL) is down 10% so far in 2022.