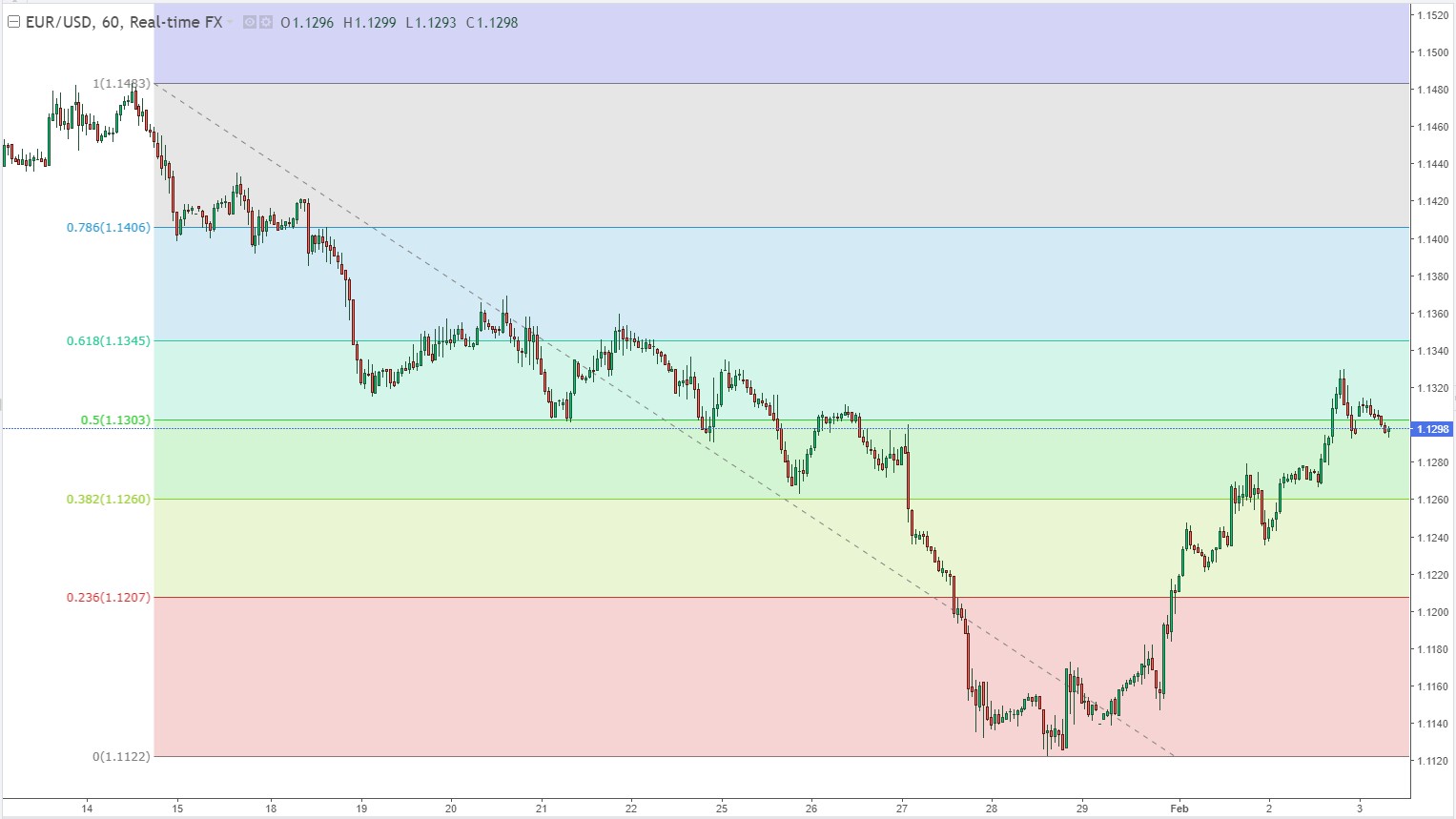 The EUR/USD pair found new strength and extended its rally above the 1.1300 figure on Wednesday to trade as high as 1.1329. The pair got a boost from EU inflation figures, as the annual Consumer Price Index jumped to 5.1% in January, largely surpassing the 4.4% expected and above the 5% previous. The reading came one day ahead of the European Central Bank monetary policy announcement, putting pressure on the central bank to respond with a tighter monetary policy. Across the pond, the US released MBA Mortgage applications for the week ended January 28, which rose 12%, and the January ADP Survey on private job creation, unexpectedly showing the loss of 301K positions in the month and sending the greenback further lower across the FX board. Market participants still waiting the release of Non-Farm Payroll data on Friday with expectation will add jobs 145K. USD/JPY appears to have reversed course ahead of the January high (116.32) as it gives back the advance following the Federal Reserve interest rate decision, and the exchange rate may face a larger pullback ahead of the US Non-Farm Payrolls (NFP) report as it snaps the series of higher highs and lows from the monthly low (113.47). USD/JPY extends the decline from last week’s high (115.69) despite a near-term recovery in global equity prices.It remains to be seen if the recent weakness in USD/JPY will turn out to be a correction in the broader trend as the Federal Open Market Committee (FOMC) lays out a more detailed exit strategy, and a further improvement in the labor market may encourage the central bank to winddown its balance sheet sooner rather than later as the NFP report is anticipated to show the US economy adding 153K jobs in January. At 1.3570, GBP/USD is around 0.40% higher on the day as it tracks down the start of the New York sessions highs of 1.3587 again during midday trade. Sterling is climbing on Wednesday for the fourth session in a row, reaching a 1-1/2-week high against the dollar. Trader's expectations that the Bank of England will raise interest rates on Thursday, a disappointment in US jobs data, a softer US dollar and rebounding US stocks, is supporting cable higher. The US dollar depreciated to a low of 95.806 at the start of the day as measured by the DXY index as what might be regarded as a prelude to Friday's January Nonfarm Payrolls employment report disappointed.  ADP private payrolls, which showed a 301.000 drop, was missing an estimate of 207k. The Australian dollar extends its rally to two straight days during the week, so far up 2.15% vs. the greenback. At press time is trading at 0.7129 during the Asian session.
Wall Street finished Tuesday’s session in the green, while Asian equity futures are set to open in the green. Meanwhile, the greenback keeps dropping, with the US Dollar Index down 0.28%, sitting around 96.26, a tailwind for the AUD/USD as the buck is down 1.09% in the week.On Tuesday, the AUD shrugged off the initial sell-off, post-Reserve Bank of Australia (RBA) monetary policy decision. Worth noting that the RBA ended the Quantitative Easing (QE) but failed short of hawkish expectations, as market participants waited for hints of a possible rate hike shortly. Gold (XAU/USD) climbs in the North American session as US T-bond yields led by the 10-year benchmark note fall three basis points, undermining the greenback. At the time of writing, XAU/USD is trading at $1808, up 0.44%. The market sentiment is mixed, as European bourses remain in the green, while US equity indices fluctuate between gains/losses. Meanwhile, the US Dollar Index extends its losses throughout the week to three straight days, down 0.20%, sitting at 96.07.

The ADP Chief Economist said that “The labor market recovery took a step back at the start of 2022 due to the effect of the Omicron variant and its significant, though likely temporary, impact on job growth.” Nevertheless, officials in the White House and Fed members warned that the January employment report would be disappointing, subject to the impact of the Omicron variant. 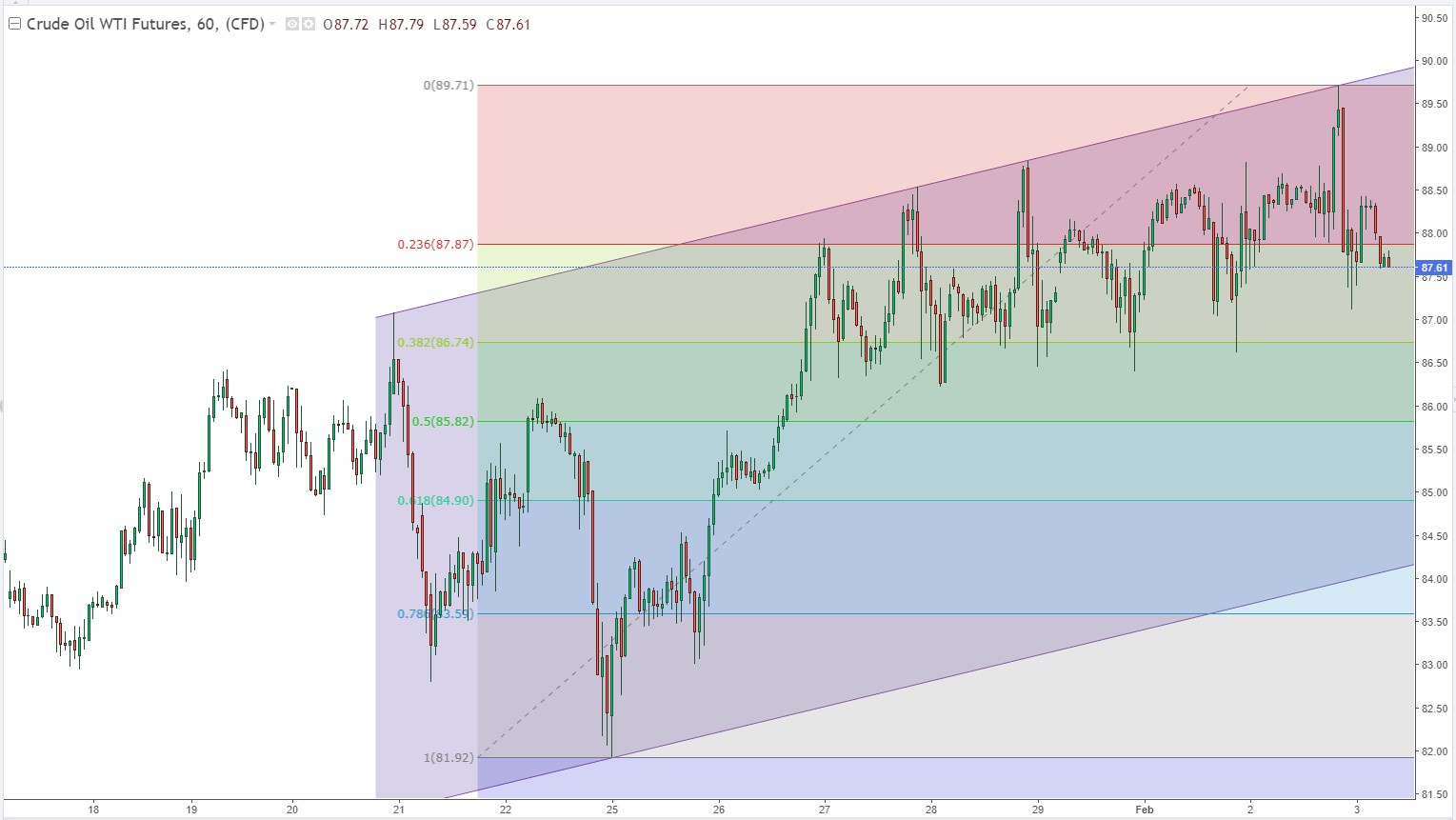 Oil prices popped higher in recent trade, with front-month WTI futures surpassing the $89.00 level to hit fresh seven-year highs as OPEC+’s Joint Ministerial Monitoring Committee (JMMC) recommended a 400K barrel per day (BPD) output hike in March. WTI even managed to briefly advance above the $89.50 level and eye a test of the $90 per barrel mark for the first time since October 2014, though has since dropped back a little.

The positive market reaction likely reflects a pricing out of bets that the group would agree to lift output by more than 400K BPD due to higher prices and strong demand. A principal concern that has helped to lift oil prices in recent weeks, noted analysts at UniCredit, “is that many (OPEC+) members are unable to deliver on their quotas due to a lack of spare capacity as a result of years of underinvestment”. Alphabet (GOOGL) is the IBD Stock of the Day as the Google parent posted a fourth-quarter earnings beat and announced a 20-for-1 stock split. Alphabet reported fourth-quarter earnings after the market close on Tuesday. Google stock is now in the black in 2022 after pulling back in early January amid volatility in the Nasdaq. Its relative strength line is at a new high.

Google stock gapped up 10% on Wednesday — reaching 3.030.93 at one point — before retreating to 2.960 at the close for a gain of 7.5%. Heading into the earnings report, Google stock had an entry point of 3.019.43. Google earnings under generally accepted accounting principles, also known as GAAP, jumped 38% to $30.69 per share, including a $2.84 per-share gain in equity investments. Amazon’s AMZN fourth-quarter 2021 results, which are scheduled to be released on Feb 3, are expected to reflect the impacts of its strengthening cloud service offerings. The company’s cloud computing arm, Amazon Web Services (AWS), holds the leading position in the cloud market, courtesy of its solid customer momentum on the back of its portfolio strength. This is likely to get reflected in the fourth-quarter results. AWS has become an integral division of the company as it generates significantly high margins.

In the last reported quarter, AWS revenues were $16.1 billion, accounting for 15% of net sales. The figure also rose 39% year over year. AWS’s operating income improved 38% from the year-ago quarter to $4.9 billion. The Zacks Consensus Estimate for fourth-quarter AWS net sales is pegged at $17.3 billion, indicating an improvement of 73.9% from the year-ago reported figure. AMZN stock lower 11.62 (-0.38%) closed at 3.012.25 on Wednesday.