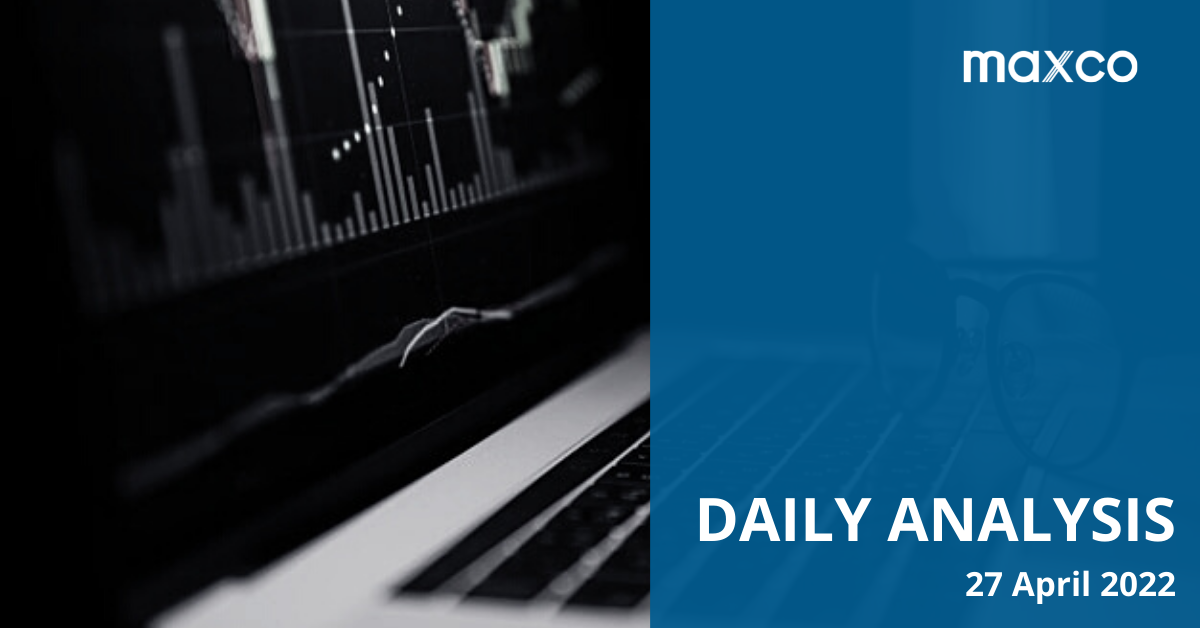 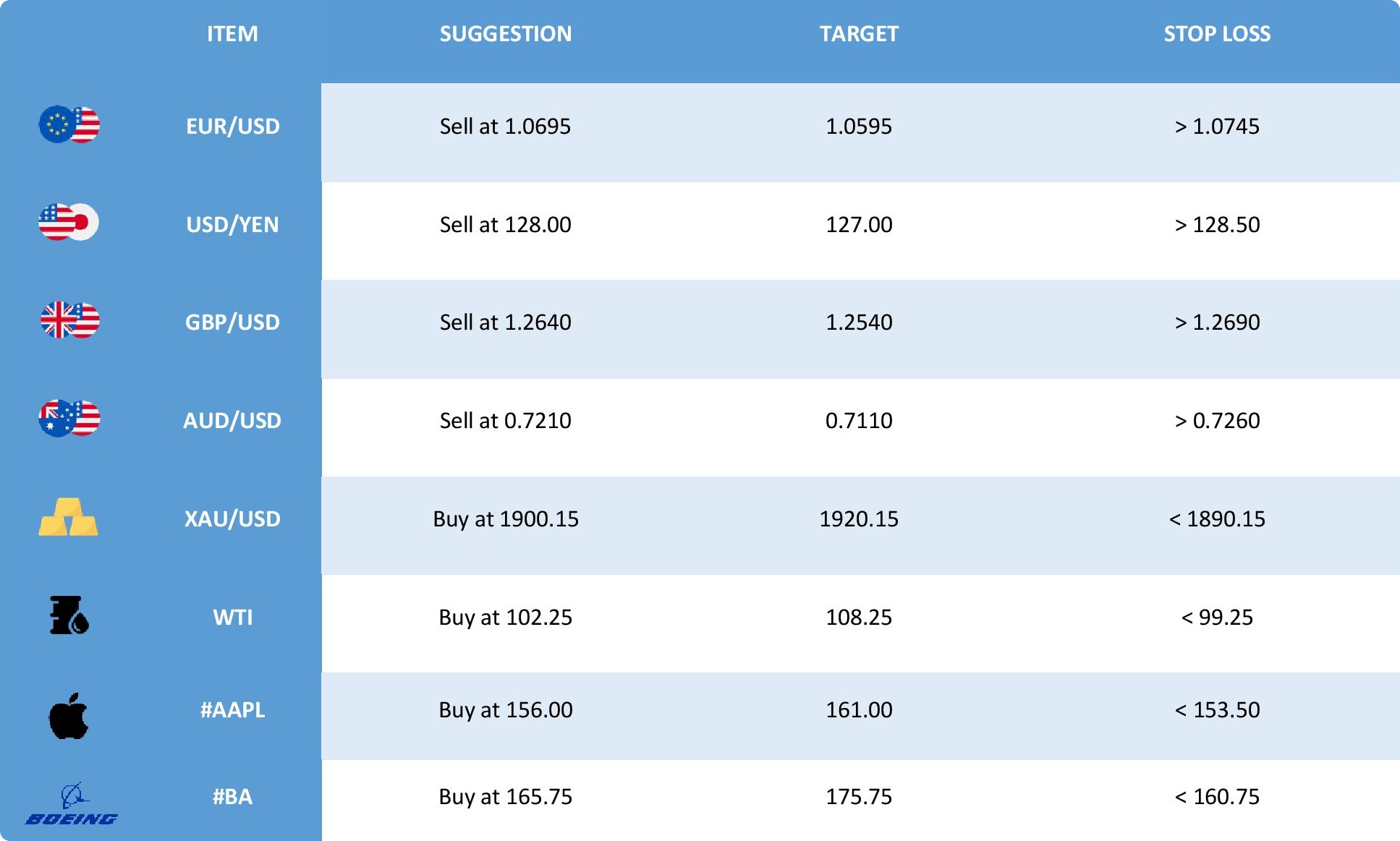 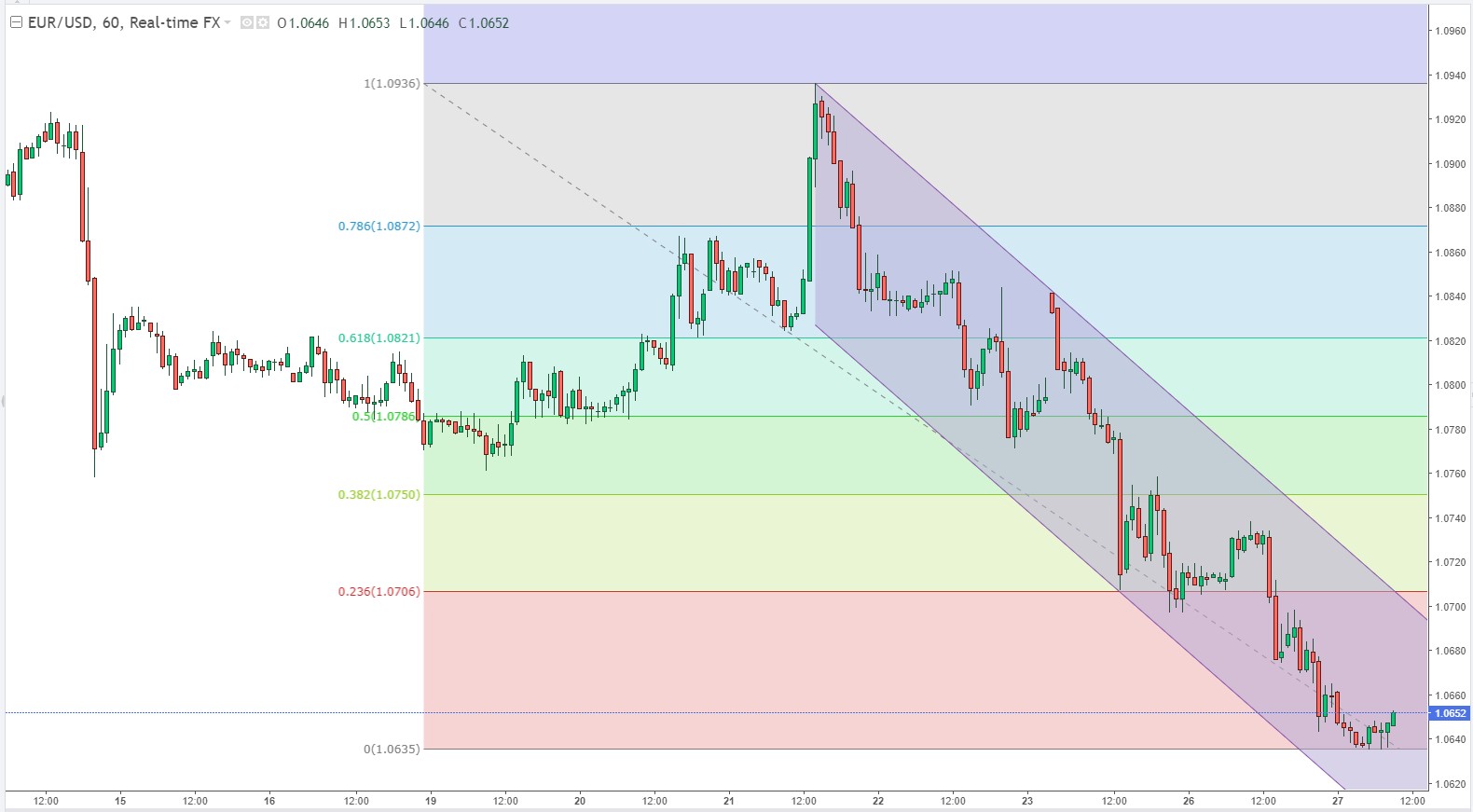 The EUR/USD is falling for the fourth consecutive day. It reached at 1.0641, a fresh cycle low, slightly above the March 2020 bottom. The move is driven by a stronger US dollar boosted by risk aversion across financial markets. Investors are concerned about central bank tightening, a slowdown in China due to lockdowns in Shanghai, the ongoing war in Ukraine and Q1 earning reports. Economic data from the US was mostly ignored by market participants that appear to focus on concerns about the outlook for the global economy. First-quarter GDP data is due on Thursday in the US and on Friday in the Eurozone. 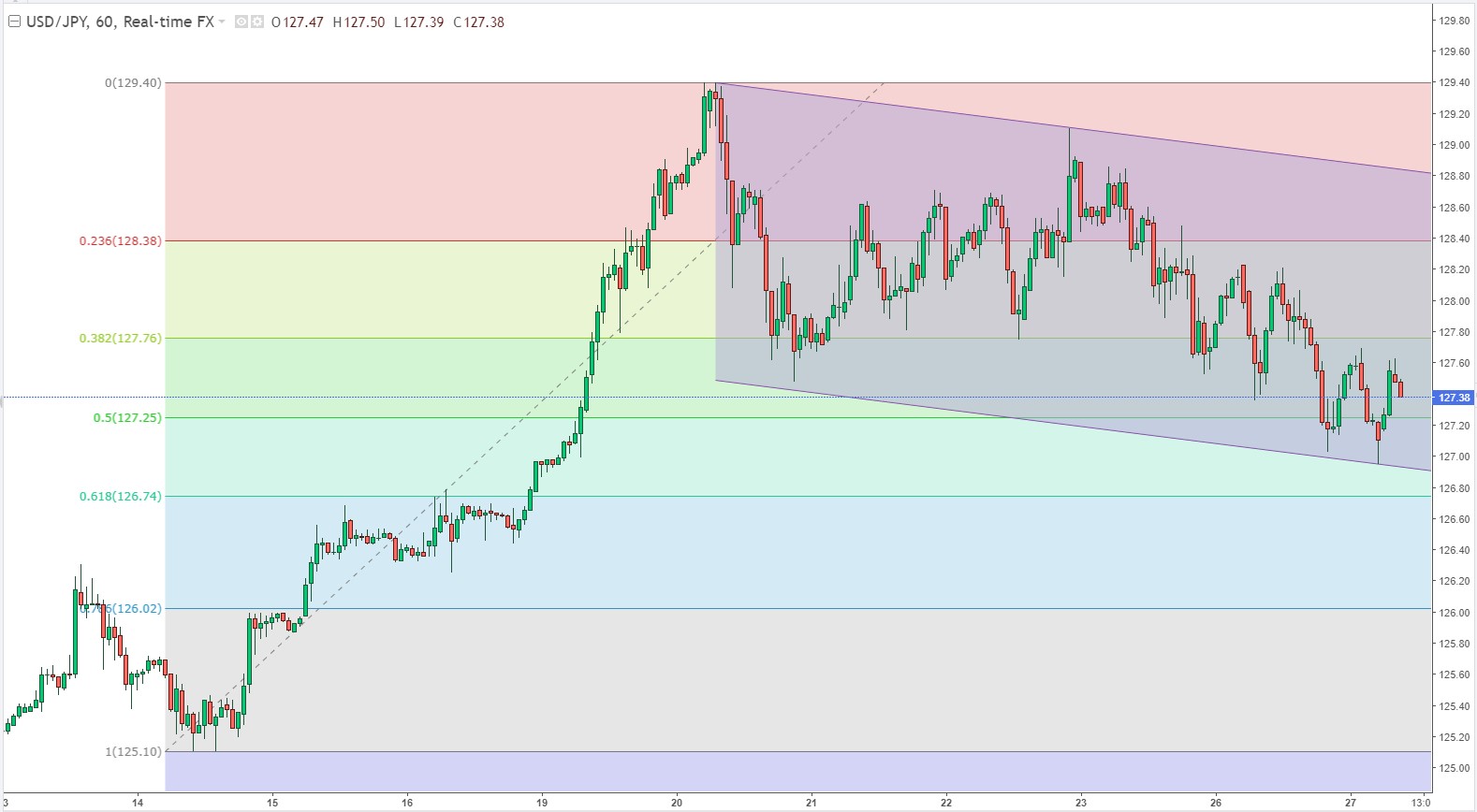 At 127.58, the price of USD/JPY is down 0.43% and was pressured to fresh bear corrective lows on Tuesday at 127.02. In recent trade, however, the US dollar has rallied and pushed the yen back to 127.63. The US dollar improved versus its major trading partners early Tuesday, with the DXY up 0.59% printing fresh cycle highs yet again. The focus will turn to the Bank of Japan meets Wednesday and Thursday and is expected to maintain its ultra-low interest rate policy. The BoJ continues to buy securities to defend its interest rate cap. 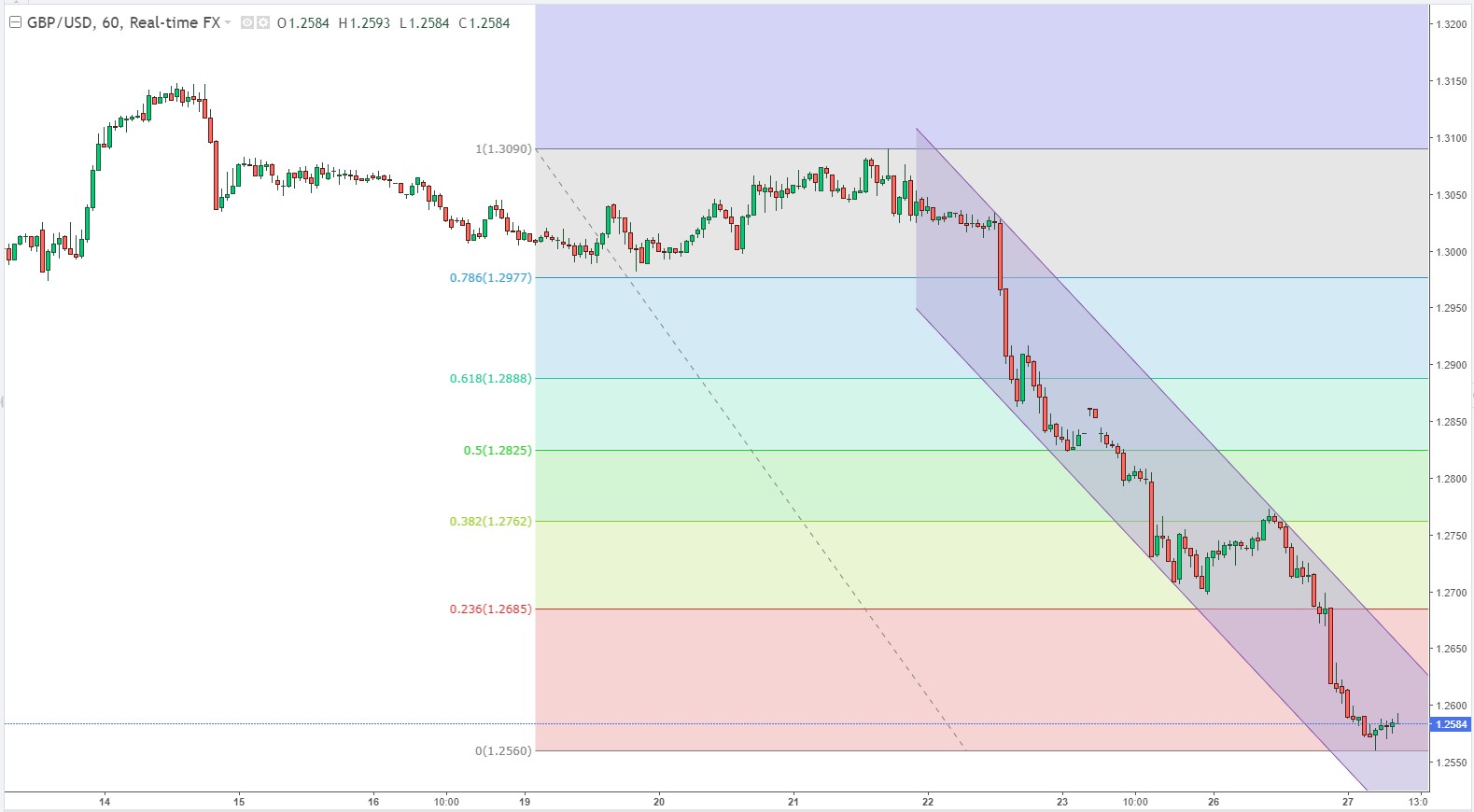 GBP/USD stretched even lower during the New York session and hit its lowest level since July 2020 below 1.2600. GBP/USD has turned south in the early European session on Tuesday after having recovered toward 1.2770 during the Asian trading hours. Despite the positive shift witnessed in risk sentiment, the pair stays on the back foot and remains poised to challenge 1.2700 one more time. Wall Street's main indexes ended up posting strong daily gains despite having opened deep in negative territory on Monday. The market mood remains upbeat with the UK's FTSE 100 Index rising more than 0.8% but the greenback shows no signs of weakness. 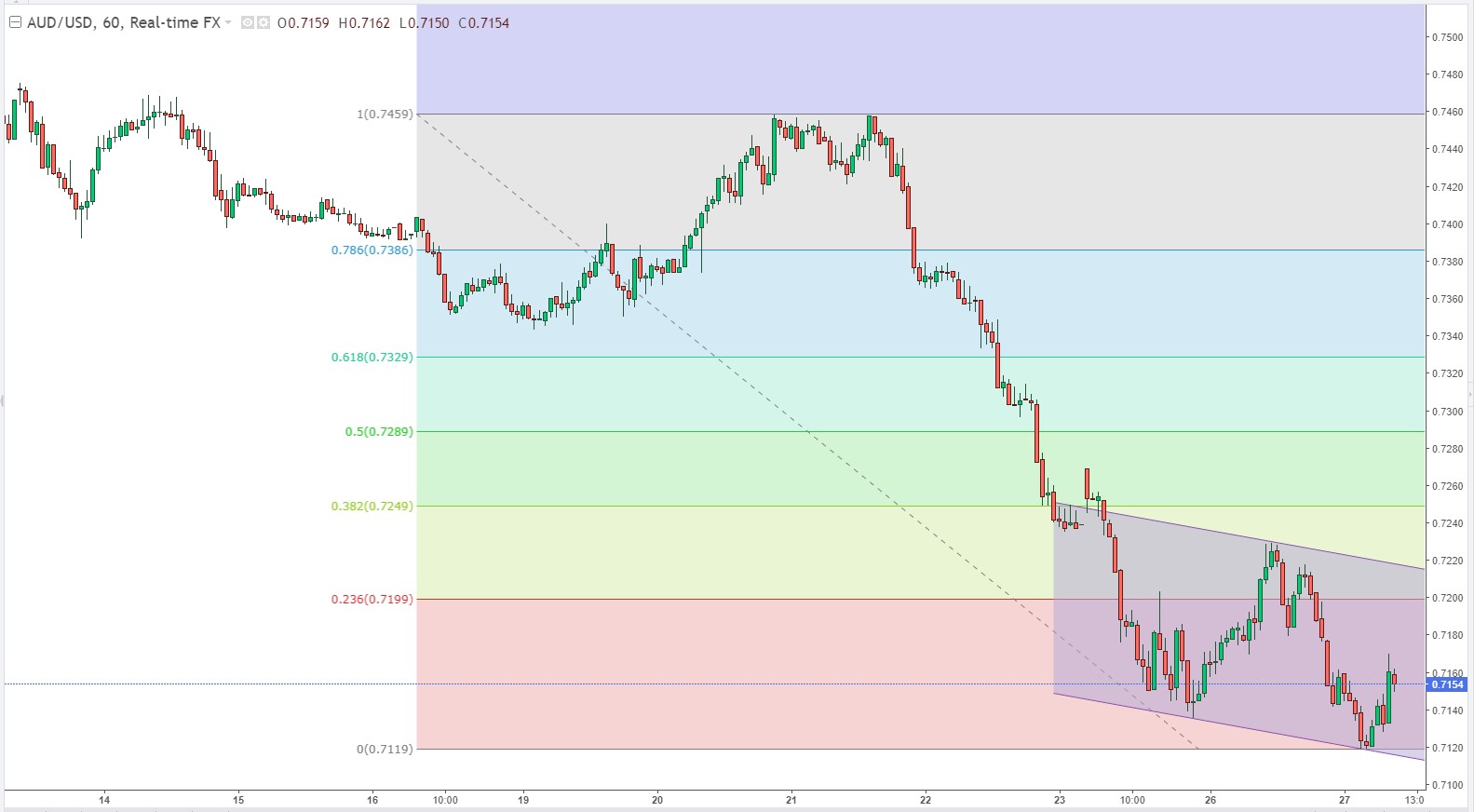 The AUD/USD falls for the fourth consecutive day and records a fresh two-month low around 0.7134, courtesy of a dismal market mood and a resilient US dollar, which extends its gains. At 0.7122, the AUD/USD is aiming toward the 0.7100 level now that March’s 15 cycle low at 0.7165 has been broken. US equities remain trading with losses as the New York session is about to end, while the CBOT Volatility Index (VIX), also called the “fear index,” rose close to 19%, up at 32.09. Meanwhile, the Ukraine-Russia conflict escalated as Gazprom halted gas deliveries to Bulgaria, while Polish firm PGNIG said Russia would stop gas deliveries starting April 27th, according to Reuters. 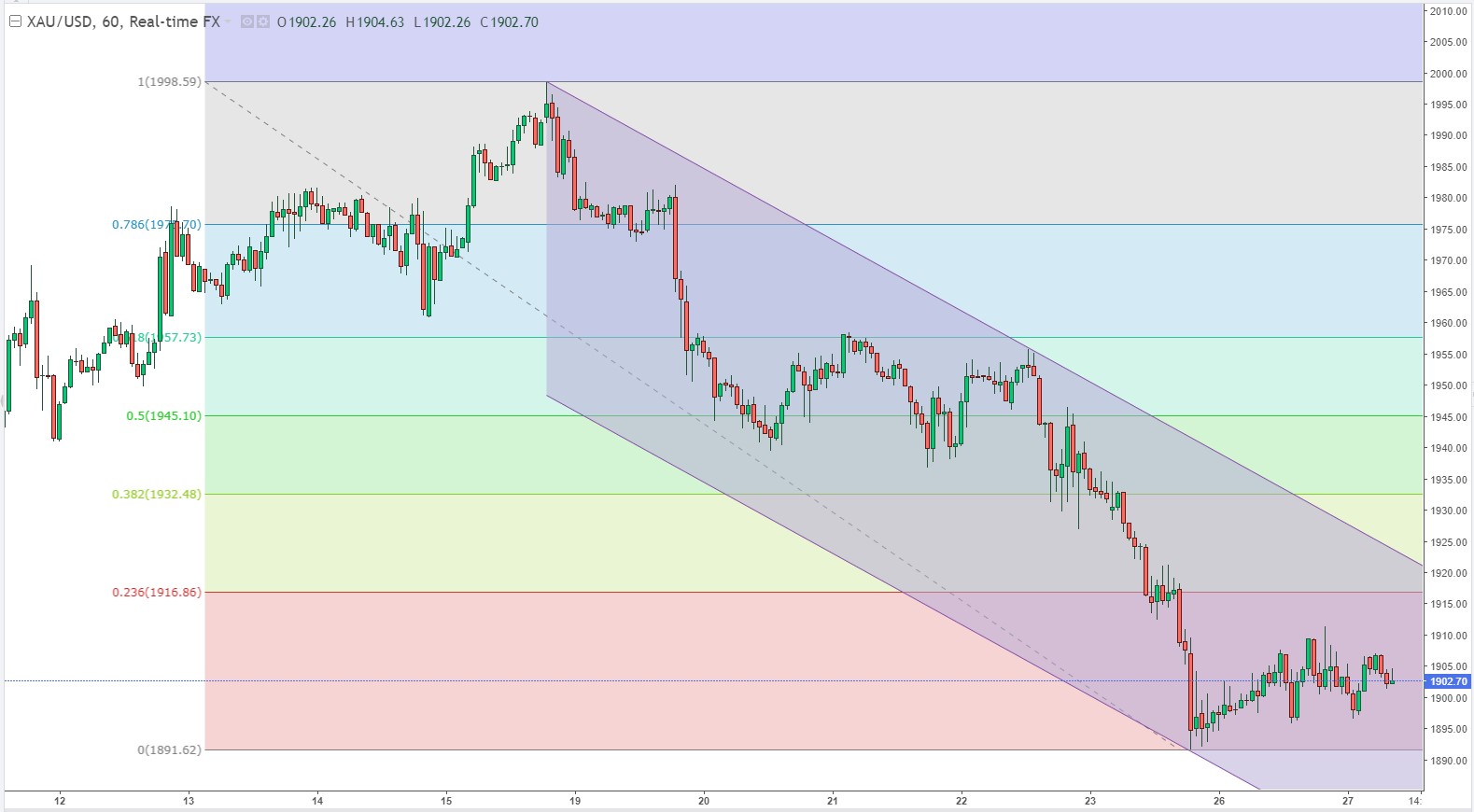 Gold rose on Tuesday, recovering slightly from a retreat to an over one-month trough in the last session, as investors sought cover from fears of stalling global growth and soaring inflation. Spot gold rose 0.4% to $1.904.36 per ounce by 10:40 a.m. ET (1440 GMT). Prices popped back above the key $1.900 level, after falling to $1.890.20 on Monday - its lowest since March 29. While gold is considered a hedge against inflation and economic and political risks, The Fed is expected to raise rates by a half a percentage point at each of its next two meetings. But at the same time, this left markets worried that the aggressive tightening could derail the global economy. 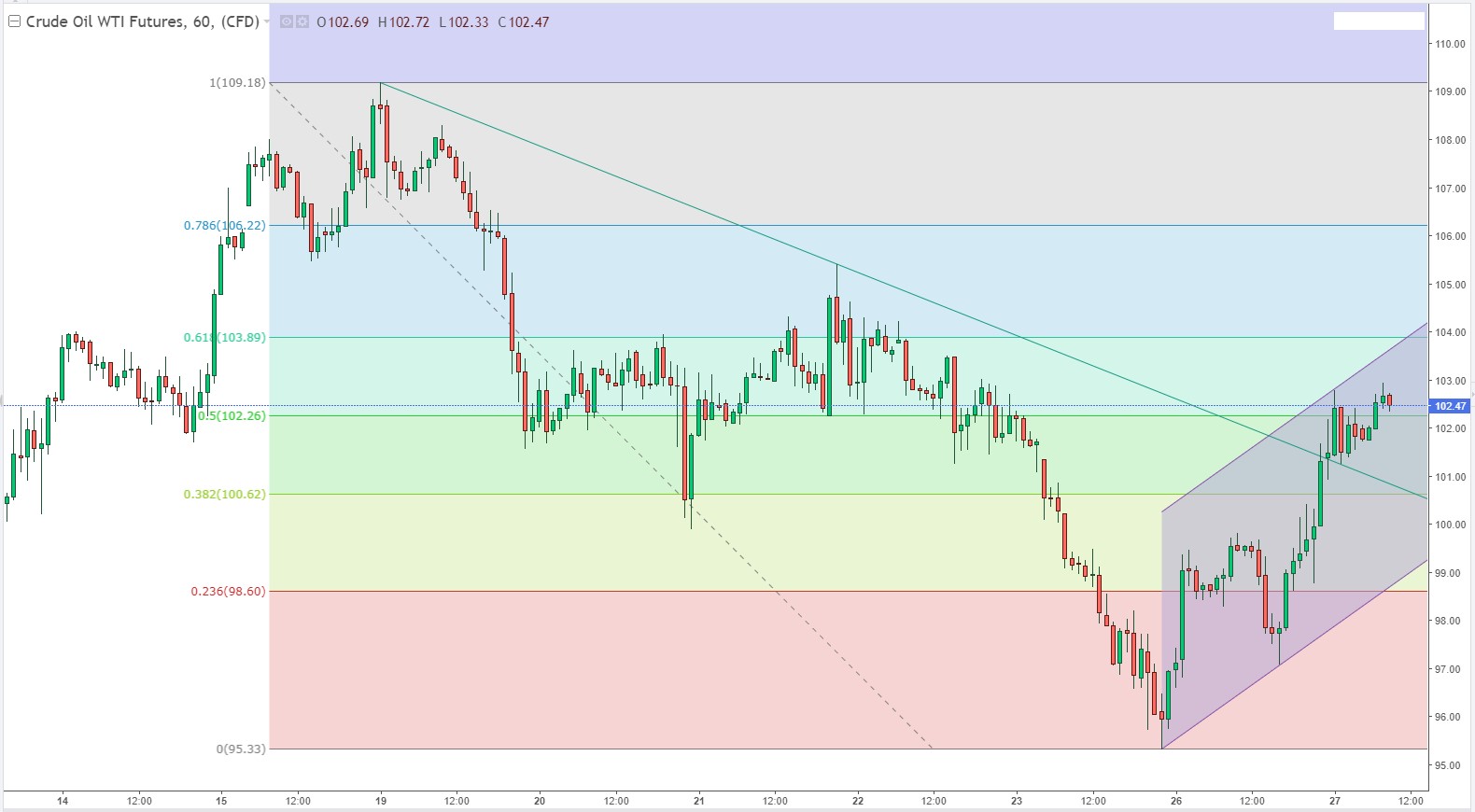 Oil prices opened slightly higher on Tuesday, after falling sharply the prior session on worries that continued Covid-19 lockdowns in China would eat into demand and as the U.S. dollar rose to a two-year high. Brent crude futures settled 2.6% higher at $104.99 per barrel and U.S. West Texas Intermediate contracts settled the day 3.2%, or $3.16, higher at $101.70 per barrel. Both contracts had settled down around 4% on Monday, with Brent down as much as $7 a barrel in the session and WTI dipping roughly $6 a barrel. 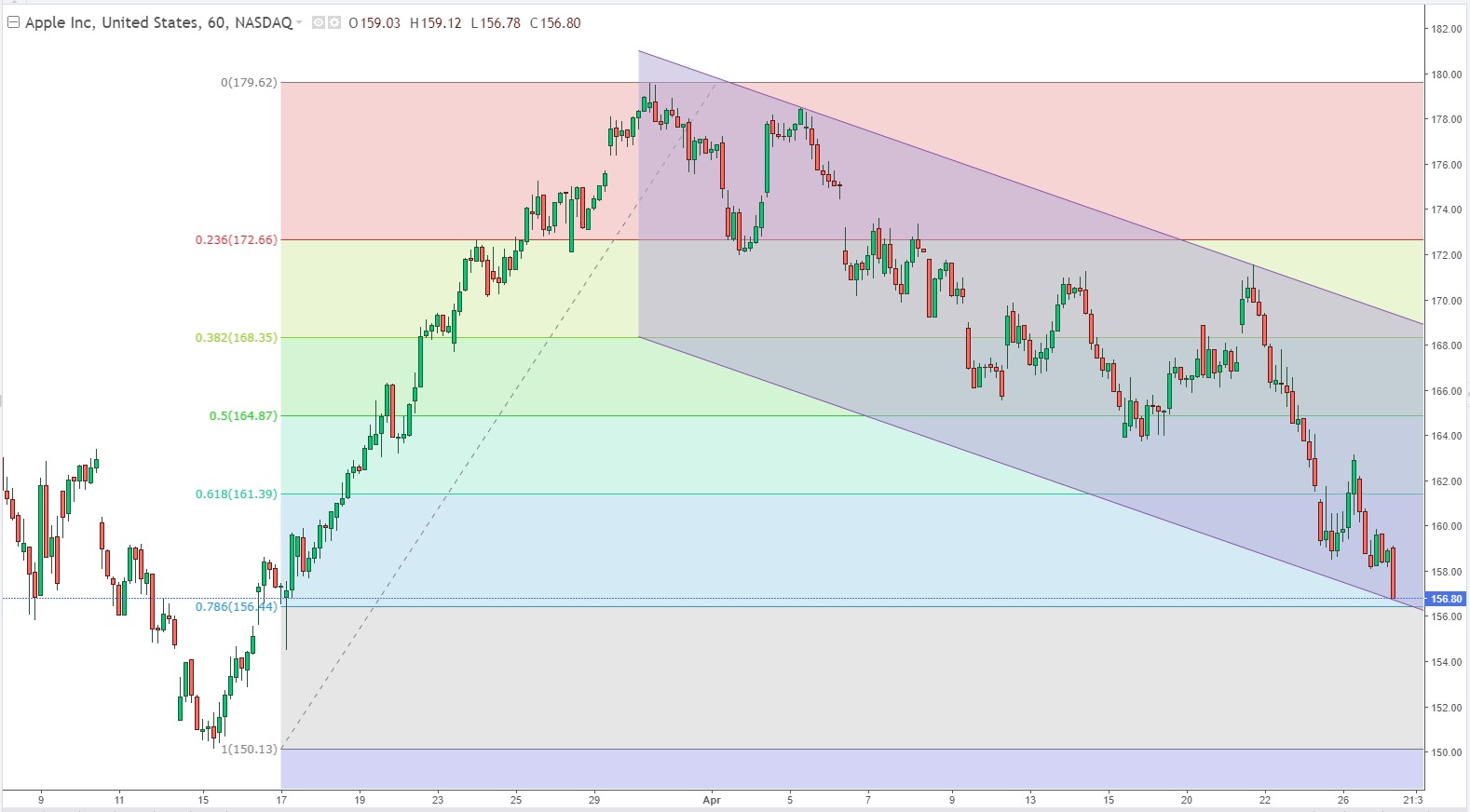 Apple AAPL is set to report second-quarter fiscal 2022 results on Apr 28. Apple expects revenue growth rate to decelerate from the December quarter, The Zacks Consensus Estimate for revenues is currently pegged at $94.79 billion, indicating growth of 5.82% from the year-ago quarter’s reported figure. Apple’s earnings beat the Zacks Consensus Estimate in three of the trailing four quarters and was in line with the remaining one, the earnings surprise being 20.28%, on average. AAPL stock lower 6.08 (-3.73%) closed at 156.80 on Tuesday 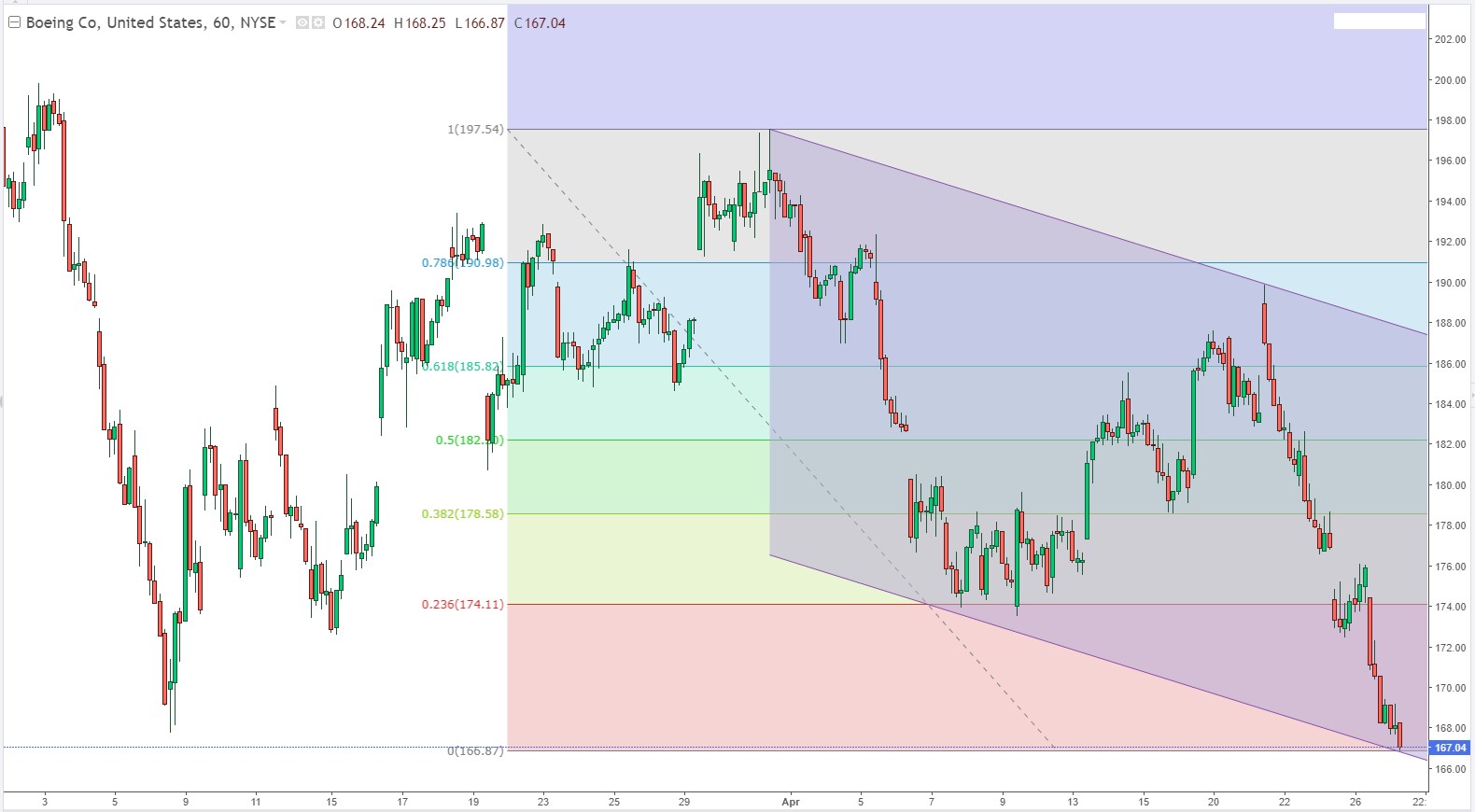 Boeing’s first-quarter 2022 results are scheduled to be released on Apr 27. With the U.S. administration spending significantly on the nation’s defense in recent years, Boeing’s defense and space unit has been witnessing solid order flow from the Pentagon, NASA and Congress for its various products. Keeping up with this usual trend, the BDS unit won some significant orders during the first quarter. These included a $1.64 billion deal for the repair, replacement, required availability, configuration management, and inventory management to support V-22 aircraft. BA stock lower 8.87 (-5.04%) closed at 167.04 on Tuesday.