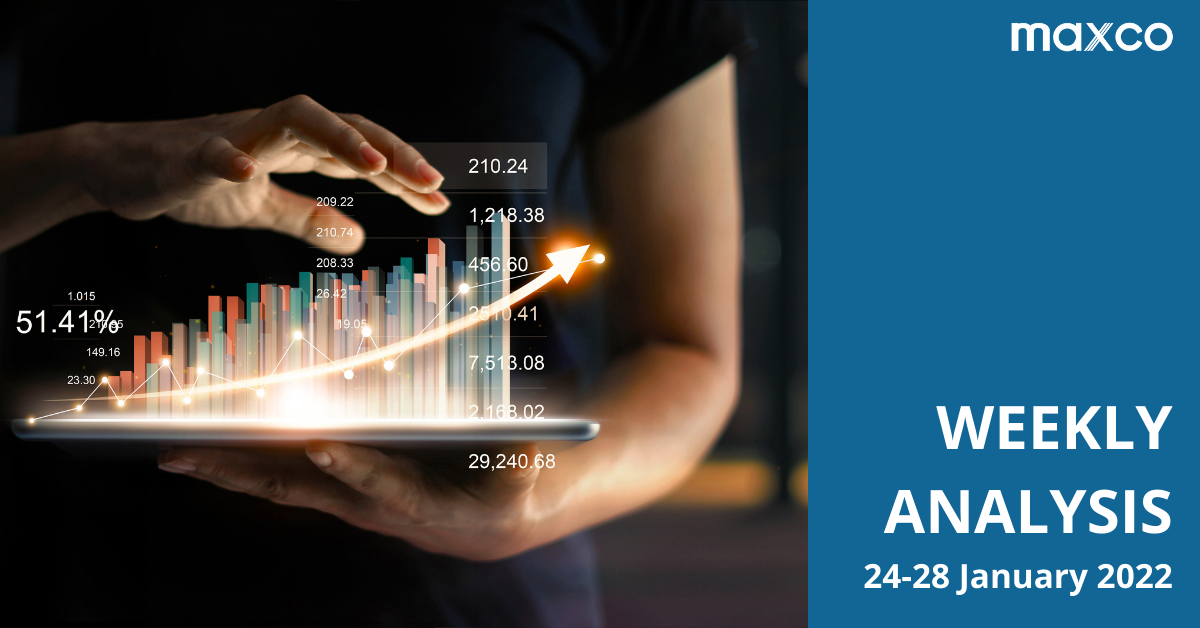 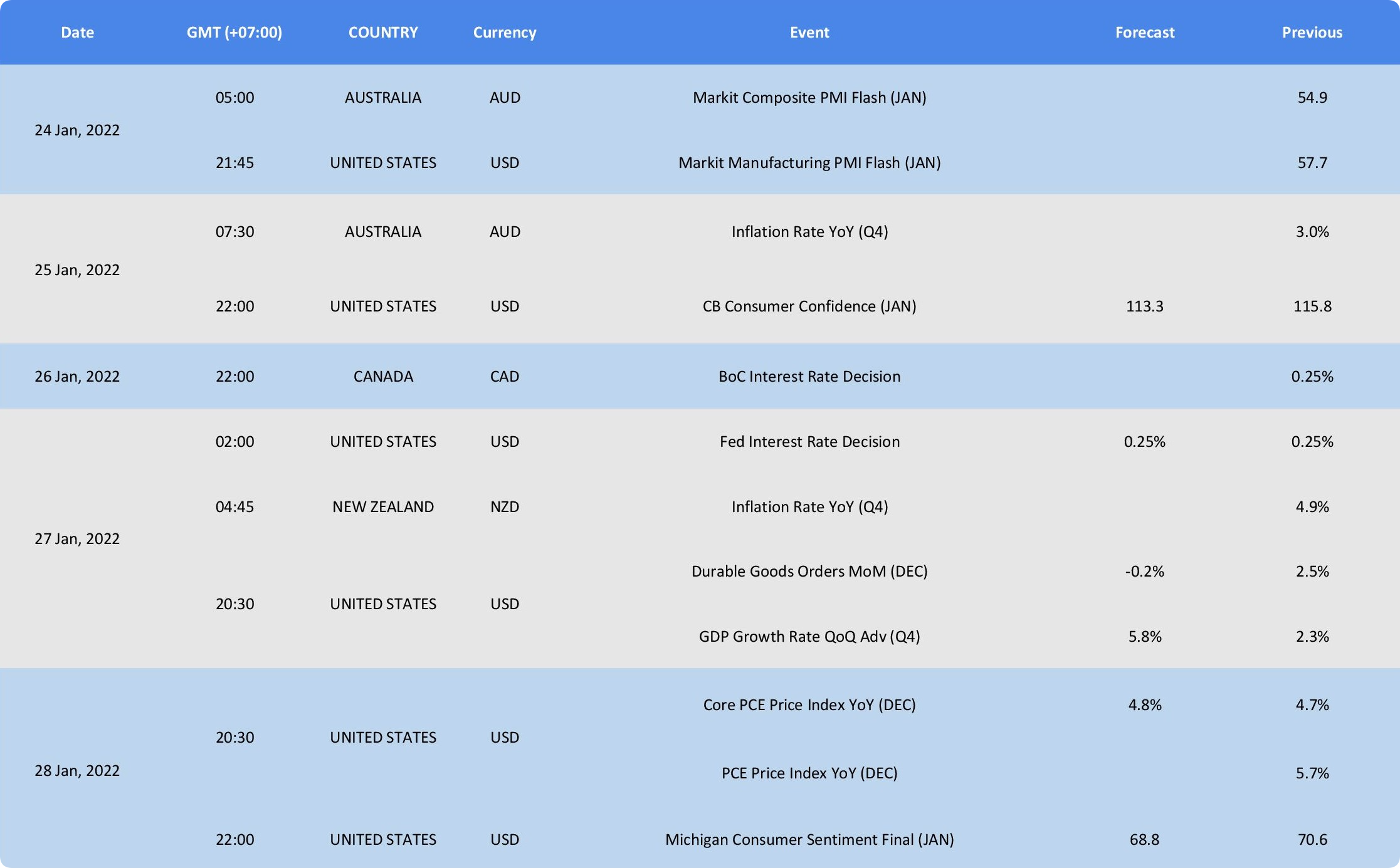 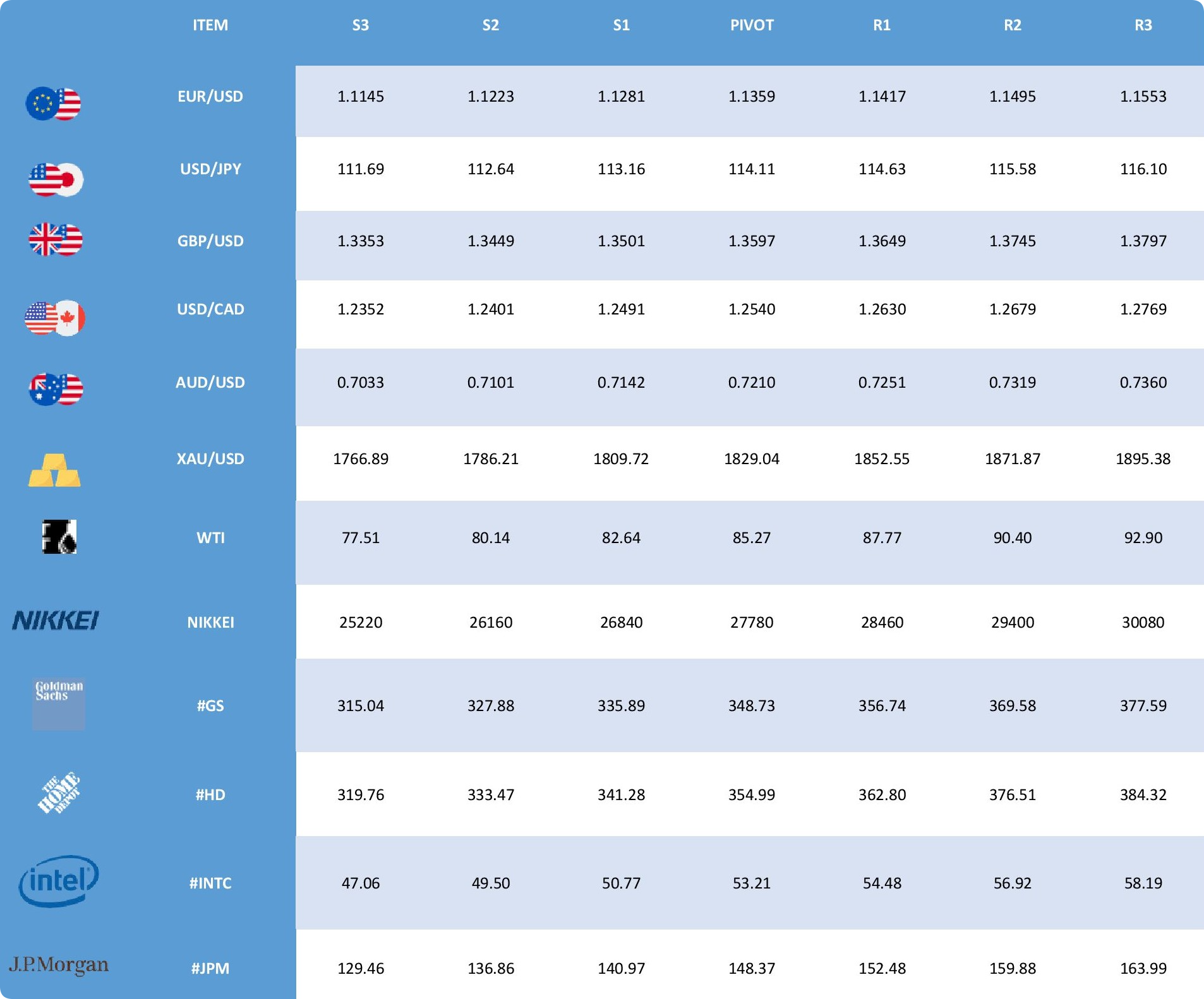 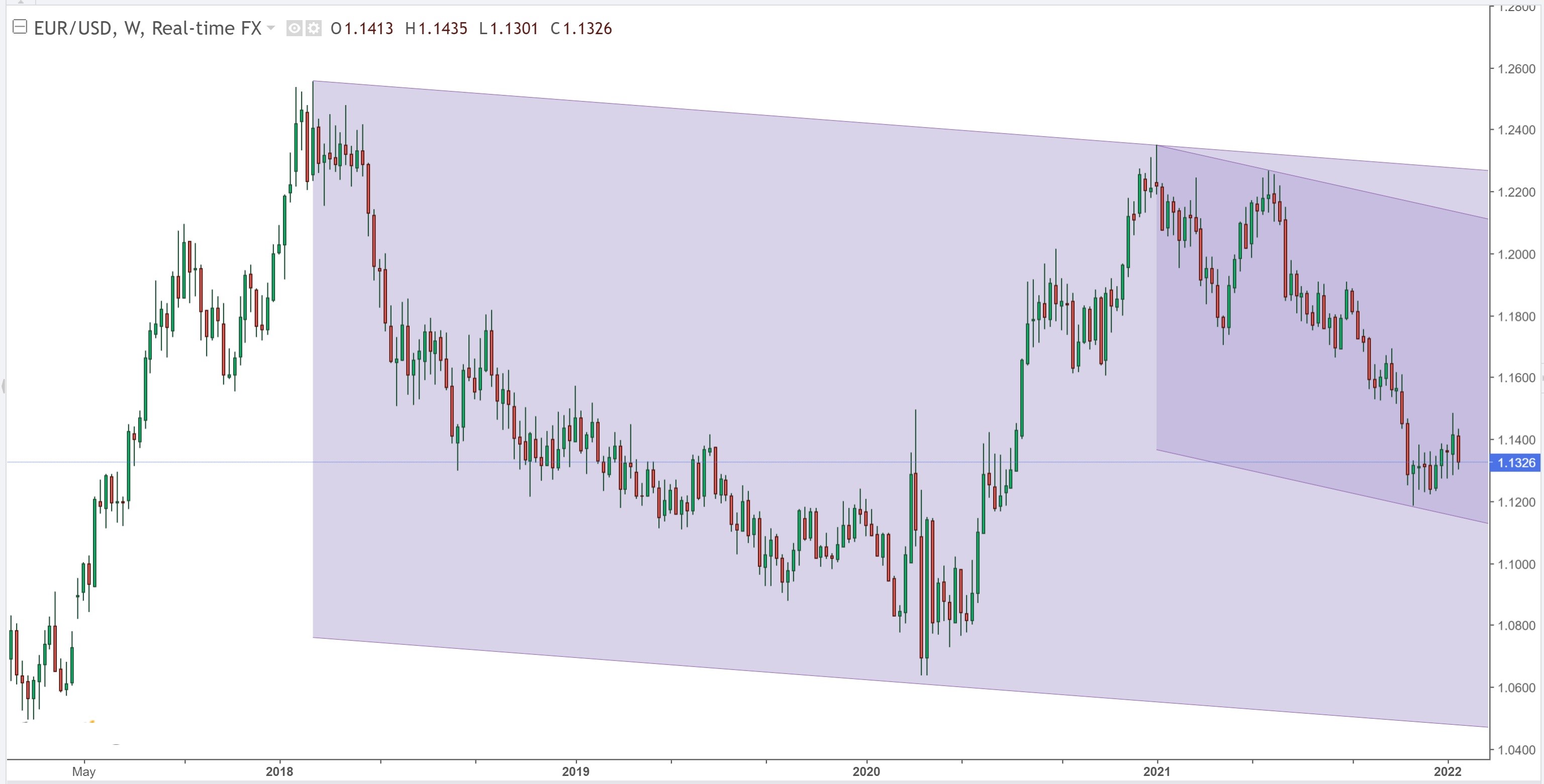 The breakout in EUR/USD saw prices jump into the next zone of resistance, plotted from the Fibonacci level at 1.1448 up to the psychological level of 1.1500. As that breakout happened, the US Dollar quickly moved into oversold territory, which helped both USD to set support as EUR/USD began drop from that key spot of resistance.

Traders are keeping a watchful eye on the FOMC rate decision on the economic calendar for next Wednesday, attempting to get clues for just how hawkish the Fed might be for the remainder of this year. But, this morning’s European CPI print didn’t cause for much alarm and since then sellers have started to re-appear in EUR/USD. Prices in the pair are now testing the support trend line that had helped to make the ascending triangle formation, just ahead of last week’s breakout. 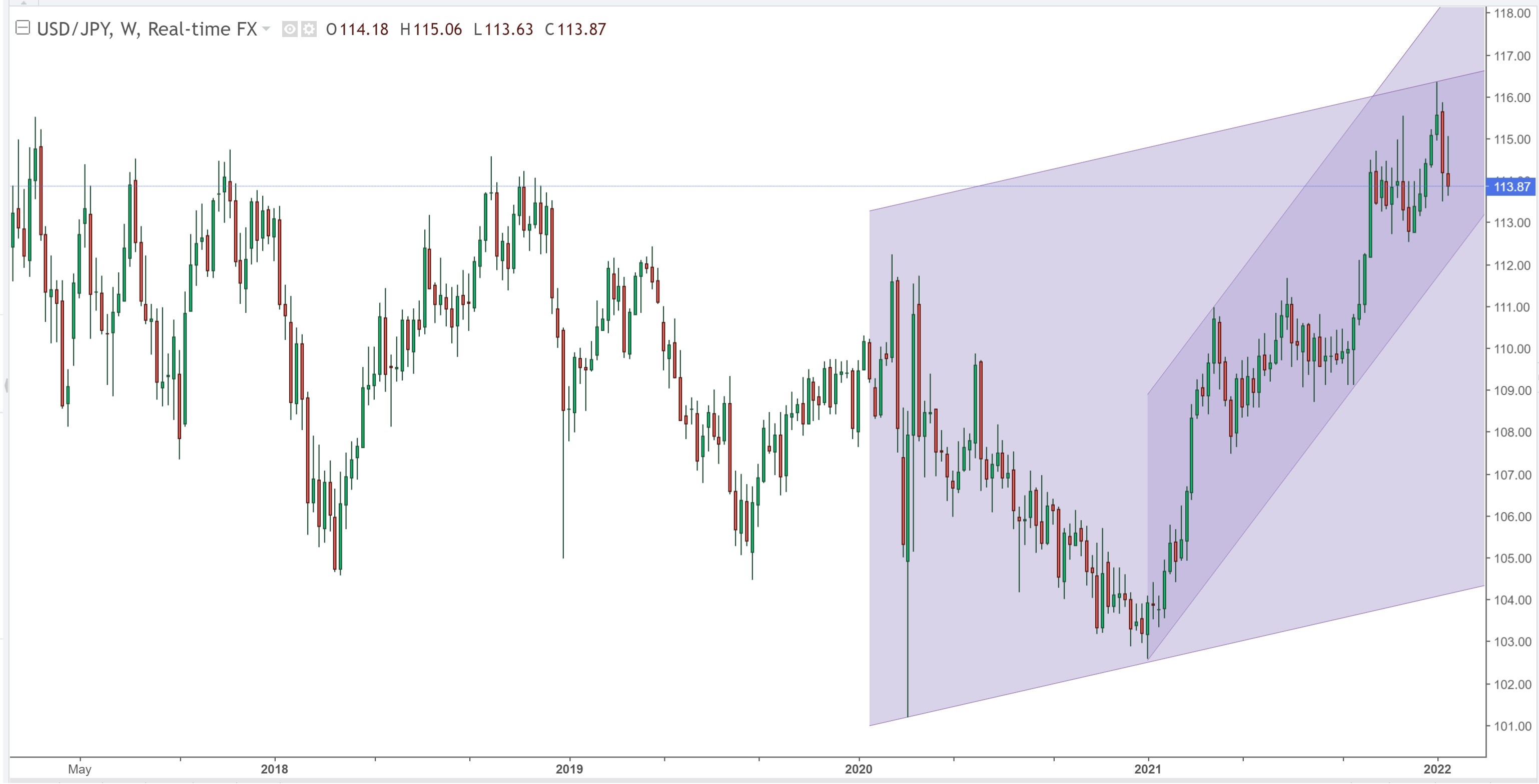 USD/JPY bounces back from a fresh weekly low 113.96 amid the rebound in global equity prices, and the exchange rate may consolidate over the coming days as it appears to be defending the monthly low 113.48.

It remains to be seen if swings in market sentiment will influence USD/JPY during the Fed’s blackout period as it failed to track the recent advance in longer-dated US Treasury yield, but speculation for an imminent shift in US policy may keep the exchange rate afloat as the Bank of Japan (BoJ) sticks to its easing cycle. 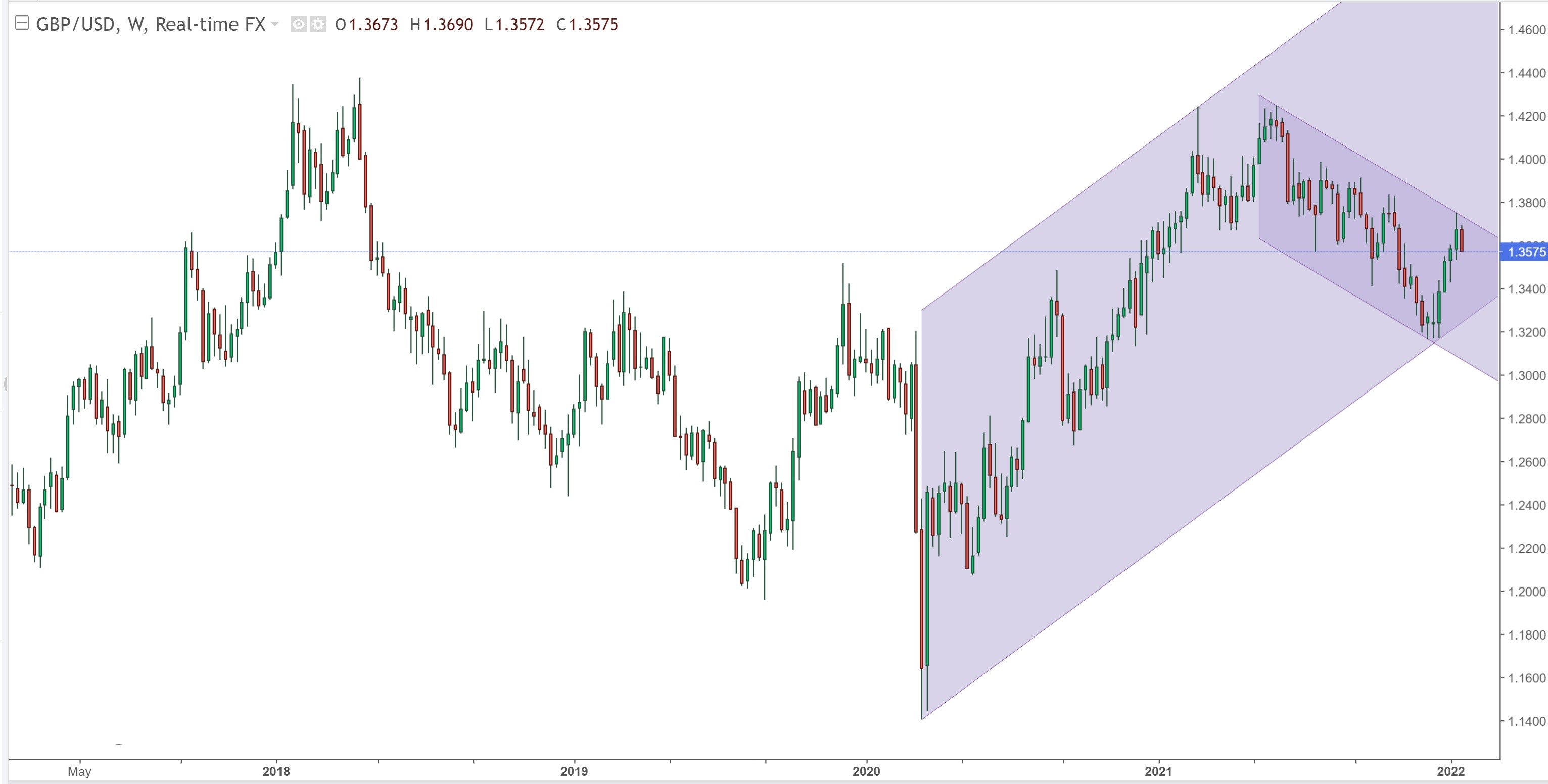 GBP/USD has been choppy on Thursday with the US dollar seeing a mixed reaction to weaker than expected initial jobless claims and housing data, though the pair has for the most part remained well supported to the north of the 1.3600 level. At current levels in the 1.3620s, cable looks on course to post an on-the-day gain of about 0.1% or roughly 20 pips.

Friday’s UK December Retail Sales report is the only remaining tier-one data of note to cable this week. The data is unlikely to dissuade market participants from pricing in a high likelihood that the BoE hikes interest rate by another 25bps on February 3 in wake of this week’s strong UK labour market and hotter than expected inflation data. That should be enough to keep sterling supported until the end of the week, but traders should also note that the US dollar also faces upside risks in the coming days as traders brace for next week’s Fed meeting. The US central bank is expected to endorse money market pricing for as many as four rate hikes in 2022 and give the green light to a rate hike as soon as March. 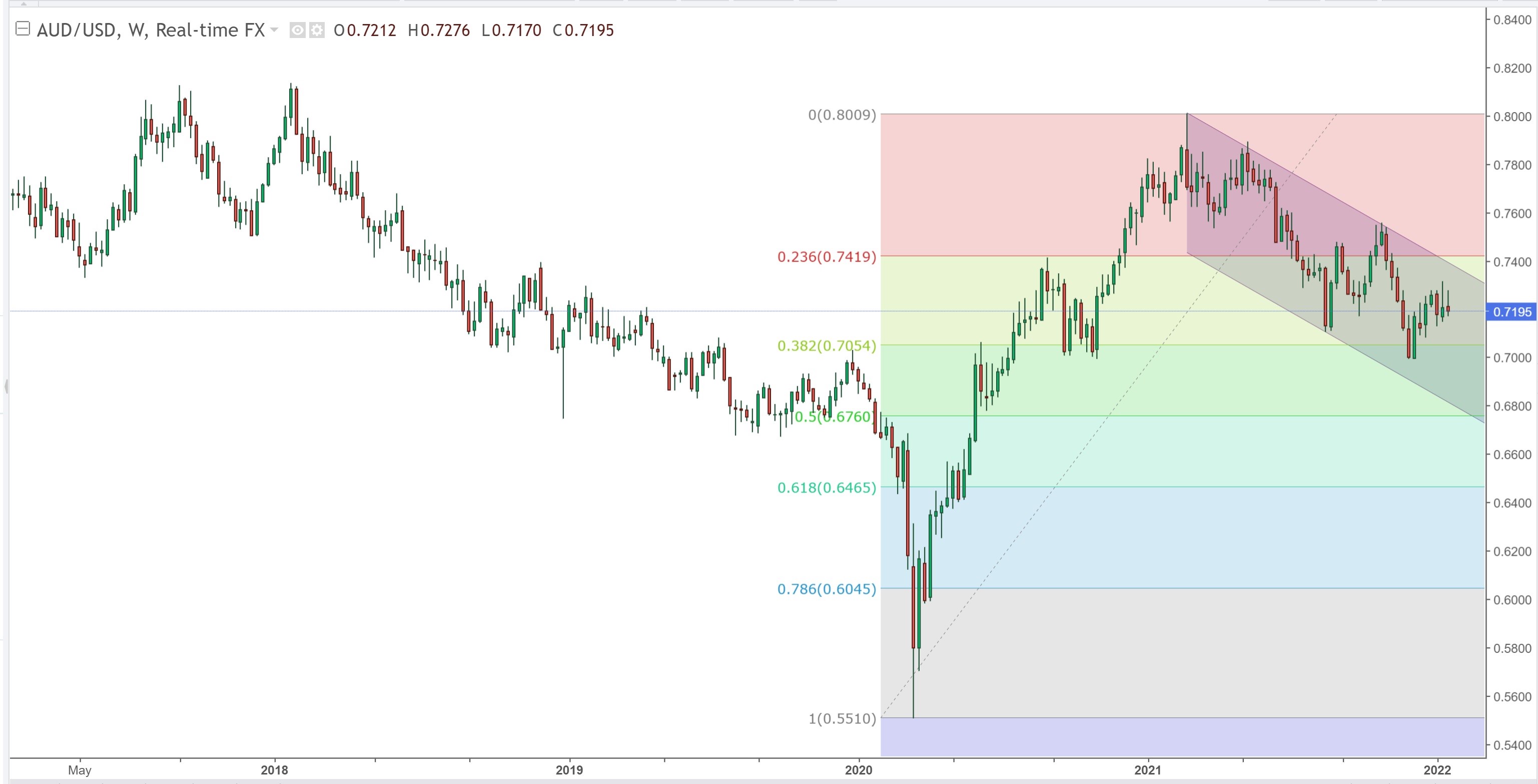 The Australian dollar is lining up for an extended move against the greenback, but conflicting factors make it difficult to predict the direction with any degree of confidence. Strong gains in key commodities due to supply concerns have underpinned the Australian dollar since the start of 2022 .

Domestic economic data has surprised to the upside despite the surge in COVID-19 infections and Thursday's much better-than-expected December jobs data led to a hawkish turn in Reserve Bank of Australia expectations. The AUD/USD is in a pennant formation with a supporting trend-line at 0.7186 and top-line resistance at 0.7287. A break of either trend-line would likely see significant follow-through. 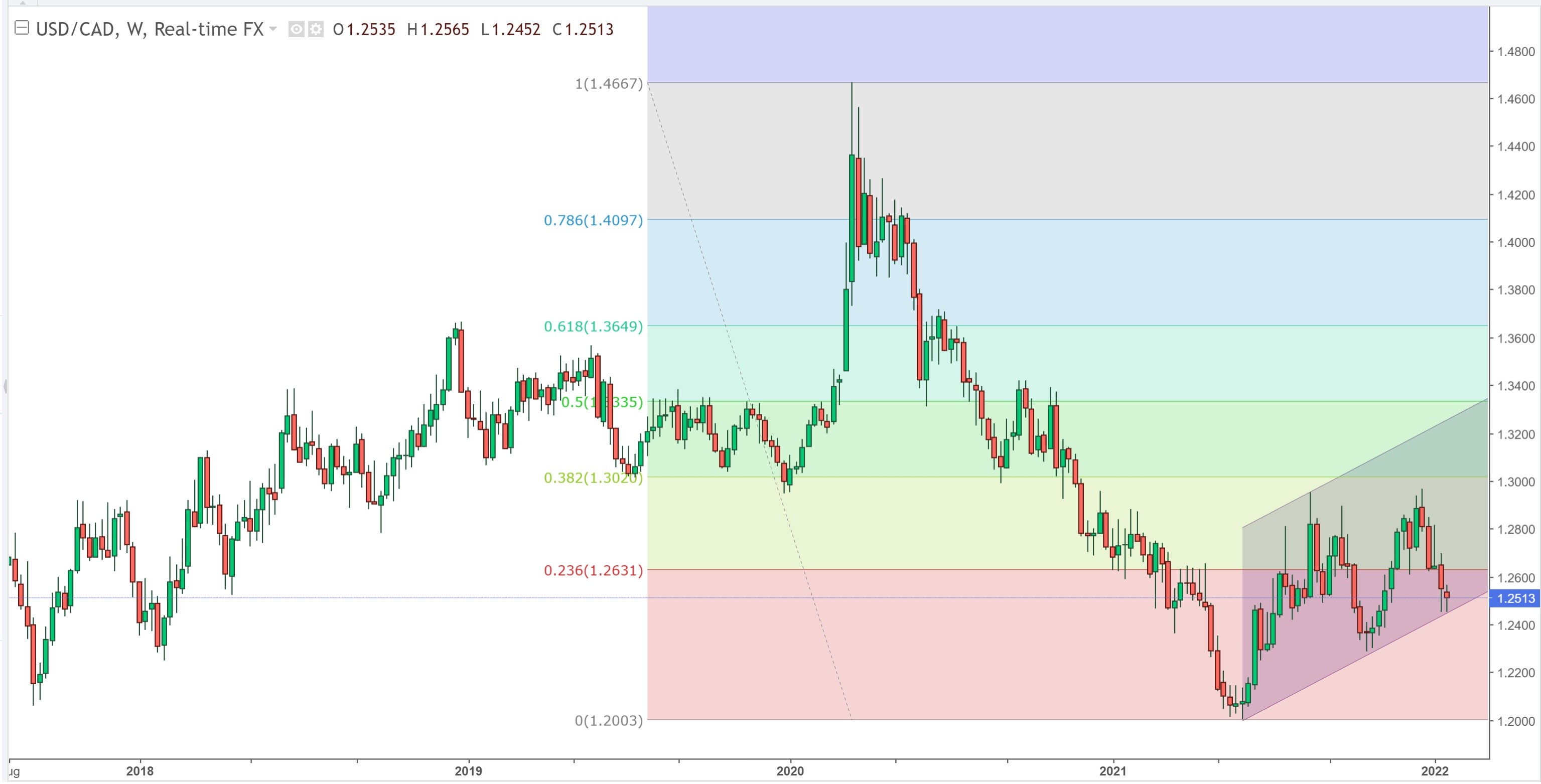 The Canadian Dollar rallied more than 0.50% against the US Dollar since the start of the week with USD /CAD continuing to press a key technical support pivot. Once again we're on inflection watch with the bears vulnerable into this zone. These are the updated targets and invalidation levels that matter on the USD /CAD price charts. Review my latest Strategy Webinar for an in-depth breakdown of this Loonie technical setup and more.

Technical Outlook: In last week Canadian Dollar Price Outlook we noted that the a break of the “monthly open / opening-range lows taking price towards a key support zone at the 78.6% Fibonacci retracement of the October rally / 100% extension of the December decline at 1.2432/70.” This threshold has continued to limit the downside and the focus remains on possible inflection in the days ahead. It's make-or-break here. 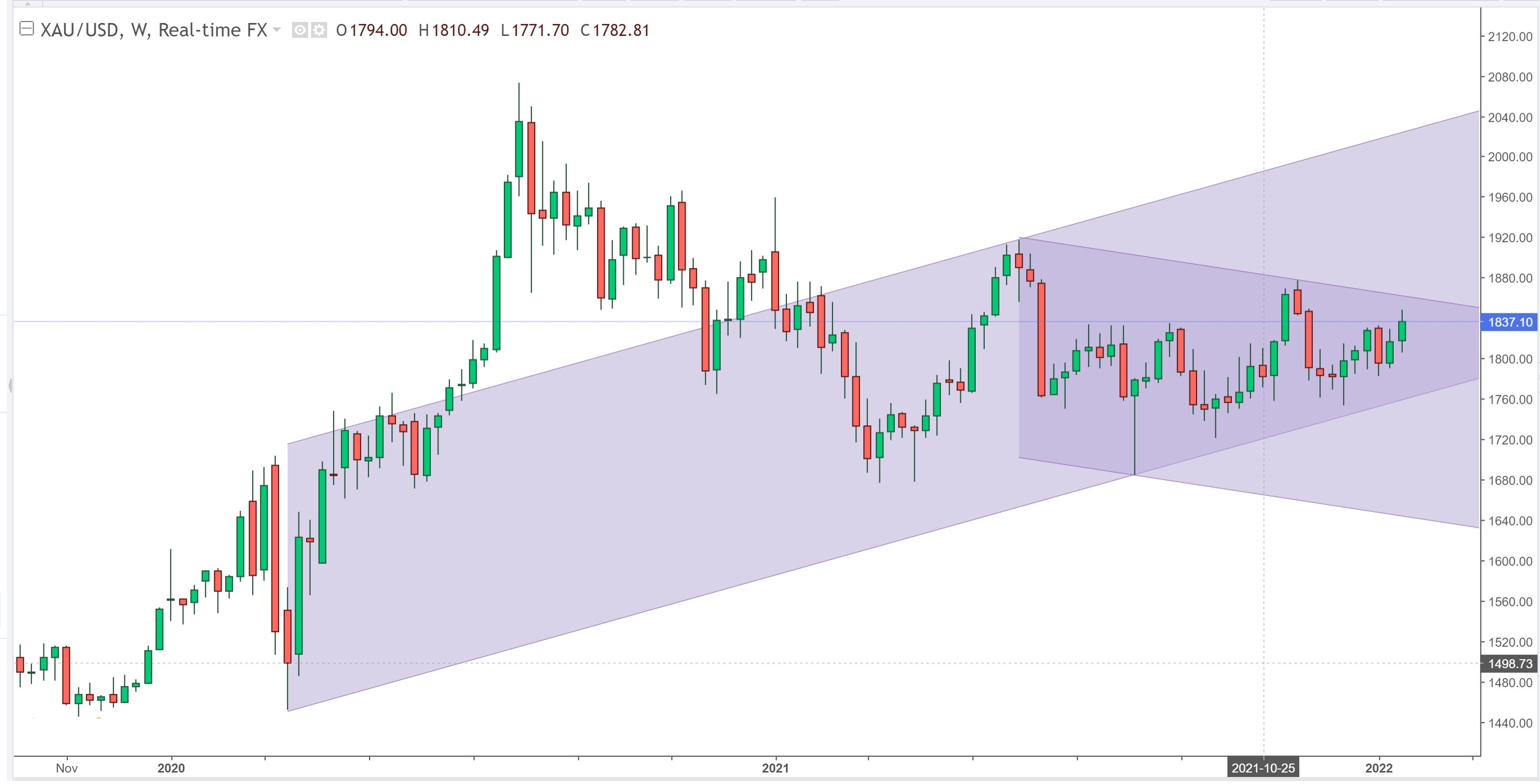 The Technical Confluences Detector shows that the gold price is battling the key hurdle around $1.842 comprising a cluster of SMA10 four-hour, Fibonacci 38.2% one-day and Bollinger Band Upper on the daily formation. Should the bulls get a bit more support from softer USD and yields, they can easily cross the $1.842 hurdle, which in turn will allow them to aim for the $1.856 hurdle comprising Fibonacci 161.8% on one-day and Pivot Point R1 on one month.

Alternatively, if the downside pressure again intensifies, then bears could challenge critical support at $1.831, encompassing the previous month’s high. Given the gold seller’s ability to conquer the $1.831 support, a downward trajectory towards the $1.821 mark, which is the intersection of the SMA10 one-day and Fibonacci 23.6% one-week, can’t be ruled out. 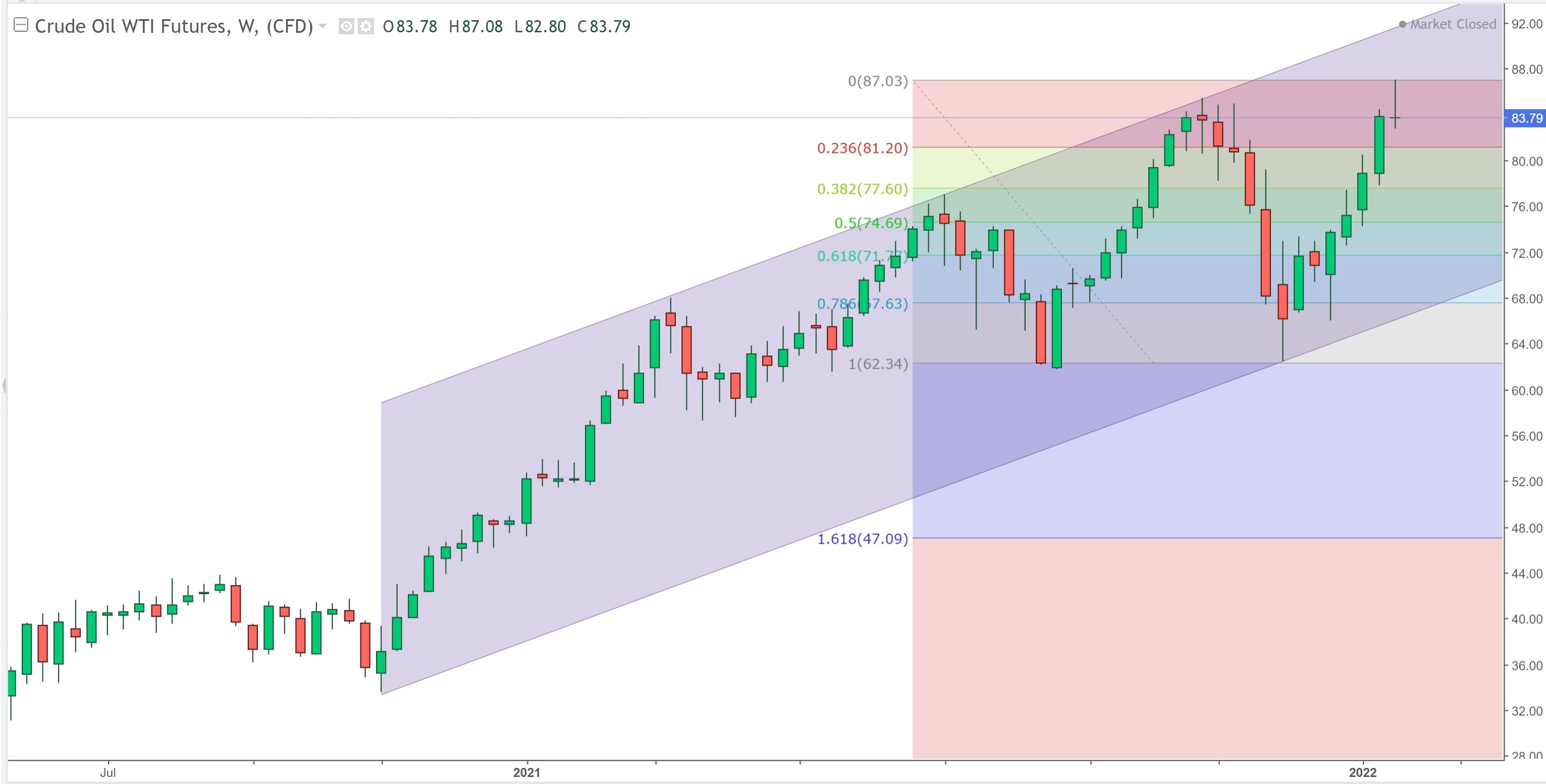 WTI Oil prices plunged on Friday, after rising to seven-year highs this week, as an increase in U.S. crude and fuel stockpiles prompted investors to take profits from the rally. U.S. West Texas Intermediate (WTI) crude futures slid $2.61, or 3.1%, to $82.94 a barrel. The contract earlier fell as much as 3.2%, also the most since Dec. 20, after rising to its highest since October 2014 on Wednesday.

Oil supply concerns mounted this week after Yemen’s Houthi group attacked the United Arab Emirates, OPEC’s third-largest producer, while Russia, the world’s second-largest oil producer, has built up a large troop presence near Ukraine’s border, stoking fears of invasion. However, the International Energy Agency (IEA) said on Wednesday that oil supply will soon overtake demand as some producers are set to pump at or above all-time highs, while demand holds up despite the spread of the omicron coronavirus variant. 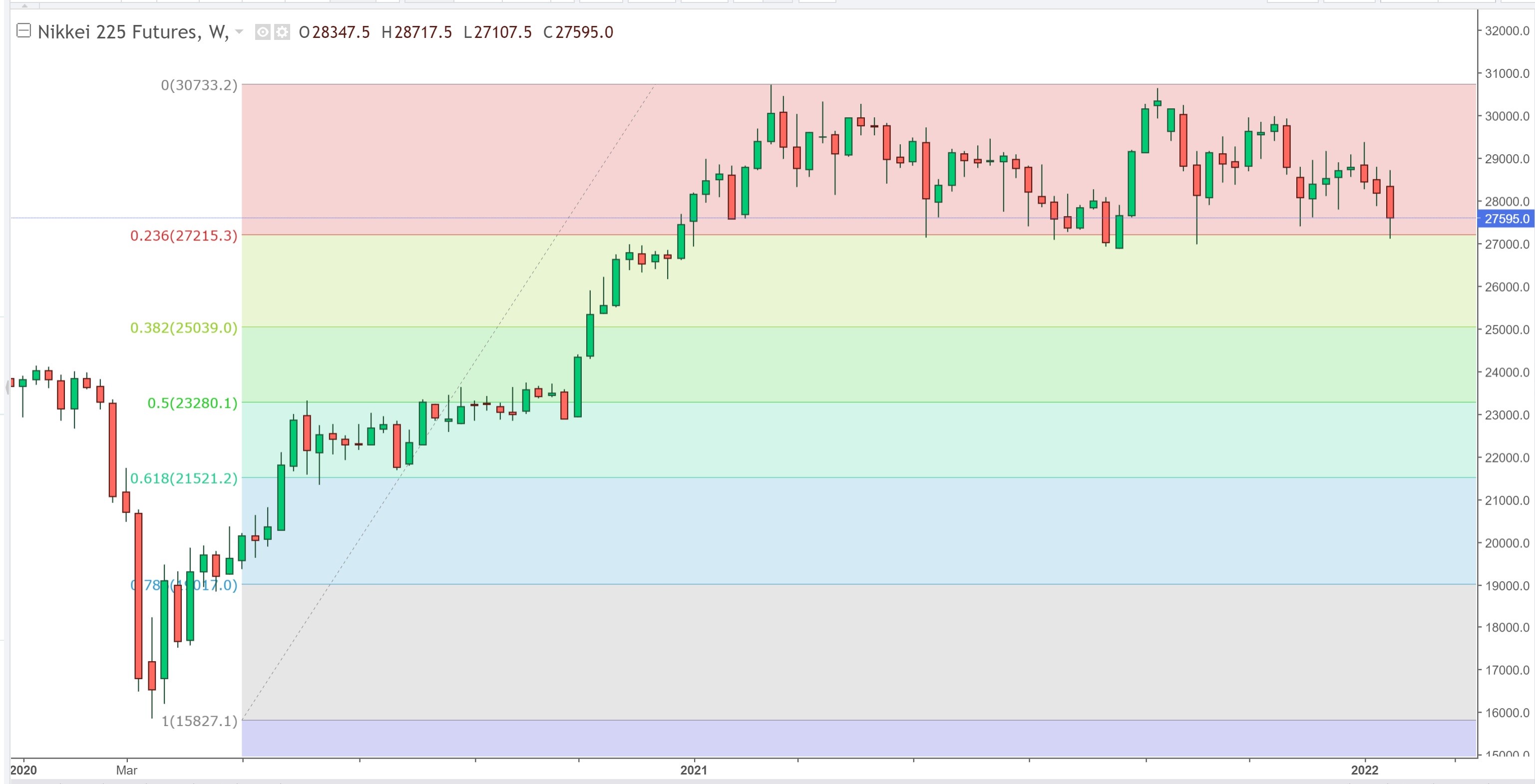 Stocks The Nikkei 225 Index fell 1.6% to around 27.327 while the broader Topix Index lost 1.3% to 1.913 on Friday, as Japanese shares tracked overnight losses on Wall Street, while investors digested the latest inflation numbers. Japan’s core consumer prices rose at the fastest annual pace in nearly 2 years at 0.5% in December amid rising fuel and raw material costs, but remained well below the 2% central bank target.

Investor sentiment was also dampened after the country’s confirmed daily Covid cases topped 46.000 on Thursday, setting a new record for a third straight day. Healthcare, financial, retail and energy firms also slumped. The Nikkei Index is on track for its third straight week of losses. 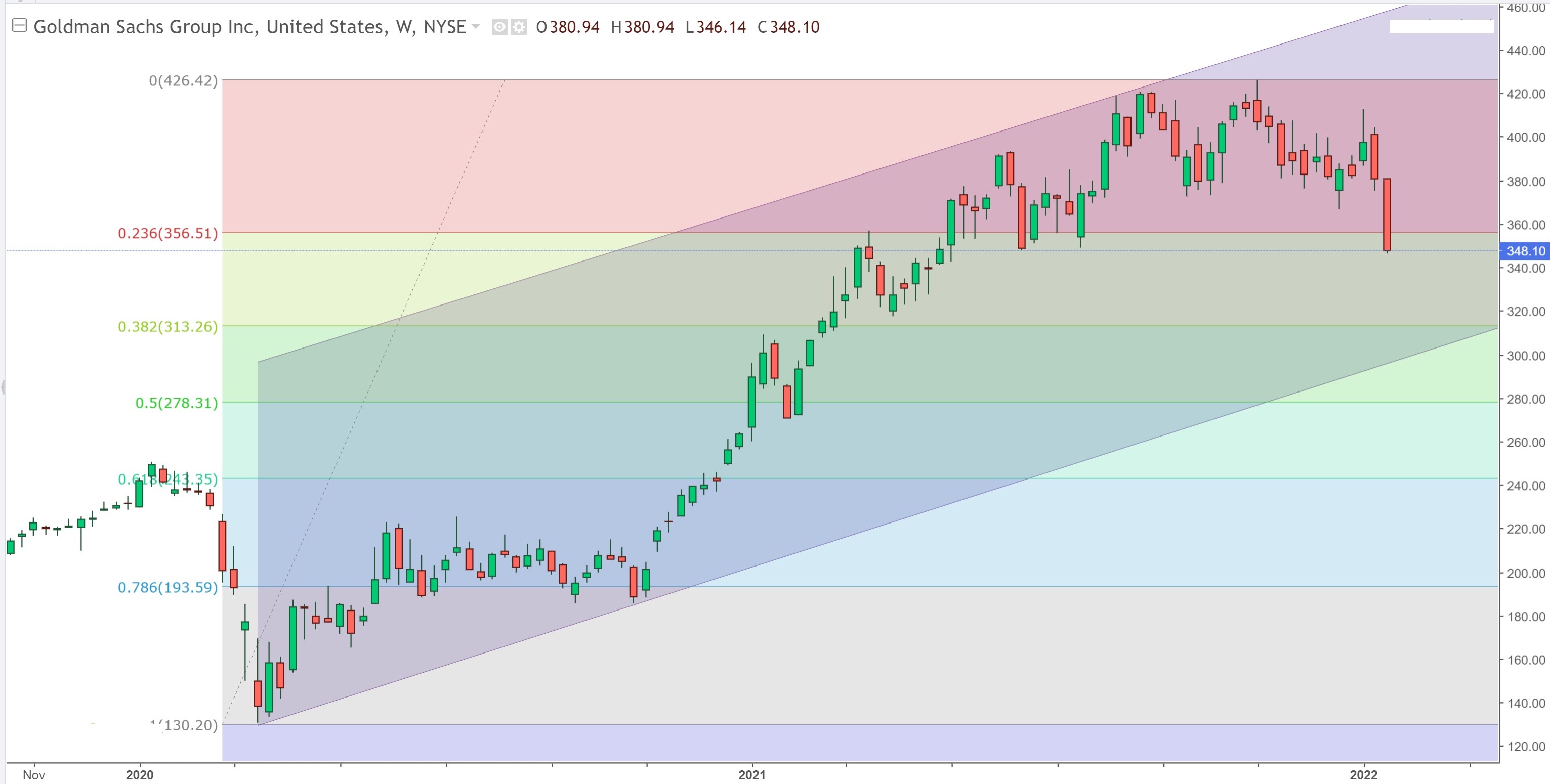 Shares of The Goldman Sachs Group, Inc. ( NYSE:GS ) have fallen sharply this week following the release of the group’s fourth quarter results. The results were weaker than expected and the market was surprised at the large increase in compensation expenses. While the company’s outlook appears subdued, the low valuation may be offering long term investors an opportunity.

· Compensation and benefits expenses at $17.7 bln, up 33% for the year and higher than expected. 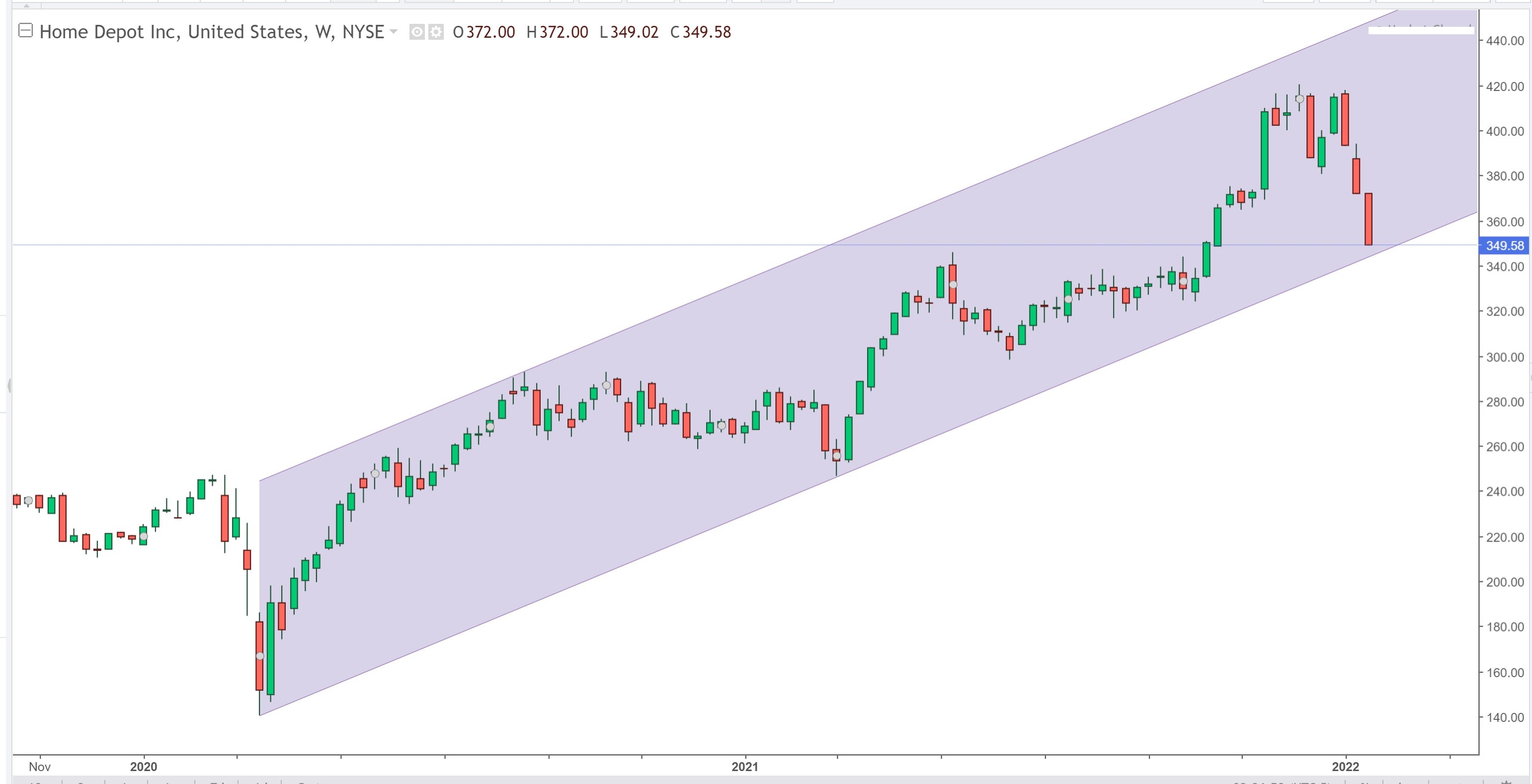 Wall Street will be looking for positivity from Home Depot as it approaches its next earnings report date. This is expected to be February 22, 2022. In that report, analysts expect Home Depot to post earnings of $3.20 per share. This would mark year-over-year growth of 16.79%. Meanwhile, the Zacks Consensus Estimate for revenue is projecting net sales of $34.61 billion, up 7.27% from the year-ago period. HD's full-year Zacks Consensus Estimates are calling for earnings of $15.47 per share and revenue of $150.01 billion. These results would represent year-over-year changes of +28.6% and +13.55%, respectively. 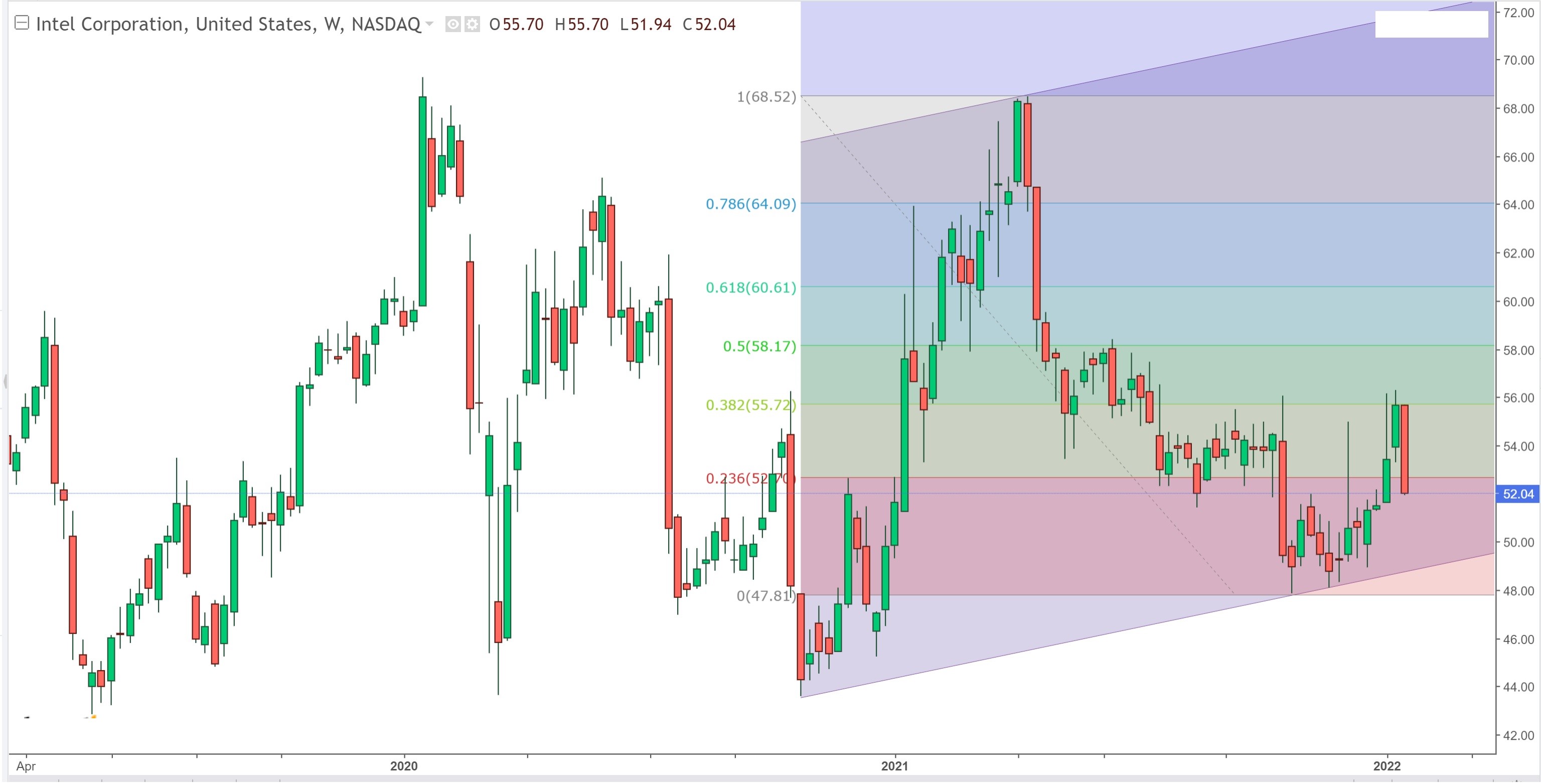 Wall Street expects a year-over-year decline in earnings on lower revenues when Intel (INTC) reports results for the quarter ended December 2021. While this widely-known consensus outlook is important in gauging the company's earnings picture, a powerful factor that could impact its near-term stock price is how the actual results compare to these estimates.The earnings report, which is expected to be released on January 26, 2022, might help the stock move higher if these key numbers are better than expectations. On the other hand, if they miss, the stock may move lower.

While management's discussion of business conditions on the earnings call will mostly determine the sustainability of the immediate price change and future earnings expectations, it's worth having a handicapping insight into the odds of a positive EPS surprise. This world's largest chipmaker is expected to post quarterly earnings of $0.90 per share in its upcoming report, which represents a year-over-year change of -40.8%. Revenues are expected to be $18.39 billion, down 7.9% from the year-ago quarter. The INTC stock down 1.58 (-2.95%) closed at 52.04 on Thursday. 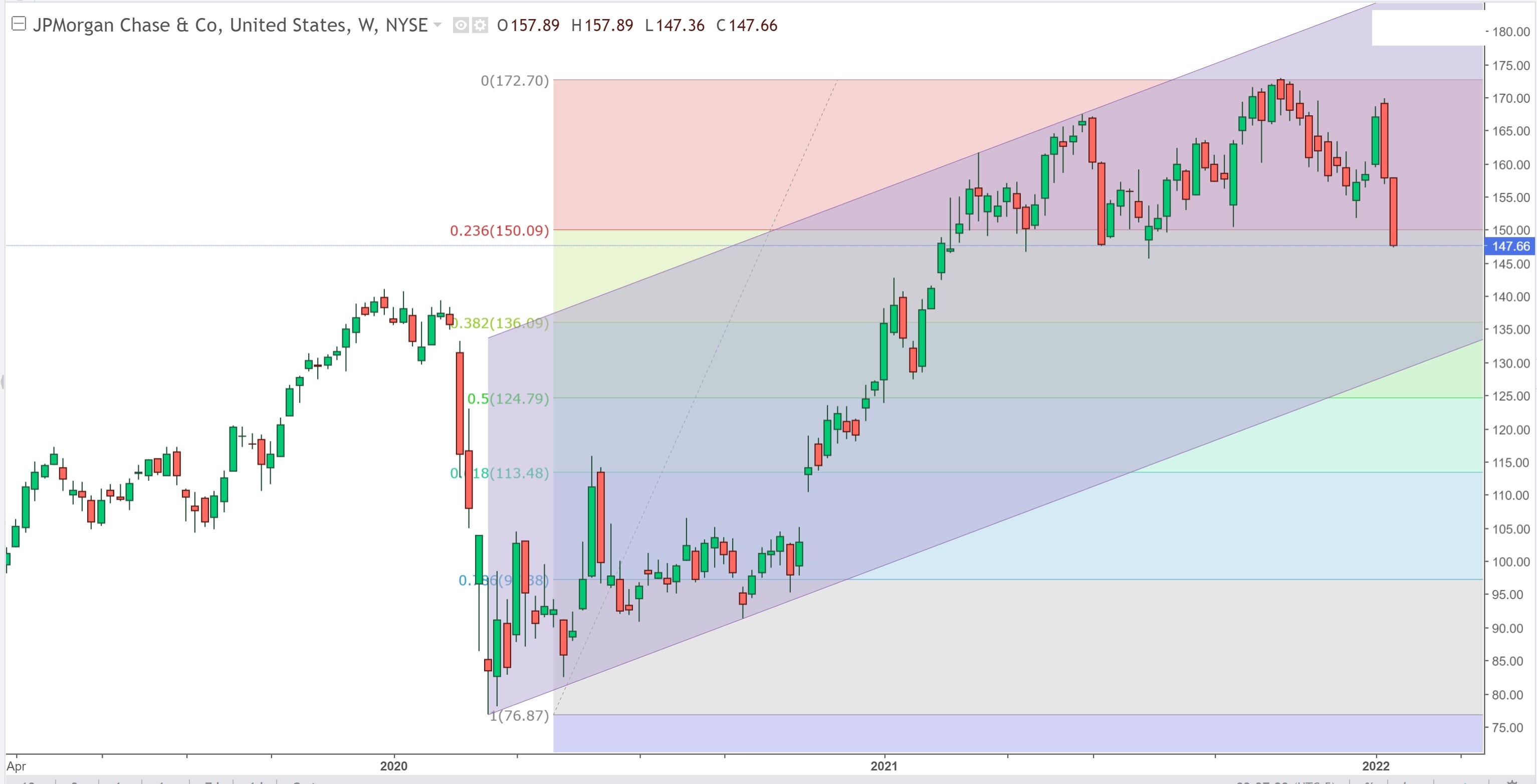 JPMorgan Chase (JPM) is in a base. But shares have fallen, after the bank reported mixed fourth-quarter results and analysts grew concerned about costs and longer-term profitability. The bank's earnings per share beat expectations. But revenue missed. A big increase in merger deals and a strong IPO market lifted investment banking. But markets revenue fell, after heightened trading activity in 2021. Rising costs — to attract and retain employees, open new branches and bolster its technology — also worried some analysts.

Management also said its return on tangible capital equity, another profitability gauge, could stay below its target of 17% for the next one to two years, as inflation persists, markets return to earth and other spending by the bank continues. That outlook came despite a still-strong economy. The Federal Reserve has taken a more aggressive stance toward raising interest rates and dialing back other pandemic-era economic support in an effort to tame rising prices. Bond yields and the yield curve have risen in the process. JPM stock down 1.27 (-0.85%) closed at 147.66 on last Thursday.

· Markit's French Flash PMI data for Jan is forecast at 55.1 versus 55.8 the previous month.

· The Markit Flash PMI for Germany in January is forecast at 53.4 versus 49.9 the previous month.

· Markit's European Flash PMI data for Jan is forecast at 52.6 versus 53.3 the previous month.

· The UK Markit/CIPS Composite Flash PMI data for Jan is forecast at 54 versus 53.6 the previous month.

· The US Markit Composite Flash PMI data for Jan is forecast at 56.7 versus 57 the previous month.

· The Bank of Canada Interest Rate Decision is expected to increase to 0.50% from 0.25% previously.

· The Bank of Canada will also provide a Monetary Policy Report.

· The Fed Interest Rate Decision is expected to keep the interest rate unchanged at 0.25%.

· Durable Goods Orders MoM US Dec forecast at 1.2% versus 2.5% in the previous month.