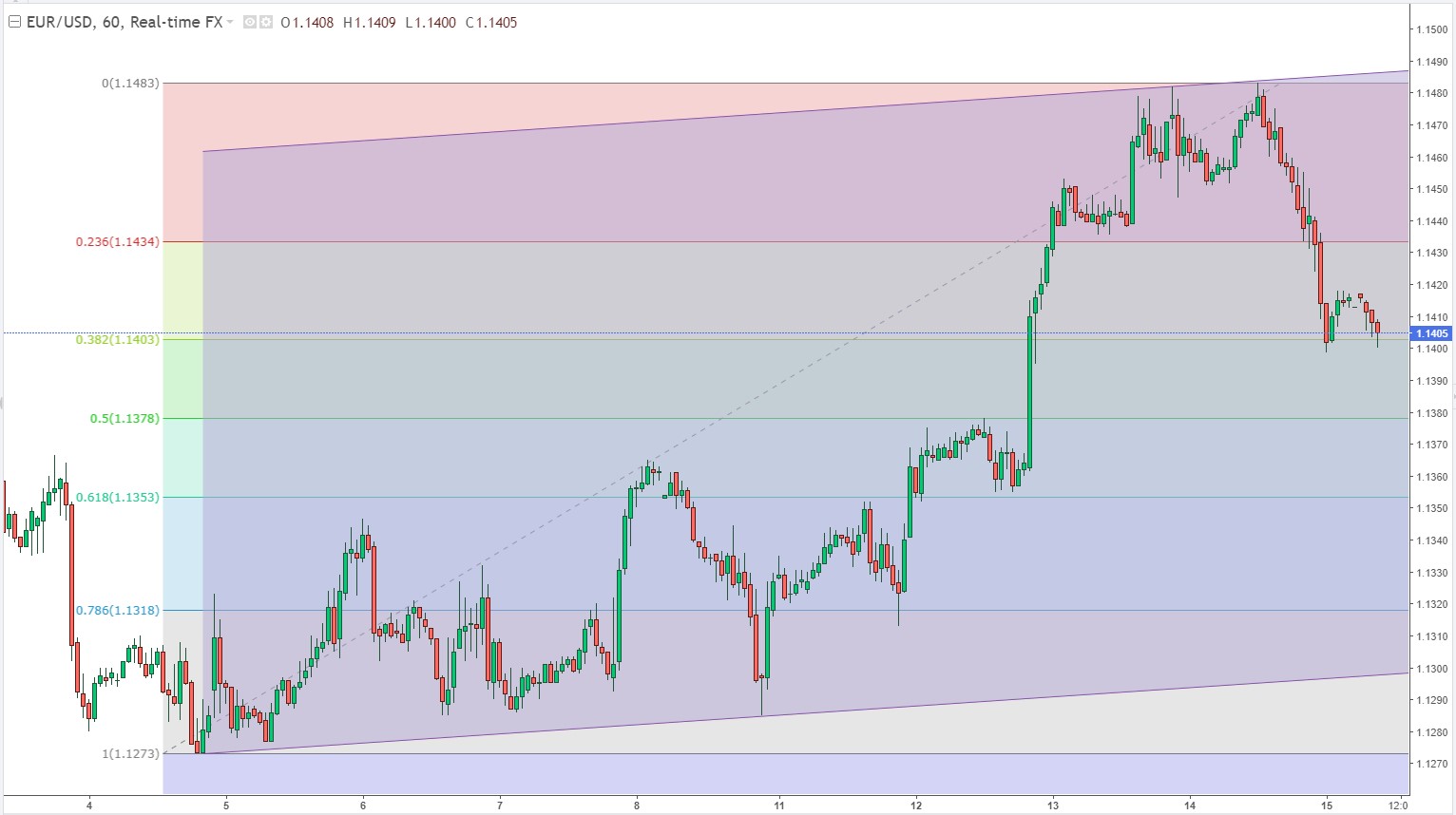 After EUR/USD selling has continued into the US trading session, though the bearish intra-day momentum has for the moment eased with the pair finding support above the psychologically important 1.1400 figure. At current levels around the 1.1410 mark, the pair is trading lower by about 0.4% and is over 0.6% lower versus its Asia Pacific session highs in the 1.1480. Technicians will be eyeing support in the 1.1380 area in the form of the late-November/December highs. Some EUR/USD bulls will be hoping that, after this week’s bullish breakout from the late-November/December ascending triangle, a retest of this key area of support might prove an excellent entry point to reload on longs and to target a move towards 1.1500. USD/JPY - 113.80 DLR remained on the back foot in hectic Asian trading on Fri, despite staging a recovery fm Thur's 3-week low at 114.01 (NY) to 114.22 in Australia, the pair came under renewed selling due to safe-haven yen buying on the back of intra-day weakness in Asian stocks following o/n decline in U.S. equities, price penetrated 114.01 to 113.75 ahead of Tokyo lunch break.

On Friday, USD/JPY is falling for the third consecutive day and for the sixth time out of the last seven trading days. The last intraday leg lower came in after the US Retail Sales report that showed an unexpected decline of 1.9% in December. A different report showed Industrial Production dropped 0.1% in December against expectations of a 0.4% increase. Also, Consumer Confidence data came in worst-than-expected. GBP/USD stays under modest bearish pressure in the American session and trades below 1.3700. The US Dollar Index is clinging to modest daily recovery gains near 95.00 despite weaker-than-forecast macroeconomic data releases from the US. GBP/USD has reached its highest level since late October at 1.3750 on Thursday but erased a large portion of its daily gains before closing flat near 1.3700. The pair is edging closer to 1.3750 early Friday and additional gains could be witnessed if this level turns into support.

The data published by the UK's Office for National Statistics revealed on Friday that the economic activity in November expanded by 0.9%, compared to the market expectation of 0.2%. On a negative note, Industrial Production increased by only 0.1% on a yearly basis, falling short of analysts' estimate of 0.5%. A broadly risk-off market tone that has seen global equity markets turn lower for a second day on Thursday seems to be taking its toll on the Aussie, as well as potentially some domestic Australian pandemic woes. The underperforming AUD has now dropped more than 0.6% on the day versus the US dollar, with AUD/USD recently dipped below 0.7250, as traders mull the economic impact of surging Omicron infections and whether it will have any bearing on upcoming RBA policy decisions.

This week’s Australia November Retail Sales report showed a much stronger than expected rebound as the Australian economy continued to open up from its Q3 lockdowns, solidifying expectations that, prior to the rapid spread of Omicron, Australia’s economy had been growing strongly.

Gold price is easing from fresh one-week highs of $1.829, as sellers continue to lurk around the $1.830 area. The pullback in gold price is mainly sponsored by a brief bounce in the US dollar across its main competitors, as bears take a breather ahead of the US Retail Sales release. The US dollar index is currently trading at 94.70, slightly off the two-month troughs of 94.60.

The bright metal witnessed a sharp corrective downside on Thursday, despite the persistent weakness in the Treasury yields and the dollar, as the March Fed rate hike seems a done deal. 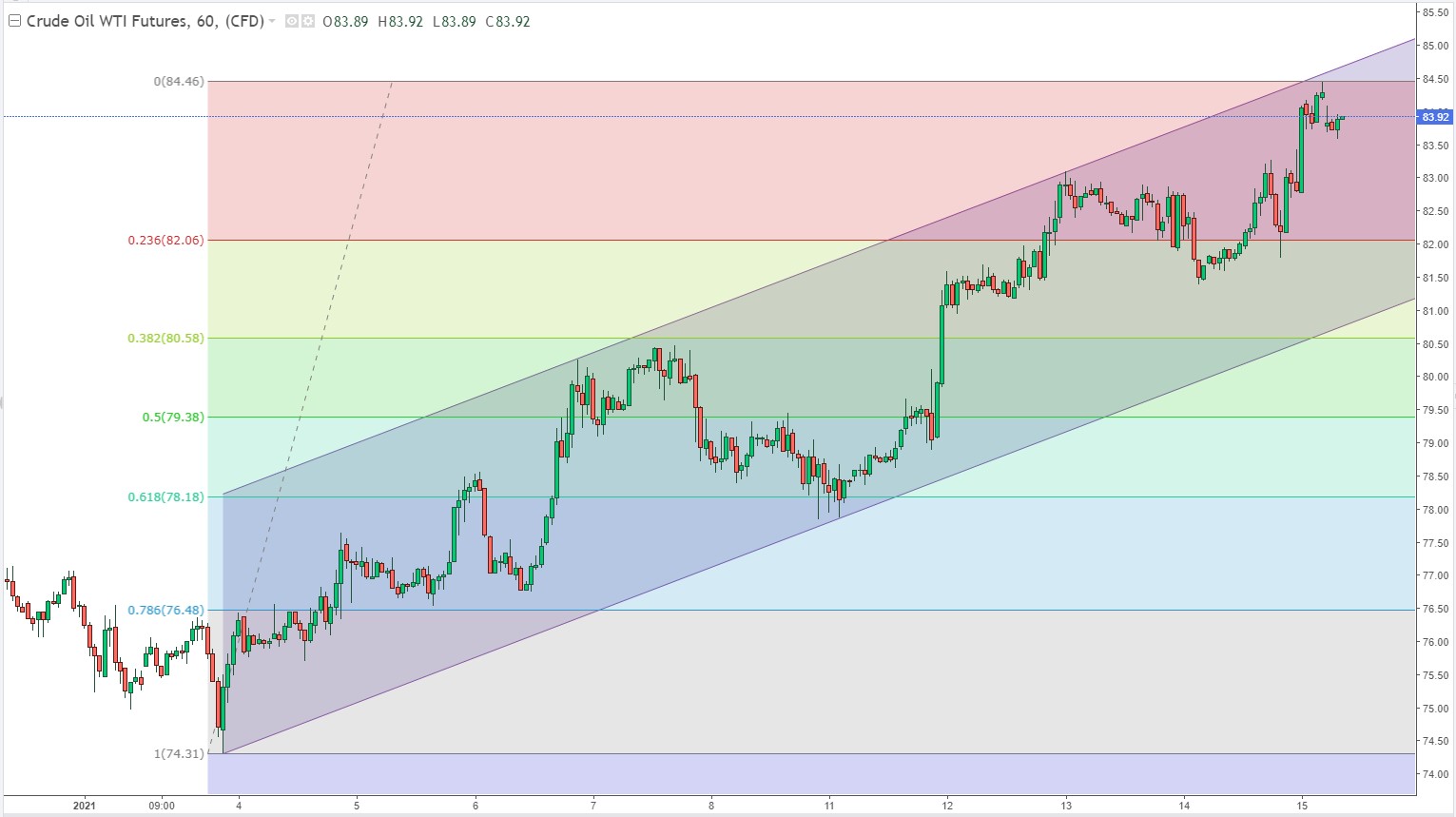 Oil markets have recovered from Thursday’s very mild stumble and are back on the front foot on Friday. Front-month WTI futures have in recent trade been probing highs of the week and its best levels since early November above $83.00 per barrel as crude oil bulls eye a breakout towards 2021 highs in the $85.50s. The impact of an outright Russian invasion on global oil supply isn't clear, but Russia is one of the world’s biggest producers, pumping more than 11M barrels per day (over 10% of daily global supply).

There appears to be a great deal of optimism amongst banks/analysts that WTI could be headed as high as $100 per barrel in 2022. Banks and analysts have generally been citing expectations for an increasingly tight market. JP Morgan said earlier in the week that oil prices could gain $30 from here after the US Energy Information Administration and Bloomberg earlier in the week lowered their OPEC output capacity estimates for 2022 by 0.8M and 1.2M barrels per day respectively. Wells Fargo & Co. reported tepid loan growth in the fourth quarter, but said borrowing is likely to pick up this year as clients start to take on debt again and government stimulus wanes. Net interest income, or the revenue the bank makes from loans minus what it pays depositors, may rise about 8% in 2022, the San-Francisco firm said Friday as it posted fourth-quarter earnings that beat analysts’ expectations. The bank also said expenses will decline 4.3% as Chief Executive Officer Charlie Scharf’s turnaround plan takes hold.

Wells Fargo shares rose 3.7% to $58.06 in regular New York trading. Lending has been a key focus for investors after demand lagged for much of 2021. That’s normally a bad sign for banks, but executives blamed consumers and businesses being flush with stimulus cash. Wells Fargo’s results provide a look at how the U.S.

Amazon experienced sharp revenue growth in the early days of the pandemic due to more people shopping online to avoid potential COVID exposure. But the explosive growth in Amazon’s sales, combined with a need to invest more in its delivery and logistics infrastructure has put a strain on the company’s net income. In Q3 2021, however, net income was just $3.2 billion. This drop came even though Amazon made more in sales in Q3 2021, $54.9 billion, than in 2020, $52.8 billion.