The euro sank on Thursday and lost most of its FOMC-induced gains, dragged down by broad-based U.S. dollar strength, higher U.S. yields, risk-off sentiment in the equity market, and growing concerns about the outlook for the European Union after March German factory orders tumbled more than expected. At noon, EUR/USD was 1% lower, trading at 1.0510 and steadily approaching its May’s low.
The sharp slowdown in Germany, raises the question of how quickly and forcefully the ECB can withdraw stimulus without strangling activity and pushing the regional economy into a deep recession. Over a medium-term horizon, monetary policy divergence between the ECB and the Fed and the fallout from the Ukrainian war may continue to weigh on the euro against the greenback. USD/JPY remains on the front foot around the weekly top surrounding 130.50 during Friday’s Asian session. The yen pair’s latest gains could be well linked to the market’s rush to risk safety and Japan’s return from holidays.
The pair attracted fresh buying on Thursday and has now rallied over 100 pips from the daily low, near the 128.75 zone. The uptick allowed spot prices to reverse a part of the previous day's post-FOMC slide to the weekly low and was sponsored by a combination of factors. A generally positive tone around the European equity markets undermined the safe-haven Japanese yen. The Euro managed to avoid the carnage as markets broke on Thursday and into Friday. Equities, bonds and commodities are all lower as the US Dollar soars higher. The British Pound got smashed after frank confessions from the Bank of England (BoE) said, “a recession is a nailed-on certainty.” The BoE also forecast inflation to hit 10% in this cycle.

Later in the day, Wall Street tanked after former Fed Vice Chair Richard Clarida said the Fed will have to tighten more than what Chair Powell said in the post FOMC press conference. Clarida said, “Expeditiously getting to neutral will not be enough.” He went on to further say, “The Fed funds rate will, I believe, ultimately need to be raised well into restrictive territory, by at least a percentage point above the estimated nominal neutral rate of 2.5%.” 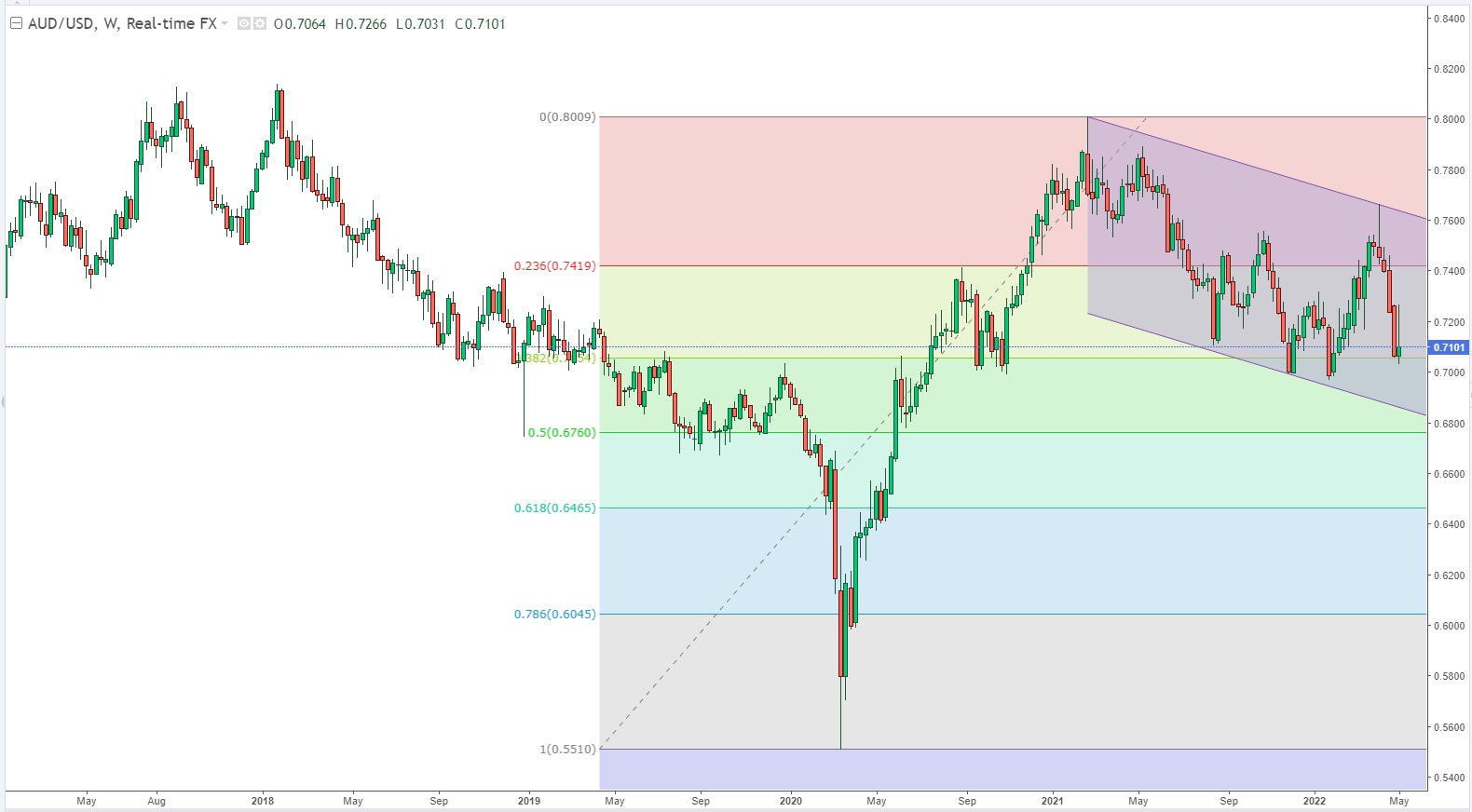 The RBA brought a hawkish surprise earlier this week, which helped to prod some life back into AUD/USD. And, as we had looked at on Tuesday, that fresh higher-high could be the start of another bullish wave provided that buyers could hold support. And given Wednesday’s USD pullback, that’s exactly what happened. Below, we are looking at the same two-hour price chart in AUD/USD that it had looked at a couple of days ago.

The higher-low support around 0.7082 has held and prices jumped all the way up to resistance at the psychological level at 0.7250. At this point, AUD/USD could be attractive for those that’d like to fade the USD theme of strength. This brings higher-low support potential to levels at 0.7148 and 0.7115. USD/CAD fails to extend the series of lower highs and lows from earlier this week as it retraces the decline following the Federal Reserve interest rate decision, but the opening range for May warns of a larger pullback in the exchange rate amid the failed attempt to test the 2021 high 1.2964.
USD/CAD bounces back from a fresh weekly low 1.2714 on the back of US Dollar strength, and it seems as though the recent shift in investor confidence is benefitting the Greenback as the US stock market comes under pressure. It remains to be seen if the Federal Open Market Committee (FOMC) insists that  additional 50 basis point increases should be on the table at the next couple of meetings. Gold spot (XAU/USD) is recording losses in the North American session, retreating from daily highs around 1.909.66. Amidst a risk-off market sentiment, as two-central banks expressed worries about China, while the Bank of England (BoE) foresees a GDP contraction on 2023 for the UK. At 1.878.51 XAU/USD is down 0.14% but below March’s 2022 lows at 1.890.

Gold remains neutral-downward biased, retracing the previous jump to weekly highs around 1,909,66 one day after The Fed’s decision. As of writing, XAU/USD price is below the 50 and the 100-day moving averages (DMAs), a sign of the yellow-metal weakness. Also, on its way north lies a solid resistance area around March’s lows, previous support-turned-resistance at 1890, which in the event of XAU/USD prices shooting higher, would be difficult to overcome on its way north. WTI crude oil has been settling down ever since the couple of weeks following Russia’s invasion of Ukraine, which is continuing to lead to range trading conditions. But this won’t last forever as the market will ultimately pick a direction to attempt to trade in. Crossing the 109.20 threshold on a daily closing basis is seen as getting oil moving back in the direction of the trend, with the next resistance level clocking in at 116.64. Beyond there we would be looking at the March spike-high at 130.50.

If WTI fails to trade higher and breaks the December trend-line, then watch how the April 25 low at 95.28 is handled. Just below there is a more meaningful low to watch, however, and that is at 92.93. A breakdown below that point would have oil heading towards the October high at 85.41 and the rising 200-day moving average currently at 83.62 and rising. China stocks fell on Friday, tracking a slump in global equity markets on inflation fears, after the country’s top leaders said they would stick with the dynamic “zero-COVID” policy, stoking worries of a further economic downturn. The CSI300 index fell 2.6% at the end of the morning session, while the Shanghai Composite Index declined 2.3%, The Hang Seng index dropped 3.6% , The Hong Kong China Enterprises Index fell 4.1%.
China will fight any comments and actions that distort, doubt or deny the country’s COVID-19 response policy, state television reported on Thursday, after a meeting of the country’s highest decision-making body. 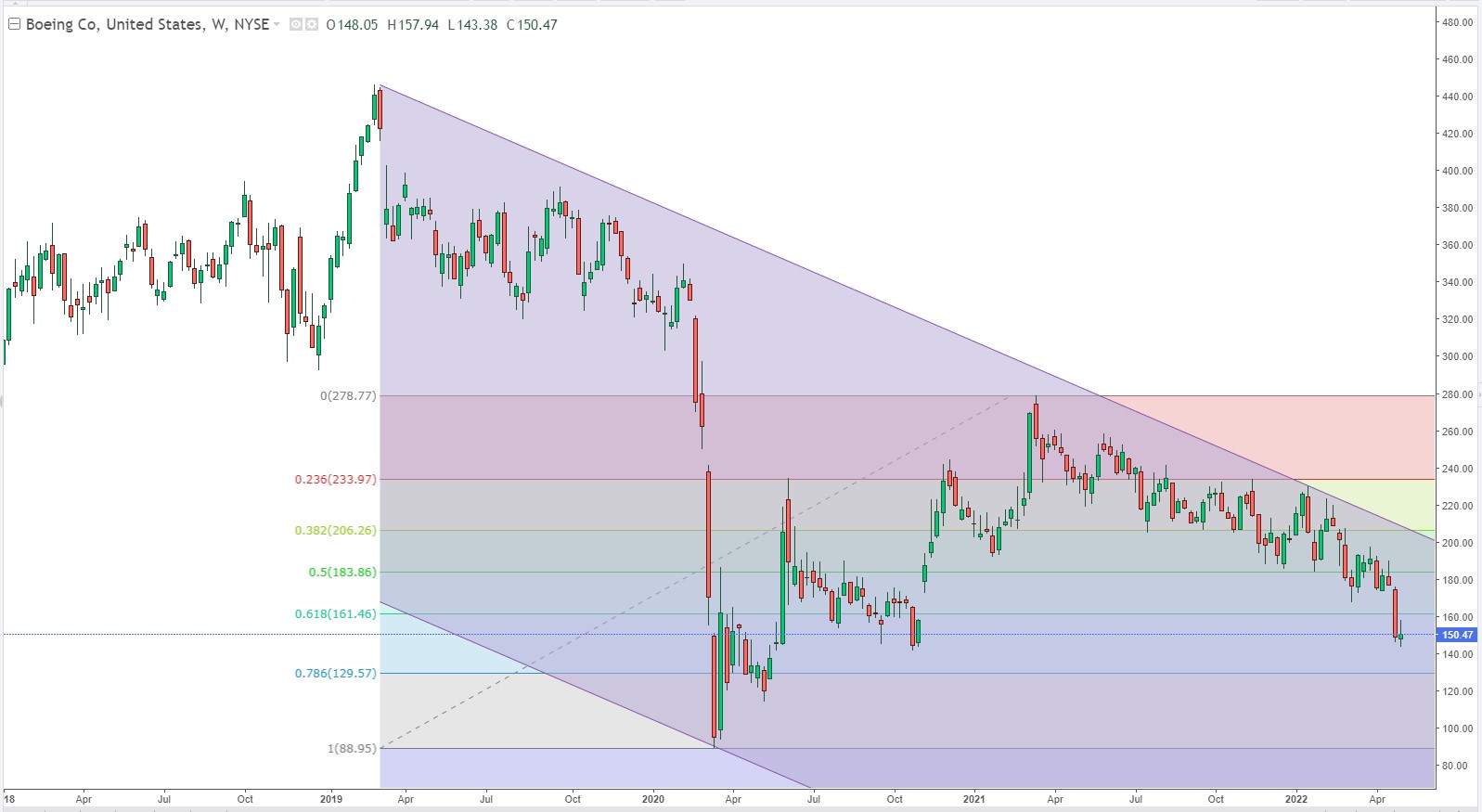 A major Boeing (NYSE: BA) customer is speaking out about the company's woes and the need for an overhaul of the aerospace giant. Investors are understandably alarmed, sending Boeing shares down nearly 5% on Thursday afternoon. Boeing has had a difficult run over the past few years.

The company's 737 MAX, at one point expected to be the best-selling commercial airplane of all time, spent 18 months grounded after a pair of fatal accidents. The investigation into what went wrong exposed a lot of embarrassing details about the company's culture, and led to safety regulators taking a fresh look at a range of Boeing planes. BA stock lower 6.50 (-4.14%) closed at 150.47 on last Thursday. Citibank, N.A. said today it has raised its base lending rate to 4.00% from 3.50%, effective on Thursday, May 5, 2022. Citi, the leading global bank, has approximately 200 million customer accounts and does business in more than 160 countries and jurisdictions. Citi provides consumers, corporations, governments and institutions with a broad range of financial products and services, including consumer banking and credit, corporate and investment banking, securities brokerage, transaction services, and wealth management.
Inflation is surging, Fed rate hikes are underway and some investors believe the odds of a recession are becoming increasingly likely. Investors looking to ride out the uncertainty and cushion their portfolios may find a good defensive play in these minimal volatility funds, Citi says. C stock lower 0.92 (-1.76%) closed at 51.31 on Thursday. 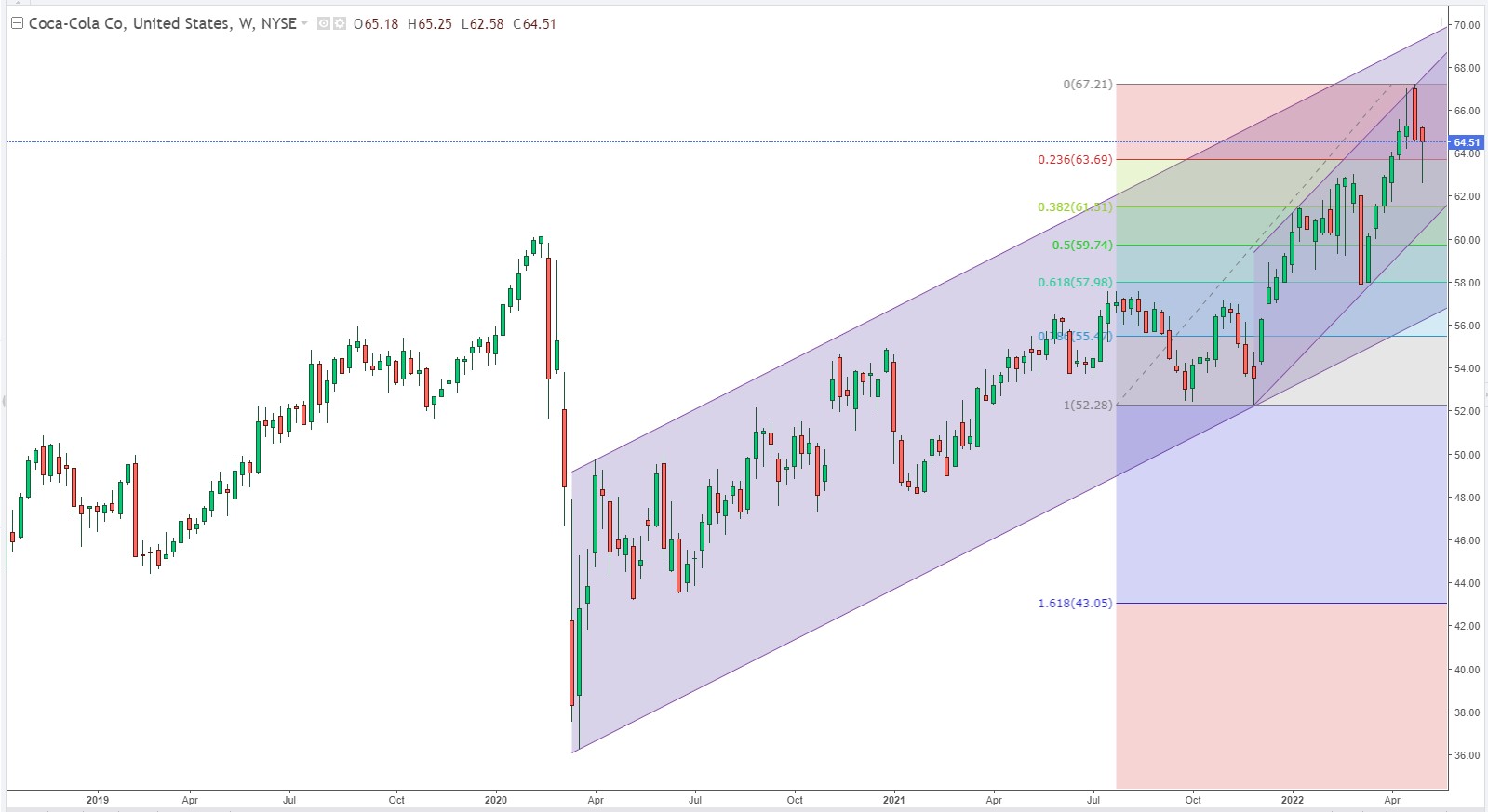 Coca-Cola's estimated $3 billion initial public offering (IPO) for its African bottling unit will likely take place in the third quarter after market turmoil linked to the war in Ukraine upset plans to list earlier, three sources said on Tuesday. The flotation of Coca-Cola Beverages Africa (CCBA) would be the biggest on the Johannesburg Stock Exchange since at least 2016 and a major boost for the flagging index.

But Moscow's invasion of Ukraine has shaken investor confidence and contributed to a plunge in volumes of IPOs in Europe, the Middle East and Africa as rising commodity prices and disrupted supply chains undermine growth and call valuations into question. KO stock  lower 0.52 (-0.80%) closed at 64.51 on Thursday. 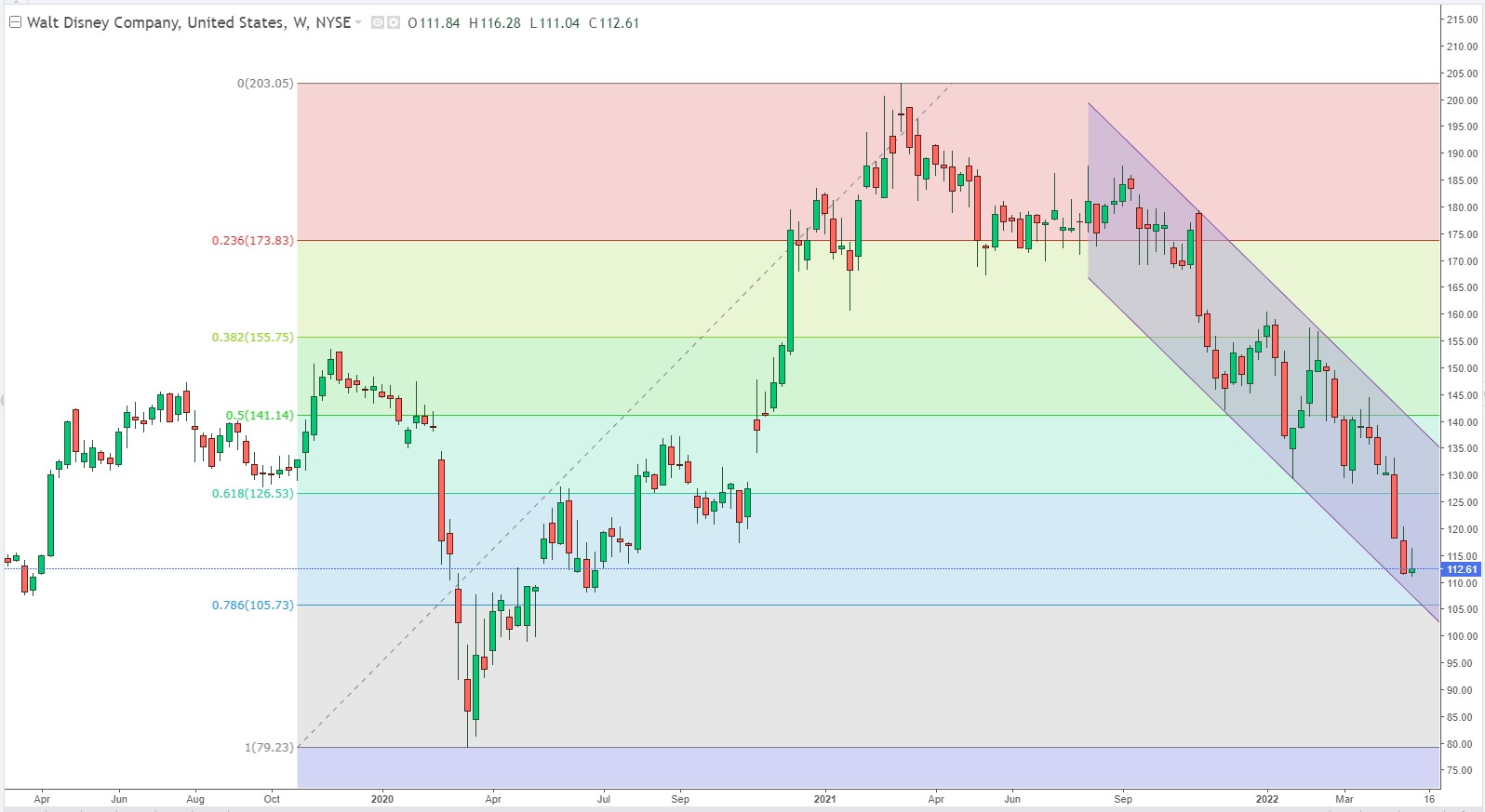 Disney (NYSE:DIS) stock is down 27% year-to-date (YTD). To say the least, the market is not pleased with its earnings, especially its negative free cash flow. DIS stock probably won’t turn around until Disney can produce positive free cash flow. The market will be watching closely on May 11 when its Q2 earnings come out.  Last quarter Disney produced poor results, at least from a cash flow standpoint. Despite the fact that revenue was up 34% year-over-year (YoY).
FCF is the amount of cash flow left over from CFFO after deducing capex spending. Both of these figures include net income, which was $1.15 billion. In other words, there was a huge cash outflow swing of $2.31 billion after SG&A costs. This outflow likely relates to huge spending on content by Disney.