The shared currency seesaws on Thursday North American session, courtesy of a positive market mood, while broad US dollar strength across the board helps the greenback to keep the EUR/USD pair confined to the 1.0960-1.1000 area. At press time, the EUR/USD is trading at 1.1000. Risk appetite improved in the New York session, as portrayed by US equities rising, contrarily to European bourses, which fluctuated.

The greenback has been supported throughout the day, as reflected by the US Dollar Index up 0.16%, at 98.766, underpinned by elevated US Treasury yields, with the 10-year benchmark note yield up to four basis points, sitting at 2.348%. A combination of supporting factors assisted the USD/JPY pair to build on this week's breakout momentum through the 120.00 psychological mark and scale higher for the fifth successive day on Thursday. A generally positive risk tone undermined the safe-haven Japanese yen, which was further weighed down by the divergence between the Bank of Japan and the Fed monetary policy outlooks.

In fact, a slew of influential FOMC members, including Fed Chair Jerome Powell, raised the possibility of a 50 bps rate hike at the upcoming policy meeting in May. This, along with concerns that surging crude oil prices would put upward pressure on the already high inflation, pushed the yield on the benchmark 10-year US government bond back closer to the highest level since 2019. The GBP/USD pair slides for the second consecutive day on Thursday and drops below the 1.3200 mark amid a risk-on market mood, which usually favored the British pound, but US central bank hawkishness and broad US dollar strength weighed on the pair. At the time of writing, the GBP/USD is trading at 1.3173. As abovementioned, the market sentiment turned sour of late. European indices closed Thursday session with losses, though US stocks keep in the green.

In the FX space, the greenback stays firm around 98.89 per the US Dollar Index, approaching the 99.00 mark, while US Treasury yields rise. Early in the North American session, Minnesota Fed President Neil Kashkari expressed that the risk of overdoing it on rate hikes exists. Furthermore, he added that he sees neutral rates at around 2%. The AUD/USD edges higher, but the rally appears to be stalling, as shown by Thursday’s price action, about to form a doji candle, meaning the tug-of-war between bulls and bears started, as uncertainty looms. At the time of writing, the AUD/USD is trading at 0.7510. The market mood is risk-on in the North American session, despite that European stocks indices finished with losses.

Across the pond, US equities are rising, while the buck shows some resilience to fall, as it trades with gains reflected by the US Dollar Index up 0.20%, at 98.82. US Treasury yields resume their advance after Wednesday’s losses, with the 10-year T-note yield up almost five basis points, sitting at 2.341%. An absent Australian economic docket would leave AUD/USD traders adrift to US data on Friday. 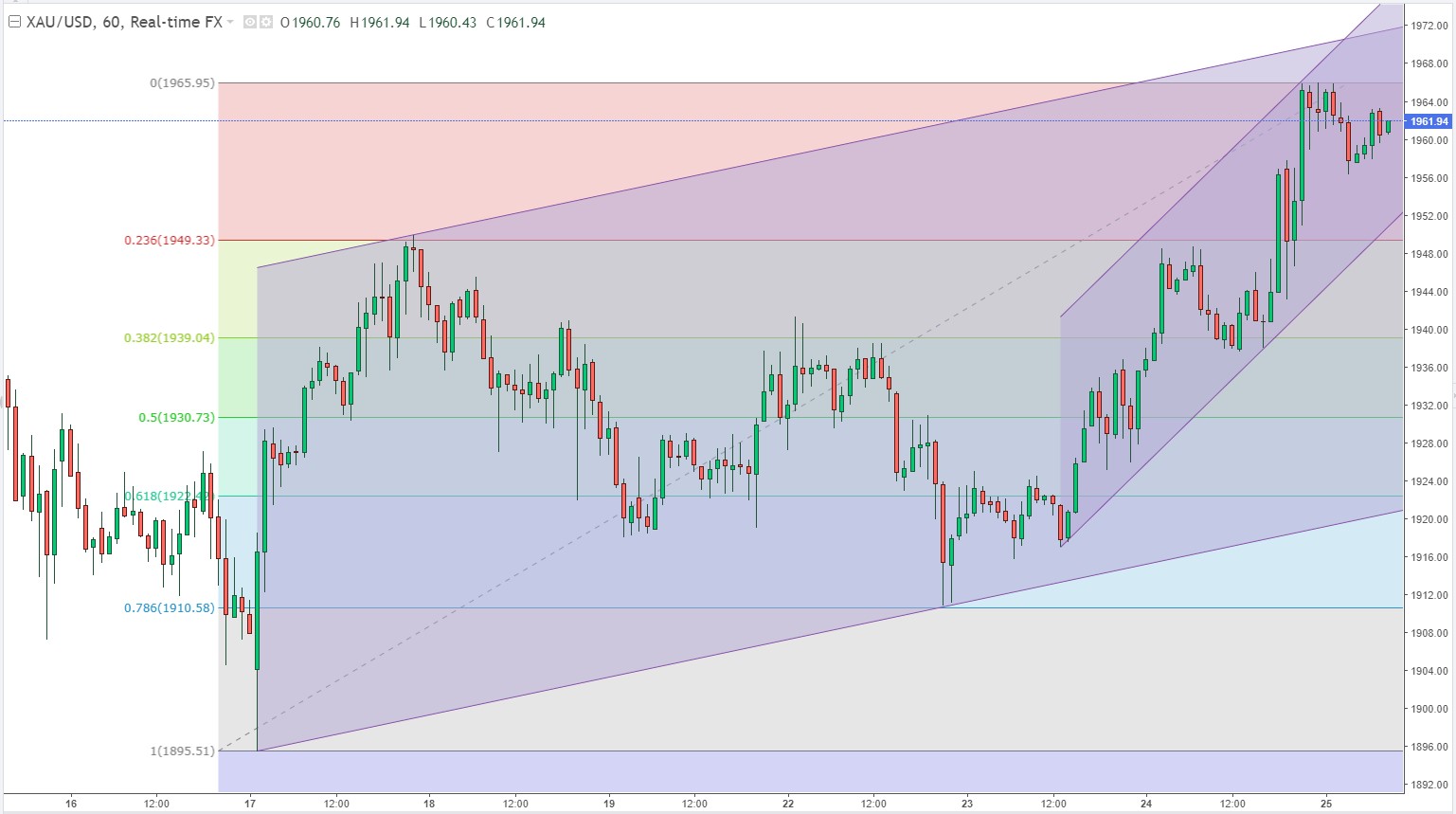 Gold (XAU/USD) has extended its gains after overstepping the round level resistance of $1.950.00 as investors have underpinned the precious metal on a hawkish stance of US President Joe Biden in NATO meeting on Thursday. Also, the market participants parked their funds in precious metal counter on inflationary pressures.

Uncertainty surrounding the Ukraine crisis escalated on Thursday when Russia’s invasion of Ukraine completed its first month. The aggressive approach adopted by the Western leaders in Brussels to establish four new battle groups in Slovakia, Romania, Bulgaria, and Hungary, which may strengthen their collective defense, particularly on the Eastern flank looks to hold their grip on Russia. This has escalated geopolitical tensions and has underpinned gold prices further. Oil markets have seen volatile trade thus far this Thursday, with traders juggling a multitude of themes. WTI swung between multi-week highs in the upper $116 and the $112 area, and at current levels around $113 trades about a buck lower on the session. Dips toward $110 attracted solid demand as energy market participants continue to weigh up the size of the loss of Russian oil supply. Executive Director of the IEA Fatih Birol said on Thursday that IEA countries were united in seeking to radically reduce Russian oil and gas imports, with Western nations have imposed harsh sanctions on the Russian economy over its invasion of Ukraine. On which note, Thursday saw a flurry of NATO and EU summits where those sanctions were marginally toughened, though there was no EU announcement of an EU embargo on Russian oil. McDonald's Corporation MCD is focused on international expansion, loyalty program and digitalization to drive performance. The company is benefiting from robust comps growth. In the past year, the company’s shares have gained 8.5%, against the industry’s decline of 7.2%. However, high debt and dismal China comps hurt the company.