The EUR/USD pair holds above the 50% retracement of the 1.1691/1.1185 decline at 1.1437, an immediate support level, while the 61.8% retracement provides resistance at 1.1495. In the daily chart, the pair remains below a mildly bearish 100 SMA, which stands a few pips above the mentioned Fibonacci resistance, while the 20 SMA slowly grinds higher below the current level. Technical indicators remain near overbought readings, partially losing their strength but still heading higher. The USD/JPY pair continued losing ground through the early North American session and dropped to a fresh three-week low, around the 114.20 region in the last hour.

The latest US CPI report released on Wednesday was not deemed worrying enough to change the Fed's already hawkish outlook and forced investors to unwind their US dollar bullish positions. The USD selling bias remained unabated on Thursday, which, in turn, was seen as a key factor that dragged the USD/JPY pair lower for the second successive day. This also marked the sixth day of a negative move for the USD/JPY pair in the previous seven sessions, summing up to a fall of over 200 pips from a five-year high touched on January 4. At 1.3729, GBP/USD is higher on the day so far, trading up 0.16% after climbing from a low of 1.3705. The price is stalling here but the US dollar has been on the backfoot and the pound is lapping it up. The GBP has found some support on the back of the BoE’s 15 bps rate rise last month and on market expectations of further tightening this year.

Meanwhile, the US dollar has been pressured due to some of the less hawkish comments of late, including both the Federal Reserve chair, Jerome Powell, and Philly Fed President Patrick Harker. AUD/USD has in recent hours moved back to the north of the significant 0.7300 level and looks to be on course to mount a retest of an uptrend that has been capping the price action going all the way back to the end of November in the 0.7320s area. For now, at current levels in the 0.7310s, the pair is trading with gains of about 0.4% on the session, as dollar weakness provides ongoing tailwinds.

The US inflation and employment stories received further input on Thursday in the form of Producer Price Inflation, which showed Core prices growth at a fresh record high (the data series started in 2011) above 8.0% YoY. The latest weekly jobless claims report, meanwhile, was mixed with a much larger than anticipated drop in continued claims and a fall in the insured unemployment rate from 1.3% to 1.1%, but a slightly larger than expected 230K initial claims on the week. The latter is perhaps indicative of the Omicron variant slowing the labour market, though is still in healthy pre-pandemic ranges (typically 200K – 250K).

During the North American session, the US dollar sell-off continued after US consumer inflation data released on Wednesday showed that CPI rose by 7.0%. USD/CAD slides to fresh YTD lows, trading at 1.2461, a level last seen in November of the last year.

US Department of Labour reported that Initial Jobless Claims for the week ending on January 7 increased by 230K, more than the 200K. At the same time, prices paid by producers, better known as the Producer Price Index for December on an annual basis, rose by 9.7%, a tenth lower than expected, showing that price pressures might get under control. Earlier, the Philadelphia Fed President Patrick Harker said that he expected three rate hikes, followed by a reduction of its $8.7 Trillion balance sheet, coinciding with Fed’s Bostic, Mester, Daily, and other policymakers have said in the week. Gold, (XAU/USD), has been under pressure on Thursday and despite the sell-off in the US dollar which has marked a fresh low to 94.660 as per DXY. At the time of writing, gold is trading at $1,820.33 and is down some 0.32% after sliding from a high of $1,828.18 to a low of $1,812.42.  The price of the US dollar has been undermined by some less hawkish comments of late, including both the Federal Reserve chair, Jerome Powell, and Philly Fed President Patrick Harker. WTI crude oil buyers take a breather after a two-day uptrend near the highest level since early November. That said, the US oil benchmark drops 0.25% intraday while taking rounds to $81.90 of late. Overbought RSI conditions triggered the WTI pullback from a multi-day high. However, the commodity’s further weakness remains doubtful until its stays beyond the $79.50 support confluence, comprising ascending trend line from December 21 and 23.6% Fibonacci retracement of August-October 2021 upside.

In a case where WTI drops below $79.50, January 10 swing low near $78.00 should return to the chart. Though, a convergence of the previous resistance line from October, a six-week-old upward sloping trend line and 38.2% Fibo level, near $76.15, becomes a tough nut to crack for the bears. Meanwhile, the quote’s further upside will wait for the fresh multi-day high, currently around $82.50, before challenging a three-month-long horizontal area near $83.50-84.00. Stocks in Japan and South Korea led losses in major Asia-Pacific markets on Friday as the recent rally in U.S. stocks broke momentum with the Nasdaq snapping a three-day winning streak. Japan’s Nikkei 225 fell 1.28% to close at 28,124.28. Wall Street will be looking for positivity from Cisco Systems as it approaches its next earnings report date. The company is expected to report EPS of $0.81, up 2.53% from the prior-year quarter. Meanwhile, our latest consensus estimate is calling for revenue of $12.65 billion, up 5.77% from the prior-year quarter. CSCO's full-year Zacks Consensus Estimates are calling for earnings of $3.42 per share and revenue of $52.67 billion. These results would represent year-over-year changes of +6.21% and +5.72%, respectively. On last Thursday closed at 61.50, -0.62 (-1.00%) Coca-Cola (KO) closed the most recent trading day at $60.90, moving +0.59% from the previous trading session. Coming into today, shares of the world's largest beverage maker had gained 4.27% in the past month.

Wall Street will be looking for positivity from Coca-Cola as it approaches its next earnings report date. On that day, Coca-Cola is projected to report earnings of $0.40 per share, which would represent a year-over-year decline of 14.89%. Meanwhile, our latest consensus estimate is calling for revenue of $8.94 billion, up 3.77% from the prior-year quarter. EBAY is slated to release earnings on Tuesday, Feb. 1, with Wall Street analysts projecting that the ecommerce giant will report earnings $1.00. Moreover, eBay’s fundamentals offer investors a mixed bag. eBay stock has a decent forward price-earnings ratio of 15.11, but EBAY currently trades at an elevated price-sales ratio of 3.92, seemingly indicating that the ecommerce company’s biggest issue is its top line. EBAY also holds a relatively good balance sheet with $14.56 billion in cash and $9.31 billion in total debt, making eBay stock a decent option for value investors. 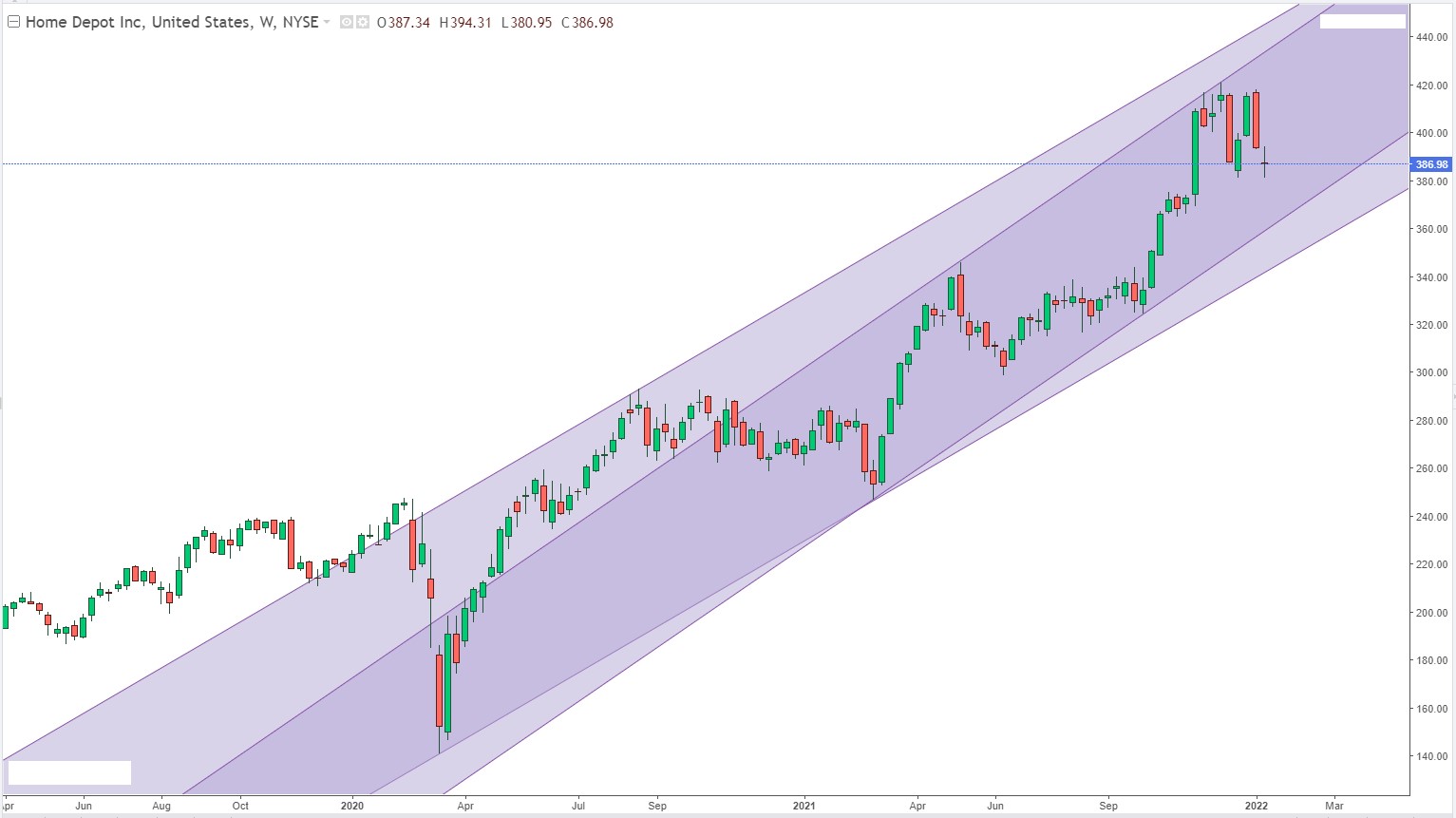 Home Depot (HD) closed the most recent trading day at $389.40, moving +0.71% from the previous trading session. Prior to today's trading, shares of the home-improvement retailer had lost 3.86% over the past month.

Investors will be hoping for strength from Home Depot as it approaches its next earnings release, which is expected to be February 22, 2022. The company is expected to report EPS of $3.22, up 17.52% from the prior-year quarter. Meanwhile, our latest consensus estimate is calling for revenue of $34.68 billion, up 7.49% from the prior-year quarter. For the full year, our Zacks Consensus Estimates are projecting earnings of $15.49 per share and revenue of $150.08 billion, which would represent changes of +28.76% and +13.6%, respectively, from the prior year.

• The Bank of Japan will announce the interest rate which is expected to remain unchanged at -0.1%.

• UK Dec Claimant Count data is expected to come in at -36K versus -49.8K previously.

• The US NY Empire State Mfg Index data is forecast for 28 versus 31.9 previously.

• UK YoY Dec Inflation Rate data is expected to increase to 5.4% compared to the previous 5.1%.

• Canada's YoY Dec Inflation Rate data is expected to increase to 4.8% compared to the previous 4.7%.

• There are some data from the US:

- Bank of England Governor Andrew Bailey is scheduled to give a speech.

• Australia's Dec Unemployment Rate data is estimated at 4.6% the same as the previous month.

• There are several US data to be published:

• UK Gfk Consumer Confidence data is expected to come in at -18 compared to -15 previously.