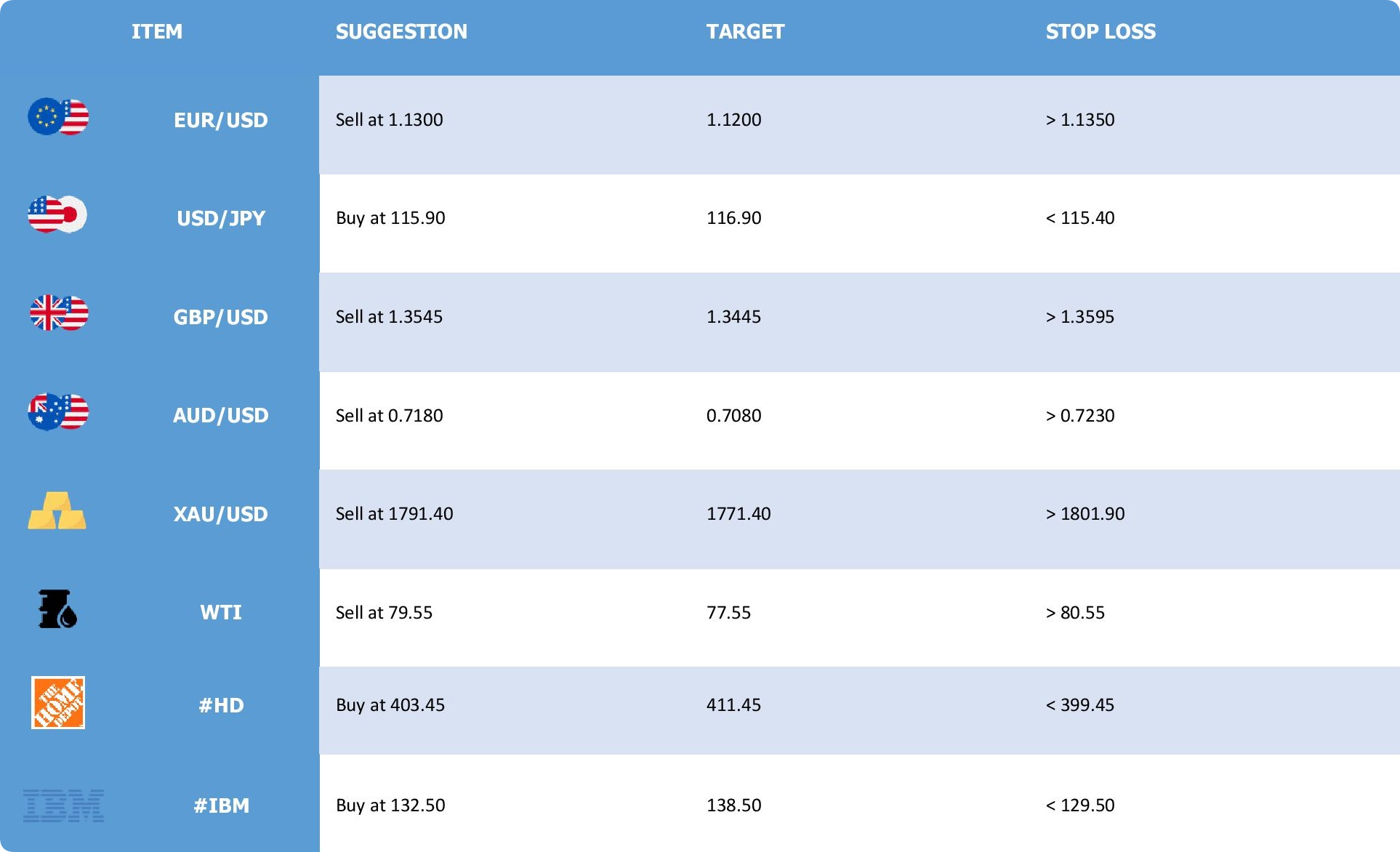 On Thursday, the shared currency is barely flat during the day, though it trims some Wednesday gains, as market participants assess last FOMC’s meeting minutes. The EUR/USD is trading at 1.1295 at press time. The Institute for Supply Management reported that the Services PMI in the US fell from 69.1 in November to 62.0 in December.

Before Wall Street opened, the Department of Labor reported that Initial Jobless Claims for the week ending on January 1, 2022, increased by 207K higher than the 197K foreseen by economists. The 4-week average topped 204.5K, more than the 199.75K in the prior week. Moving back above the 116.00 level on Wednesday, but failing to test Tuesday’s multi-year high at 116.40, USD/JPY has gradually slipped lower on Thursday and has spent the last few hours going sideways in the 115.70s area. The pair, which has thus far failed to garner any impetus in wake of a more hawkish than expected Fed minutes release on Wednesday despite it sending US yields sharply higher across the curve, has found support in the form of Wednesday’s low close to 115.60. Below that, technicians note further support in the form of the November 2021 and February 2017 highs at 115.50.

However, with the yen the most sensitive G10 currency to rate differentials, long-term US yields will likely need to resume their march higher if USD/JPY is to surpass recent highs and test late-2016 highs above 118.00. The US 10-year poked above 1.70% on Thursday and is up over 20bps on the week, but the key level being watched by bond market participants is the 2021 high at 1.77%. Following GBP/USD has reversed its direction after rising to its highest level in nearly two months at 1.3600 late Wednesday as the dollar's market valuation continues to impact the pair's action. Although the pound seems to have steadied around 1.3500 in the early European session, additional losses could be witnessed in case it drops below 1.3480.

The minutes of the FOMC's December meeting minutes revealed that policymakers saw it appropriate for the Fed to start the balance sheet normalization process soon after the first rate hike. The publication showed that participants see the current economic conditions warranting a faster pace of balance sheet runoff compared to the previous normalization episode.

Around 0.7160, AUD/USD ended the day down some 0.80% on Thursday after falling from a high of 0.7222 to a low of 0.7145 in a technical move that has pierced important daily trendline support. The hawkishness at the Federal Reserve is driving sentiment and has resulted in an offer in the Aussie, to the contrary to the usual bullish seasonal factor.

Over several years, the start of the year has been typically bullish for the commodity sector and high beta currencies, such as the Aussie. However, the caveat for the seasonal bullishness was always going to be how hawkish the Fed comminuted at the start of the year. That came sooner than the market had expected in Wednesday's Federal Open Market Committee minutes. 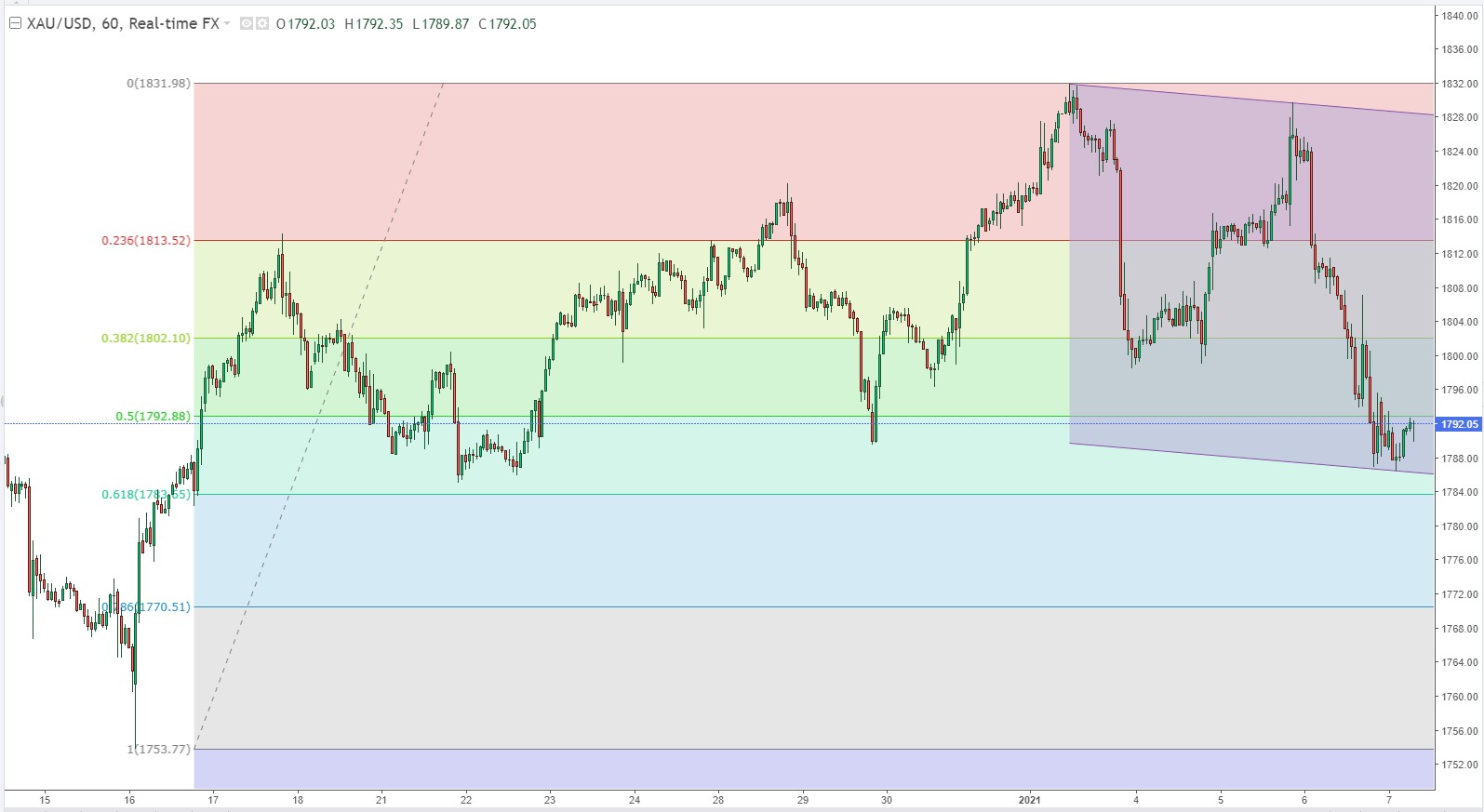 Gold, XAU/USD is headed towards the end of the North American session lower by some 1.15%. It's been a poor week for gold price so far and they are n the verge of a bearish close for the start of January. A break of $1.780 opens the risk to the $1.750s for the forthcoming weeks. Fundamentally, Gold is tumbling as markets attempt to squeeze in a fourth hike for 2022 in response to yesterday's Federal Open Market Committee minutes. There was a knee-jerk rally but the dollar ran into offers on Thursday in what was choppy aftermath in markets while US equities attempted to correct the prior session's sell-off. Oil Front-month WTI futures have surged on Thursday despite recent hawkish The Fed minutes induced downside in other risk assets which oil tends to have a tight correlation to such as US and global equities. Prices momentarily eclipsed $80 per barrel for the first time since mid-November before easing back a little and at current levels in the mid $79.00s, WTI is trading with gains of about $2.50 on the day. With the last key area of chart resistance in the $79.50 area ahead 2021 highs around $85.00 now cleared, oil bulls may now be expecting WTI to push more decisively into the $80s. The trading price of The Home Depot Inc. (NYSE:HD) floating lower at last check on Wednesday, January 05, closing at $409.49, -0.81% lower than its previous close. Traders who pay close attention to intraday price movement should know that it has been fluctuating between $408.19 and $413.61. The Home Depot Inc., whose market valuation is $425.84 billion at the time of this writing, is expected to release its quarterly earnings report Feb 21, 2022 – Feb 25, 2022. The dividend yield on the company stock is 1.60%, while its Forward Dividend ratio is 6.60. Investors’ optimism about the company’s current quarter earnings report is understandable. Analysts have predicted the quarterly earnings per share to grow by $3.33 per share this quarter, however they have predicted annual earnings per share of $14.57 for 2022 and $15.25 for 2023. International Business Machines (NYSE: IBM) stock gained 14.1% in December, according to data from S&P Global Market Intelligence. Credit Suisse analyst Sami Badri published a note on IBM stock on Dec. 7, giving the company's shares an overweight rating and maintaining a one-year price target of $164.29 per share. At the time of the note's publication, this suggested upside of roughly 37%, and it looks like Badri's bullish coverage helped generate some momentum for the stock.

IBM stock has continued to climb early in January's trading. The company's share price is up roughly 3.3% in the month so far. The company now has a market capitalization of roughly $124 billion and trades at about 13.5 times this year's expected sales. IBM also pays a dividend yielding 4.7%.