EUR/USD started the year near the 1.2300 level but later found itself under strong pressure and declined towards 1.1200 before rebounding to 1.1300. The key driver for this move was the difference between Fed and ECB views on rates and inflation. While the Fed has already began to aggressively reduce its QE program and looks ready to raise rates several times in 2022, ECB remains dovish.

The outlook for the central bank policy will likely remain the key driver for EUR/USD in 2022. The rebound of the American economy was stronger than the rebound of the European economy, which put additional upward pressure on prices in the U.S. The key question for traders is the number of rate hikes from the Fed in the next year. 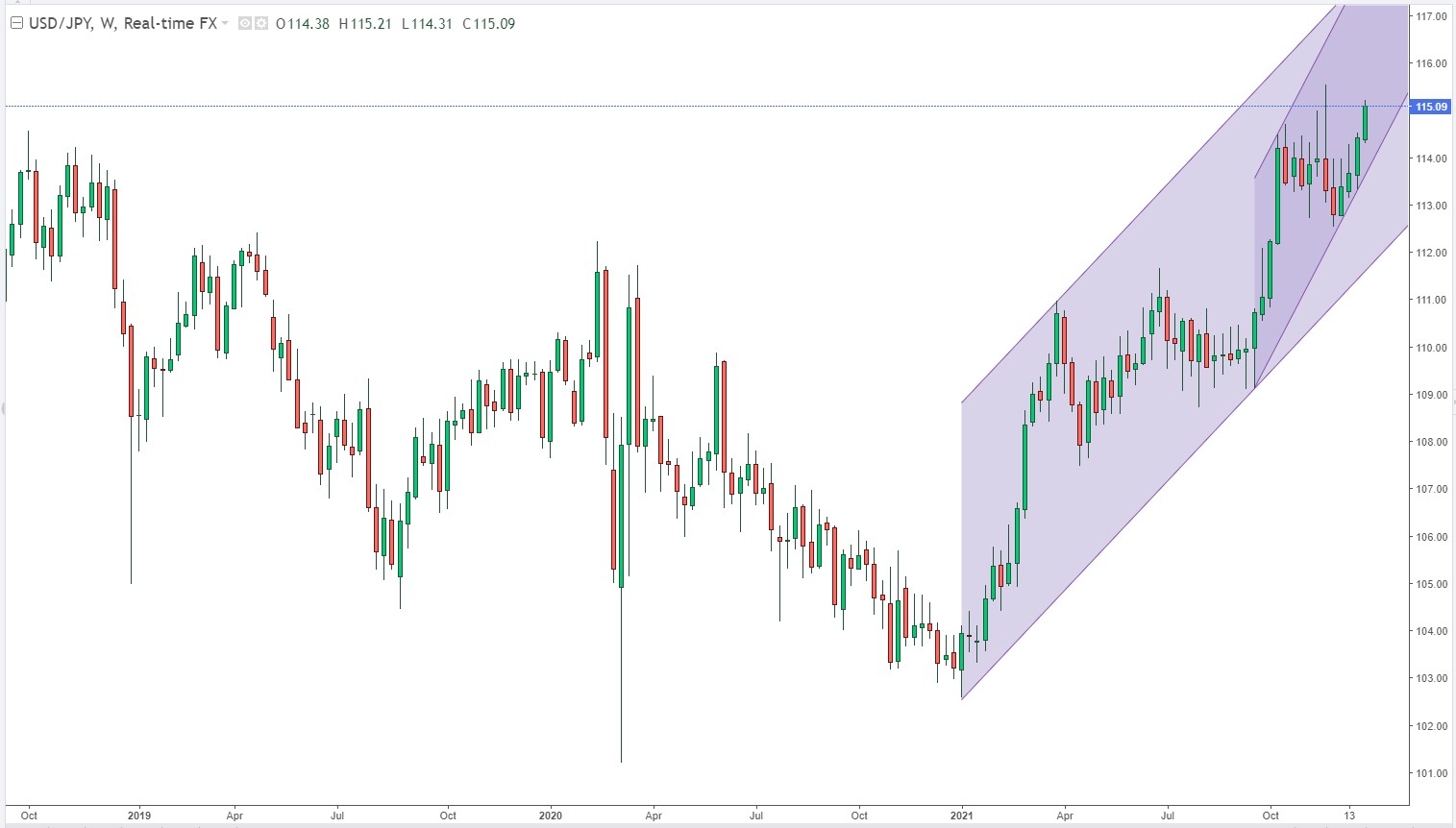 The US dollar has rallied a bit during the course of the trading session on Thursday to break above the psychologically important ¥115 level. For USD/JPY, the road ahead in the first quarter of 2022 will likely remain heavily glued to market expectations of how hawkish the Federal Reserve. In December, the central bank doubled the pace of tapering asset purchases, which will now see it end in early 2022.

Headline price growth is at its fastest pace in almost 40 years in the United States. Expectations are that price growth will remain above the central bank’s target next year, with Core PCE running around 2.7% in 2022. The UK kicked off 2021 with an advantage. It secured more vaccines than its peers in the West, and its population seemed enthusiastic to get jabbed. That advantage was closed by Britain’s peers, and in 2022, most of the world will have access to immunization.

While the disease is global, other issues like Brexit, monetary policy, and fiscal moves are local. The bullishness of the Bank of England could prove temporary and backfire, while other matters may leave the monarchy behind. Looking into 2022, AUD/USD appears to be at the whim of Australia/US interest rate differentials and the US Dollar, while commodities seem to be out of the picture for now. The RBA has remained comparatively dovish at a time when central banks around the globe are looking to tighten monetary policy aggressively. A robust Australian economy could be the factor to tilt the RBA into action and unwind pandemic stimulus.

Headline CPI is at the cusp of the upper bound of their target range of 2 - 3%, while their preferred measure of trimmed mean inflation, is at the lower bound. Their next meeting is early February, by that stage, officials will have fourth quarter CPI to take into account. With many Australian states re-opening in the fourth quarter, it is possible to see an up-tick in prices. This could force the RBA’s hand and some hawkishness might be seen. The Australian Dollar may continue to languish until the RBA changes its tune. 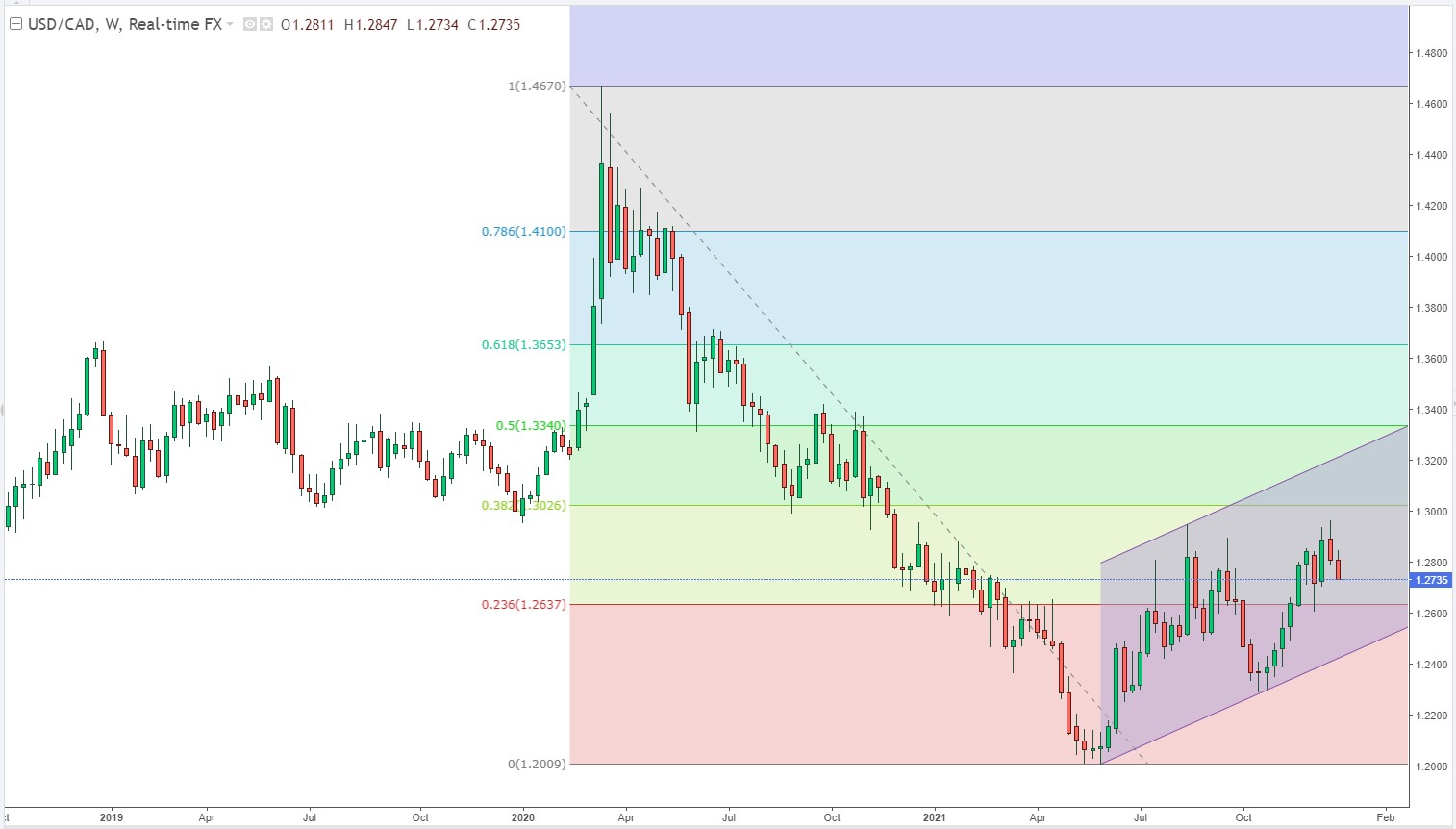 USD/CAD The Canadian dollar weakened 0.3% to just below 1.28 in 2021, despite the volatility, the Loonie outperformed key currencies such as the Euro, Pound, Yen and the Swiss Franc amid a strong economic rebound.

Strength in energy markets is helping propel the Canadian Dollar higher at the end of the year. Energy, which accounts for approximately 11% of Canadian GDP, has a considerable sway over the Loonie, so it’s no surprise that the sharp rebound by crude oil prices over the past week have filtered into rallies by the major CAD-crosses. Amid thin-year end liquidity conditions, gold price continues to trade choppy within familiar levels, largely pivoting around the $1.800 mark. The downbeat sentiment around gold price could be attributed to a broad-based US dollar rebound, aided by the recent strength in the Treasury yields. The 10-year rates have recaptured the 1.50% key level, which warrants caution for gold bulls. Going forward the year-end repositioning in the greenback will continue to have a significant impact on gold while thin conditions could exaggerate the moves.

Gold price is retreating from near monthly highs of $1.820, having jumped on Thursday in a typical choppy year-end trading, Gold price almost tested December highs but failed to break through it, as bulls remain cautious heading into the yearly close. The bright metal remains on track to record its worst performance in six years, as the US dollar holds the higher ground amid expectations of aggressive Fed tightening next year. Not only did oil prices rebound, they're higher now than prior to the pandemic. When oil prices crashed last year, producers had no choice but to cut production. That reduced supply was quickly outmatched as the historic economic recovery saw demand roar back sooner—and stronger—than expected. As of Friday, that WTI contract price stands at $69.62 per barrel—up 52% from December 2020. That has also translated into higher prices at the pump. The average U.S. regular price of $3.34 per gallon is up 55% since December 2020.

When it comes to domestically produced crude, Barclays predicts that the WTI contract price will increase from the current rate of $69.62 to an average price of $77 in 2022. The bank says the Biden administration's recent release of oil from the Strategic Petroleum Reserve isn't a sustainable way to bring down prices, and the dip we've seen in recent weeks "would only be temporary." Prices could go even higher than forecast, the bank says, if COVID-19 outbreaks are minimized and thus allow demand to grow by more than expected. Simply put: If the pandemic winds down next year, that could put more upward pressure on prices. Japanese stocks navigated an extremely volatile and eventful year, characterized by the full lifting of a nearly 6-month long state of emergency which paved the way for a faster economic recovery, the election of prime minister Fumio Kishida who led the passing of record fiscal packages, an accommodative Bank of Japan that kept supportive monetary policies in place and the emergence of the omicron variant that threatens to derail global growth.

Looking ahead to 2022, investors monitor developments around the virus and the direction of inflation, seen as main catalysts for major central bank and market moves. 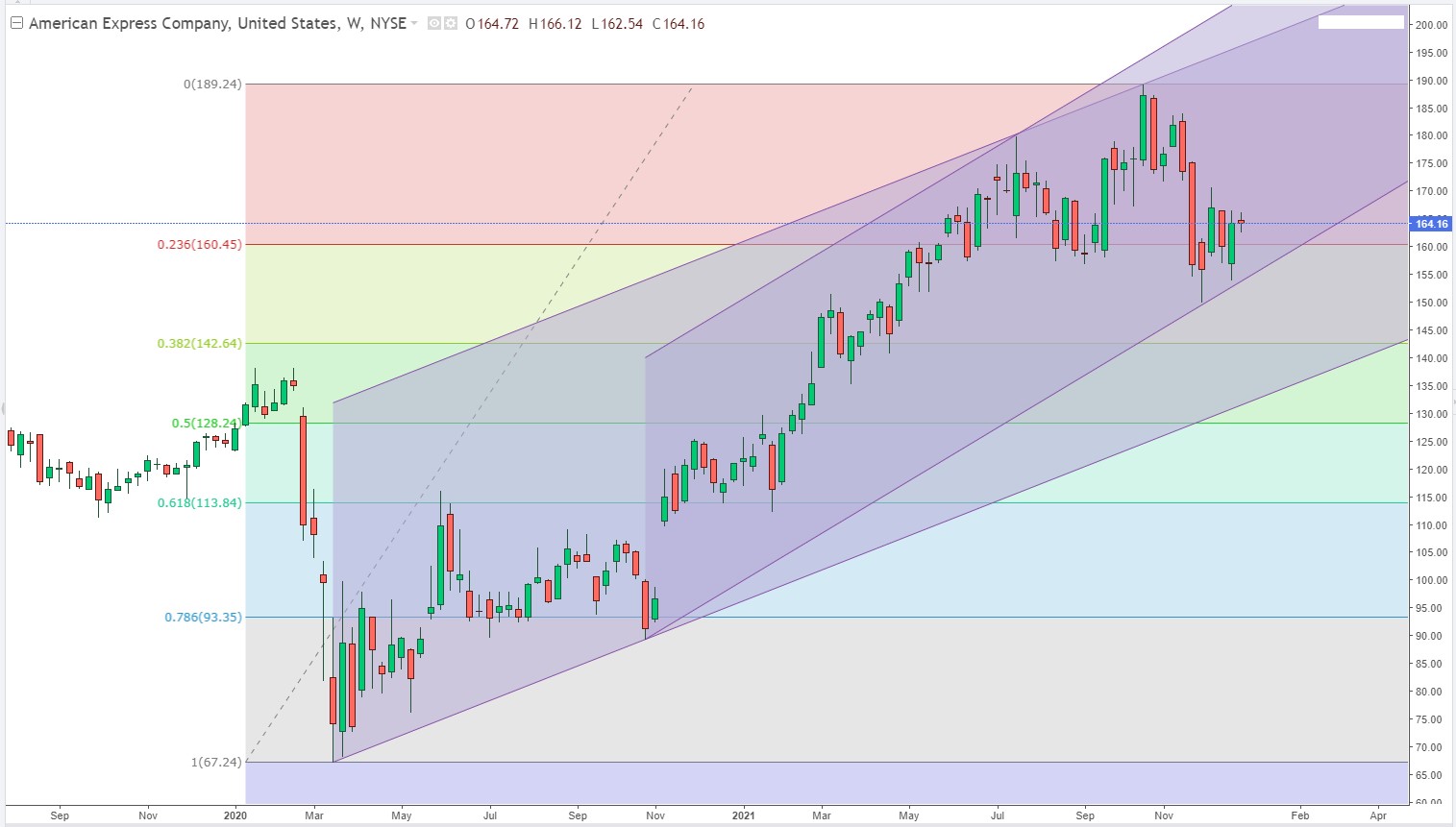 American Express closed at $164.16 in the latest trading session, marking a +0.2% move from the prior day. Heading into today, shares of the credit card issuer and global payments company had gained 9.18% over the past month, outpacing the Finance sector's gain of 2.2% and the S&P 500's gain of 3.11% in that time.

Investors will be hoping for strength from American Express as it approaches its next earnings release, which is expected to be January 25, 2022. On that day, American Express is projected to report earnings of $1.77 per share, which would represent year-over-year growth of 0.57%.

Meanwhile, our latest consensus estimate is calling for revenue of $11.42 billion, up 22.14% from the prior-year quarter. For the full year, our Zacks Consensus Estimates are projecting earnings of $9.55 per share and revenue of $41.67 billion, which would represent changes of +78.84% and +15.48%, respectively, from the prior year. 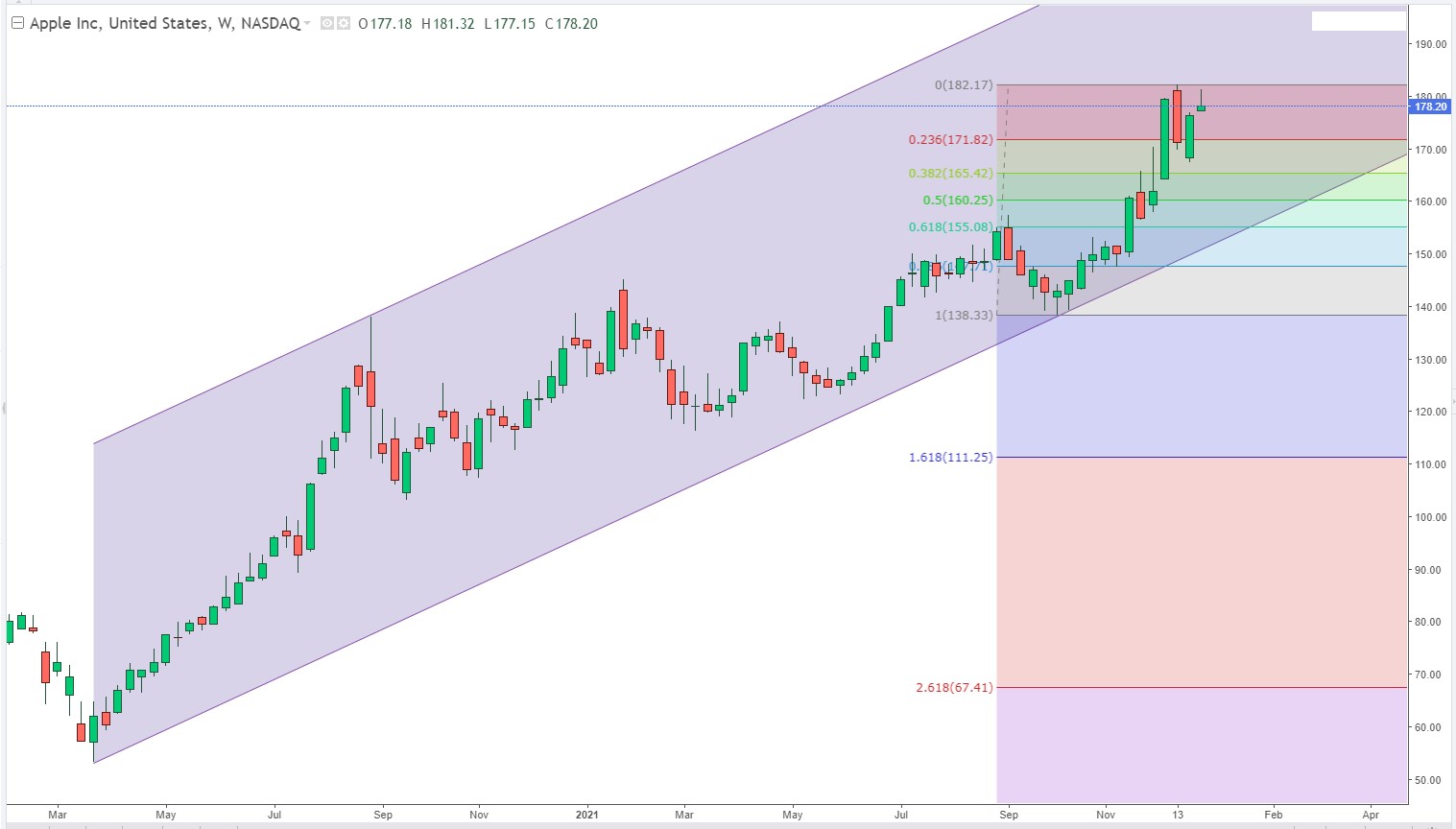 For the fiscal quarter ended Sept. 25, Apple reported 29% revenue growth year over year. The company generated 33% growth on the product side of the business driven by strong iPhone sales, and also reported 26% growth in services while wearables grew 13% year over year. What may be even more impressive than its revenue growth is the amount of cash that Apple generates; the company's trailing-12-month free cash flow is $93 billion. Investors will be hoping for strength from Boeing as it approaches its next earnings release. In that report, analysts expect Boeing to post earnings of $0.03 per share. This would mark year-over-year growth of 100.2%.

Meanwhile, our latest consensus estimate is calling for revenue of $17.82 billion, up 16.42% from the prior-year quarter. BA's full-year Zacks Consensus Estimates are calling for earnings of -$1.59 per share and revenue of $65.37 billion. These results would represent year-over-year changes of +93.16% and +12.4%, respectively.

Despite the customer losses, eBay's stock is up 29% year to date, but that does not ensure it will have similar success in 2022. In its second quarter of 2020, eBay had 161 million active buyers, which increased to 166 million by the first quarter of 2021. That's when economic reopening gained momentum, and eBay started losing buyers. As of its most recent quarter ended Sept. 30, eBay was down to 154 million active buyers, falling from $21.7 billion in the third quarter of 2020 to $19.4 billion in Q3 2021.

Still, eBay managed to increase revenue during that same time from $2.2 billion to $2.5 billion. eBay achieved this feat by increasing the percentage it takes from each sale. Overall, eBay's take rate increased from 9.7% in Q3 last year to 12.1% in Q3 this year. That can partly explain eBay's stock price rise in 2021 despite the lower buyer totals.

• German Manufacturing data for December is expected to increase to 57.9 compared to 57.4 the previous month.

• The US will release Dec Manufacturing PMI data, expected to decline to 57.8 compared to 58.3 the previous month

• China will release the Caixin Manufacturing PMI Dec, expected to increase to 50.1 from 49.9 the previous month.

• Germany's Dec Unemployment Rate data is forecast at 5.4% from 5.3% previously.

• US Dec Manufacturing PMI data forecast at 60.2 from 61.1 previously

• US Dec ADP Employment data forecast at 495K, down from 534K previously.

• The US Fed's FOMC minutes will be announced which is expected to give an idea of how quickly rates will be raised.

• Germany's Dec Inflation Rate data is estimated at 5.2 percent the same as the previous month.

• ISM Non-Manufacturing PMI Dec is expected to decline to 67.5 from 69.1 the previous month.

• Germany will publish data. Balance of Trade Nov is expected to increase to 14.2 billion euros from 12.8 billion euros.

• The European Union will issue an Inflation Rate Dec which is expected to increase by 5.1% compared to 4.9%.

• The market's most awaited data is the US Nonfarm Payroll Dec, expected to increase by 425K compared to November's 210K.