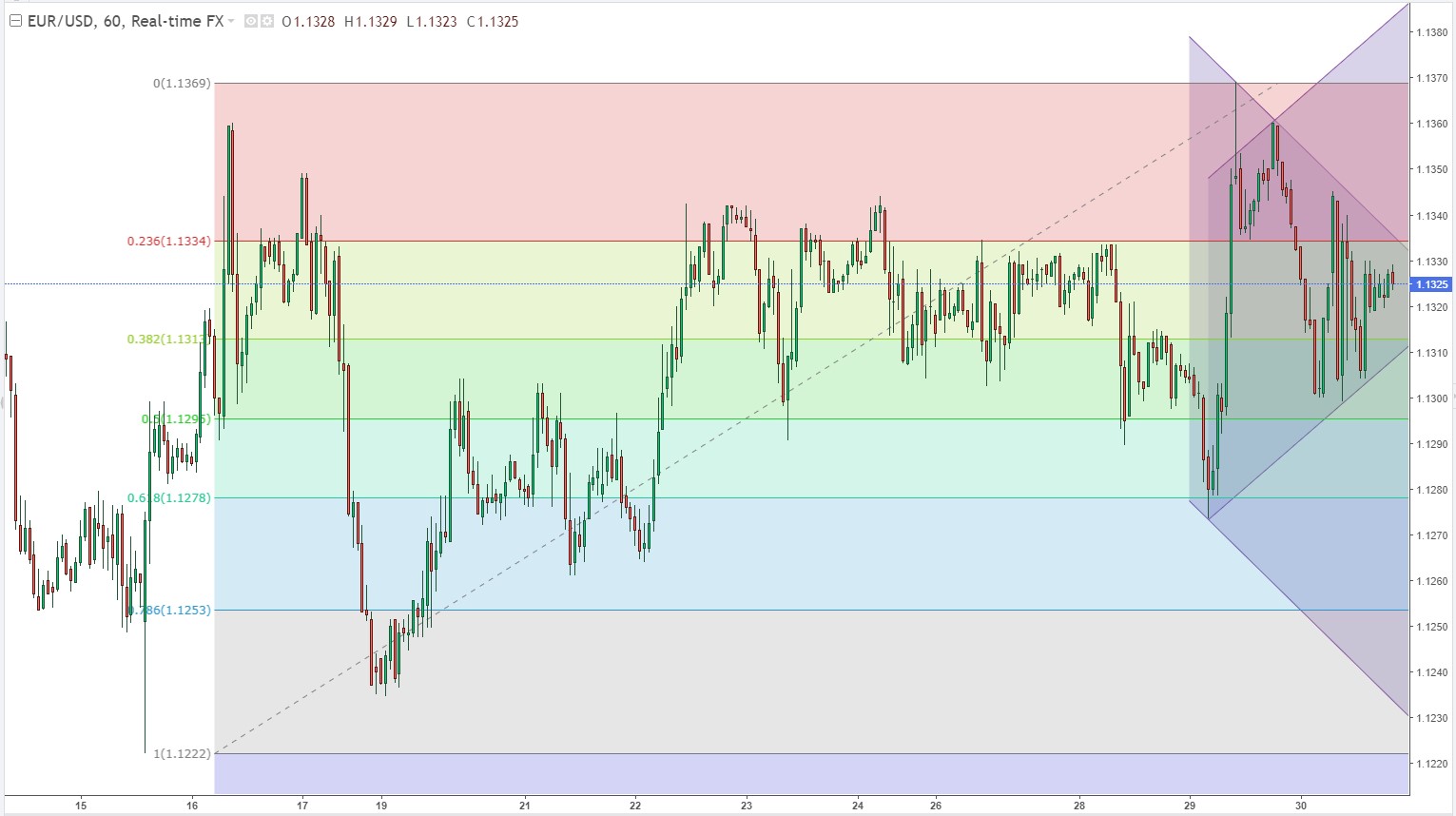 After hitting its highest levels of the month on Wednesday just under 1.1370 on Wednesday, EUR/USD has pulled back to within recent ranges. Earlier in the session, the pair tested its 21-day moving average at the 1.1300 level, but has since rebounded to around the 1.1330, where it trades lower by about 0.1% on the session. The pair’s failure to break above December’s 1.1240-1.1360.

The EUR/USD pair trades in the 1.1300 price zone, trimming its Wednesday’s gains. The pair has returned to its comfort zone just above the 1.1300 threshold, heading into the last trading day of the year, which will see most financial markets closed due to the New Year’s Eve holiday. Worth noting that Wall Street will work normally, although the bond market is due to an early close.

The USD/JPY pair has now rallied over 250 pips from the monthly swing low, around the 112.60 area touched on December 2, and seems poised to appreciate further. A sustained strength above the key 115.00 psychological mark, which coincided with an ascending channel resistance, adds credence to the constructive outlook. The USD/JPY pair maintained its bid tone through the early North American session and was last seen hovering near the monthly top, around the 115.15-20 region.

The optimism over signs that the Omicron variant might be less severe than feared and is unlikely to derail the economic recovery remained supportive of the underlying bullish sentiment. This was evident from an extension of the recent runup in the global equity markets, which undermined the safe-haven Japanese yen and pushed the USD/JPY pair higher. GBP/USD dropped toward 1.3450 in the early European session on Thursday but made a sharp U-turn ahead of the American session. With the greenback facing renewed selling pressure amid falling yields, the pair is trading in the positive territory above 1.3500. GBP/USD has reversed its direction after rising to its highest level in more than a month at 1.3505 during the Asian trading hours.

The technical outlook suggests that the British pound could have a tough time regathering its strength but buyers could look to reclaim control as long as key support levels remain intact. During the American trading hours on Wednesday, the greenback faced strong bearish pressure. The AUD/USD pair met sellers around a Fibonacci resistance level, but holds nearby, poised to end the year with a strong note. AUD/USD is currently probing monthly highs in the 0.7260 area and set for a second consecutive day of gains as the pair continues to derive support from buoyant risk appetite in global equity and commodity markets. For now, the pair seems to be finding resistance in the form of its 50-day moving average at 0.7265 and has been unable to break above an uptrend that has been capping the price action going back to the end of November.

On the eve of New Year’s Eve, the Aussie looks on course to close out what has been a fairly rough year on a positive note. The Australian dollar has shed roughly 5.6% of its value versus the US dollar this year but is up roughly 2.0% this month. 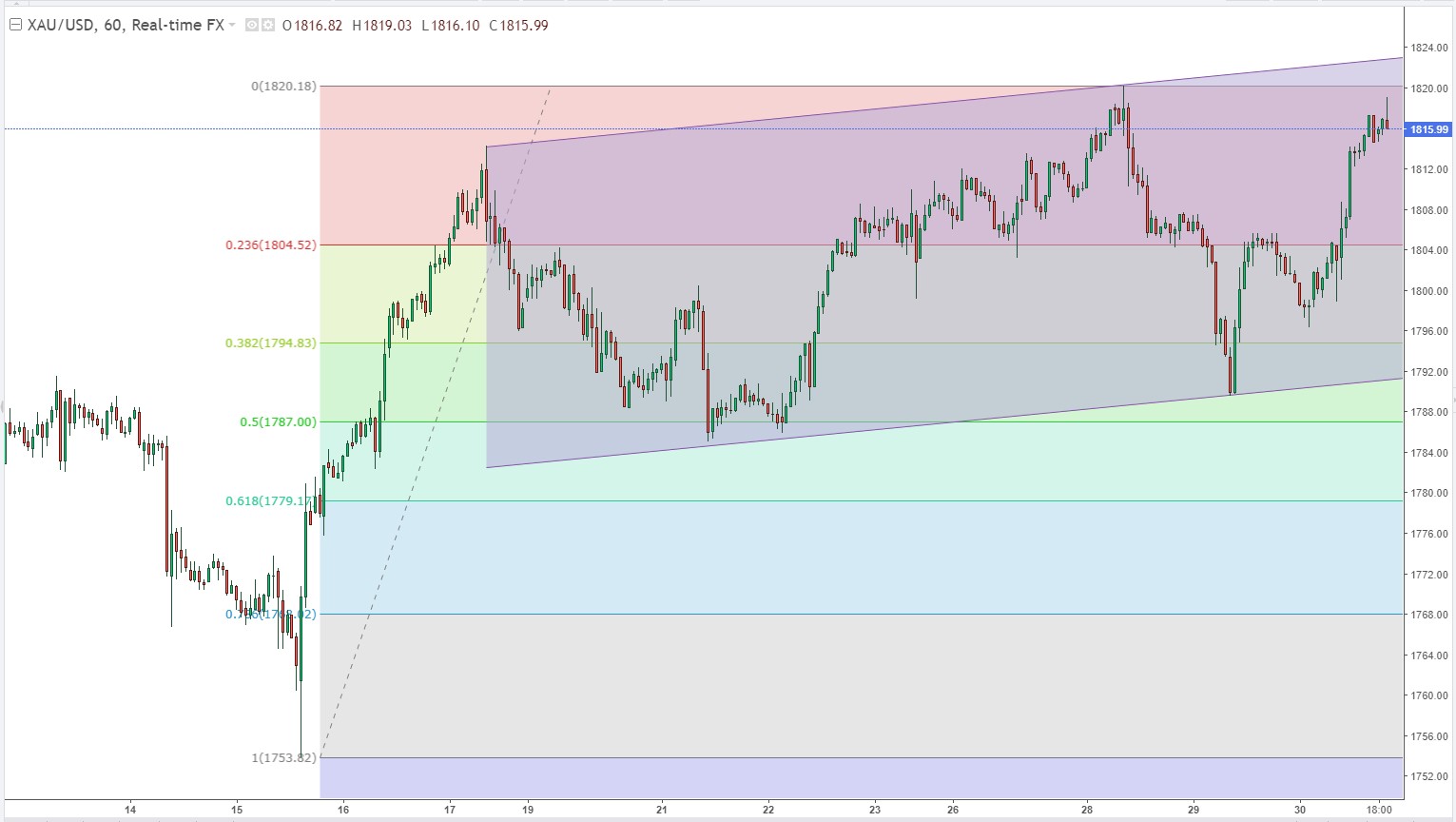 XAU/USD gains bullish traction has an immediate resistance at 1.820.25. Spot gold is little changed on a daily basis, marginally higher around the 1.813 level. The dollar keeps seesawing between gains and losses without a certain catalyst as investors close their books for 2021. XAU/USD trimmed the past two-day losses, holding near its recent monthly high of 1.820.25.

The daily chart hints at a bullish continuation, as buyers defended the downside around a mildly bullish 200 SMA. The 20 and 100 SMA converge below the longer one, also heading modestly higher. Technical indicators, in the meantime, picked up within positive levels, reflecting an increasing buying interest. Oil prices have spent Thursday trading within recent ranges, with front-month WTI futures in recent trade rebounding from a brief dip back under the $76.00 level to back above the $77.00 mark and eyeing a test of Wednesday’s post-bullish inventory monthly highs at $77.30.

At present, WTI is trading just over 50 cents highs on the session, a continuation of the positive bias that has lifted the American crude oil benchmark from as low as $72.50 at the start of the week to current levels over $4.50 higher. 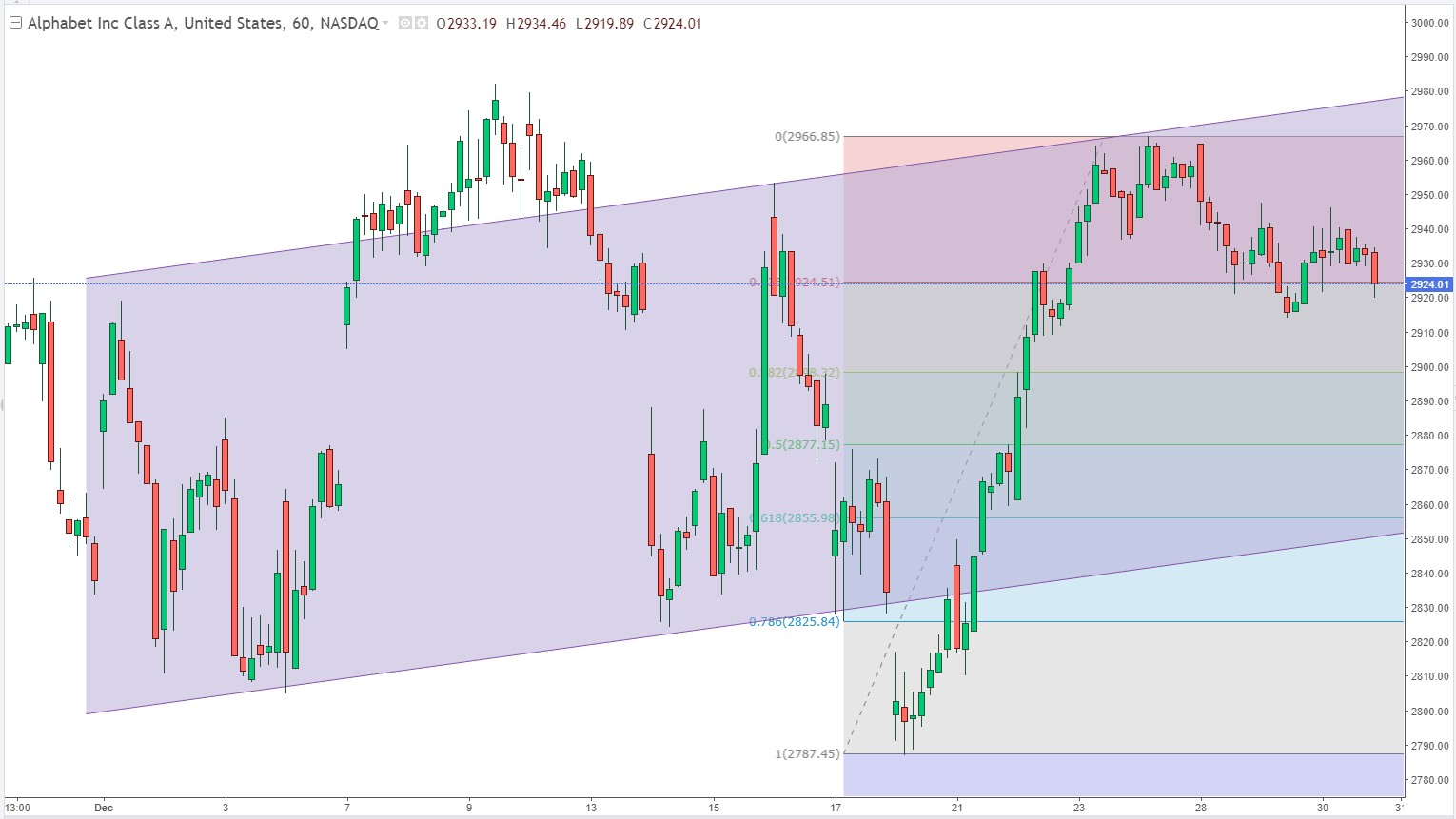 Alphabet stock has created a new buying opportunity for investors, which is why it's yesterday's pick for the IBD 50 Stocks To Watch. Now Aplhabet stock have formed a new flat base with a 3.019.43 entry. The potential buy area tops out at 3.170.40.

Last week, the stock rallied to regain support at its conjoined 21-day and 50-day lines. It remains roughly 3% away from the proper entry. Alphabet currently holds strong IBD Ratings. Both the Composite Rating of 95 and Relative Strength Rating of 92 exceed the minimum 90 Composite and 80 RS ratings we look for in top growth stocks. Verizon Communications closed at $52.36 in the latest trading session, marking a -0.68% move from the prior day. Meanwhile, the Dow gained 0.25%, and the Nasdaq, a tech-heavy index, lost 0.33%. Prior to yesterday's trading, shares of the largest U.S. cellphone carrier had gained 4.87% over the past month.

Investors will be hoping for strength from Verizon Communications as it approaches its next earnings release, which is expected to be January 25, 2022. In that report, analysts expect Verizon Communications to post earnings of $1.28 per share. This would mark year-over-year growth of 5.79%. VZ's full-year Zacks Consensus Estimates are calling for earnings of $5.38 per share and revenue of $133.31 billion. These results would represent year-over-year changes of +9.8% and +3.91%, respectively.