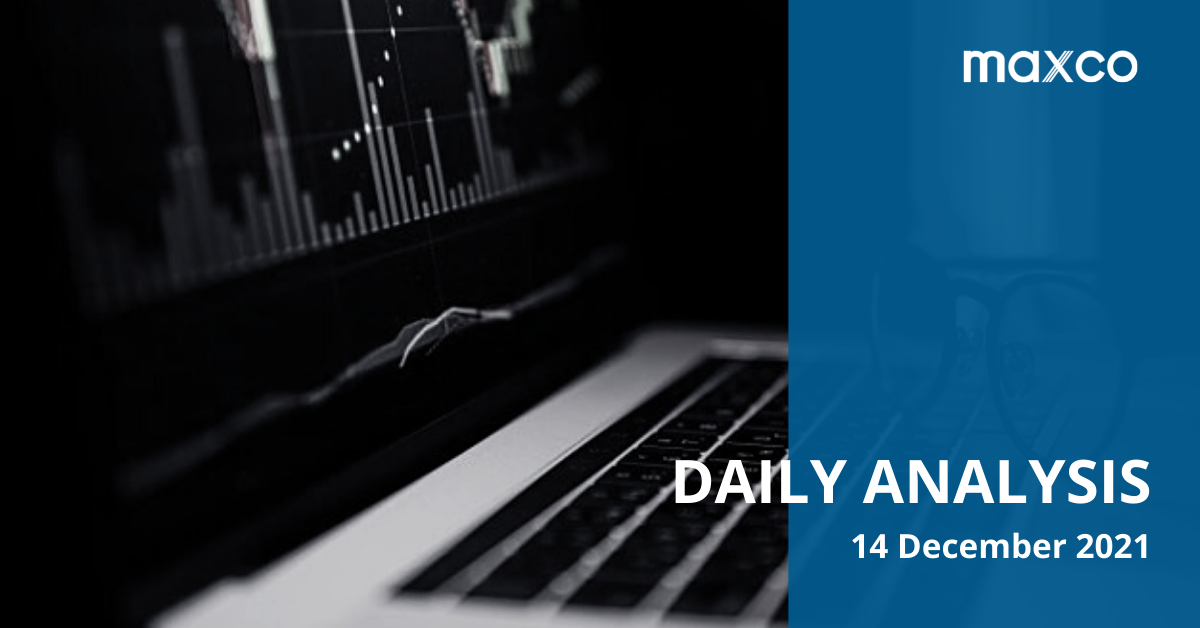 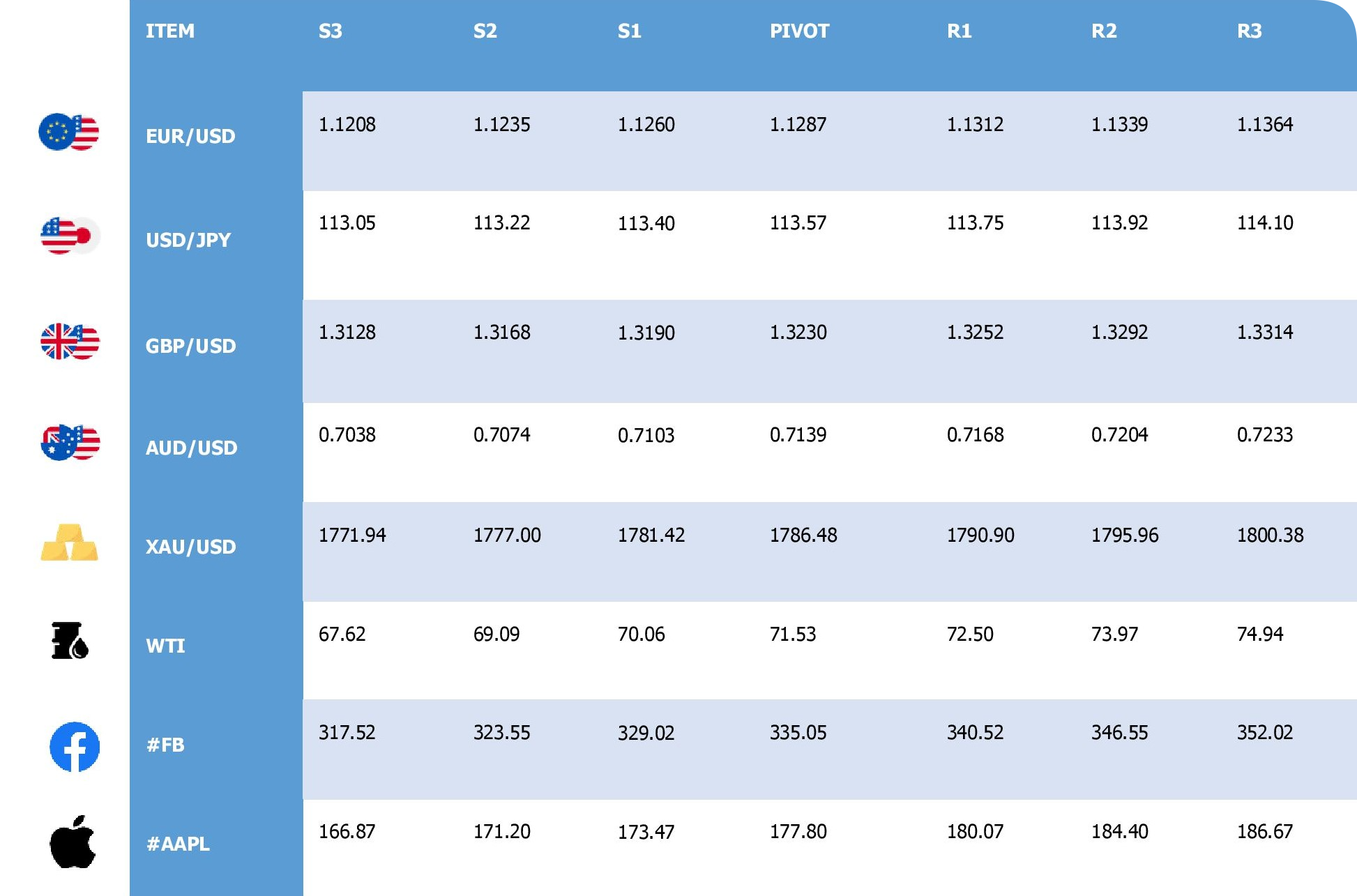 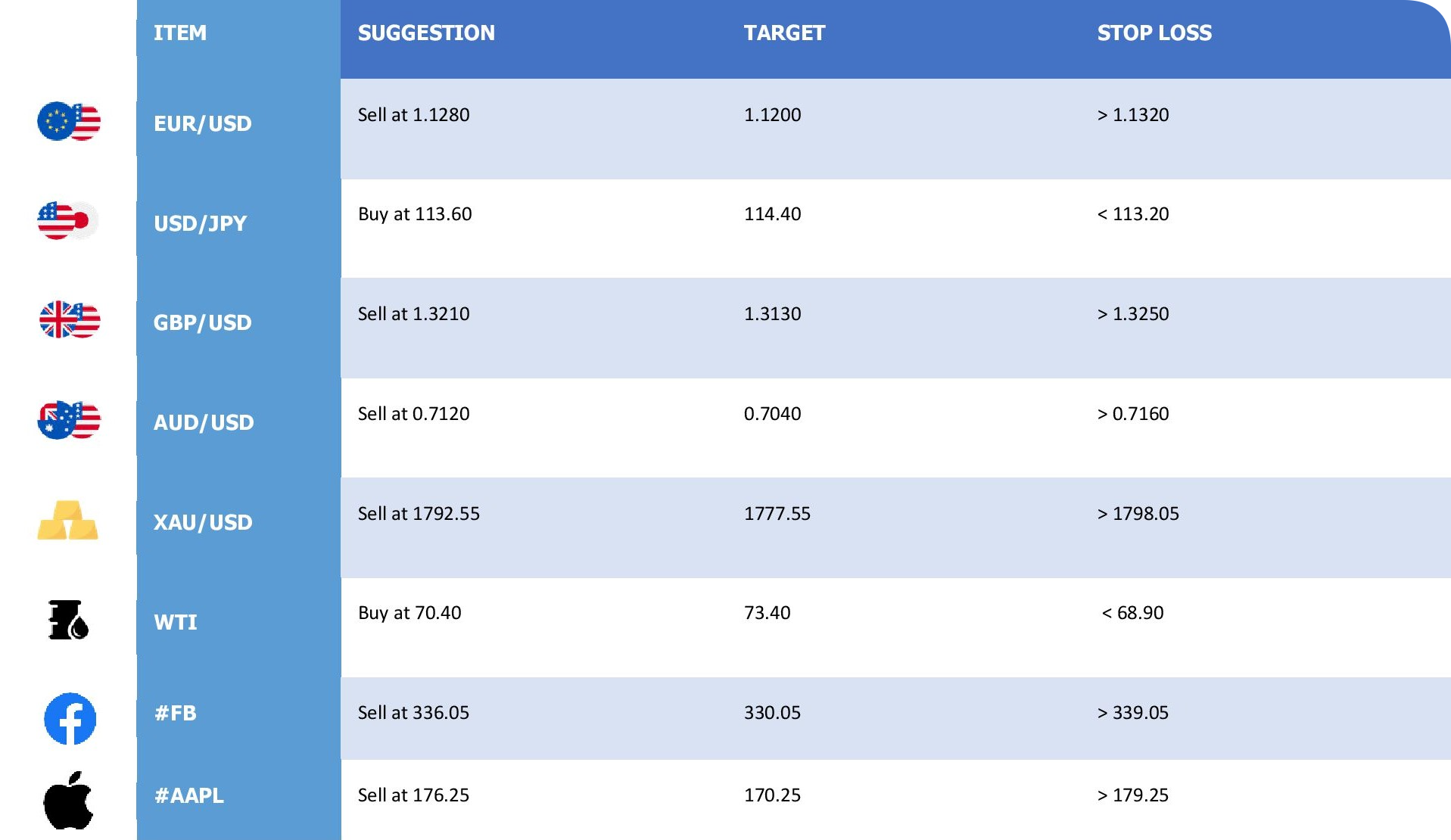 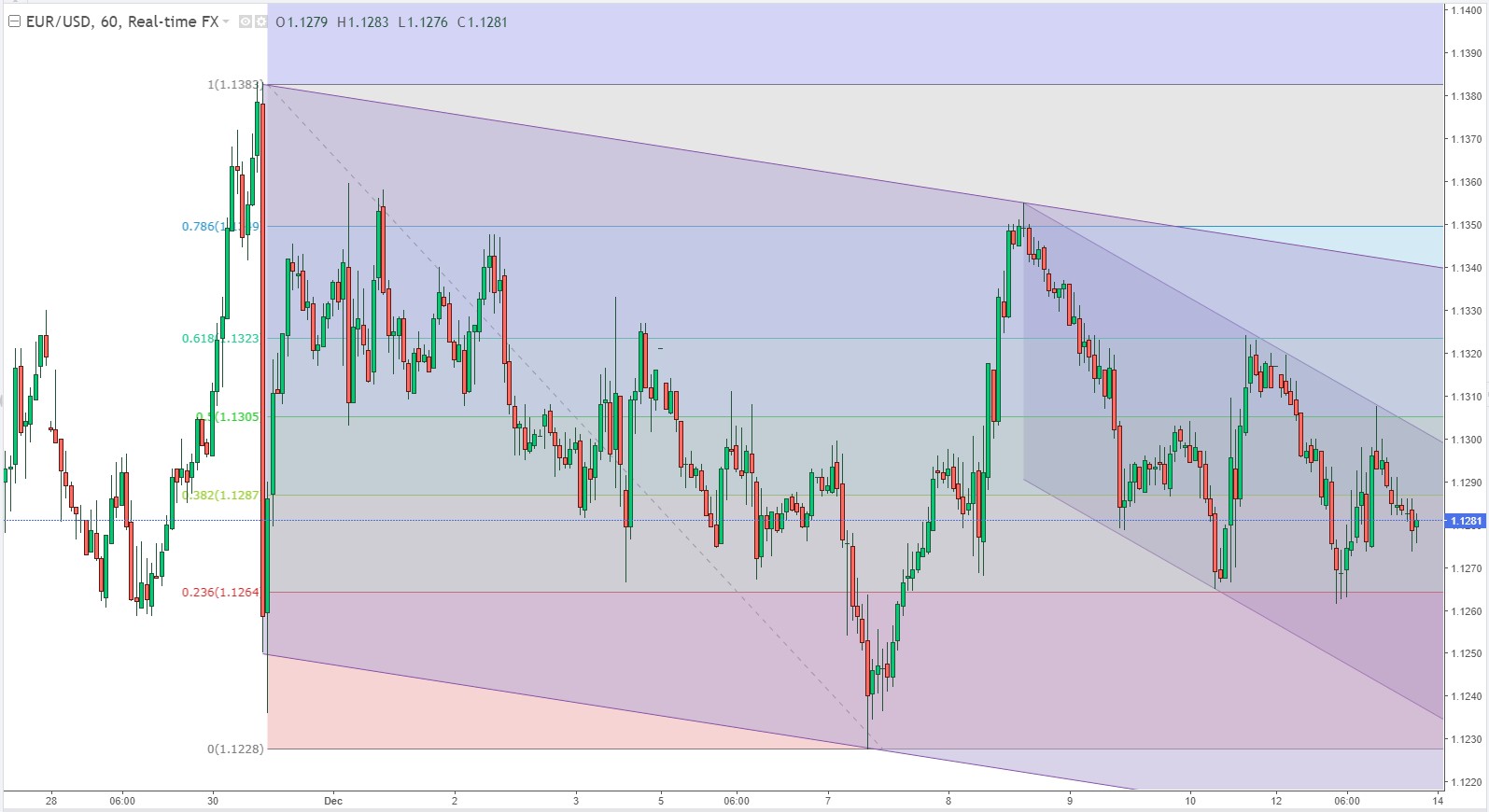 On Tuesday, the Federal Reserve will start its two-day meeting. Fed officials are likely to strike a much more hawkish tone at this week's FOMC meeting than they did in November, although a major shift is now widely anticipated by markets participants. 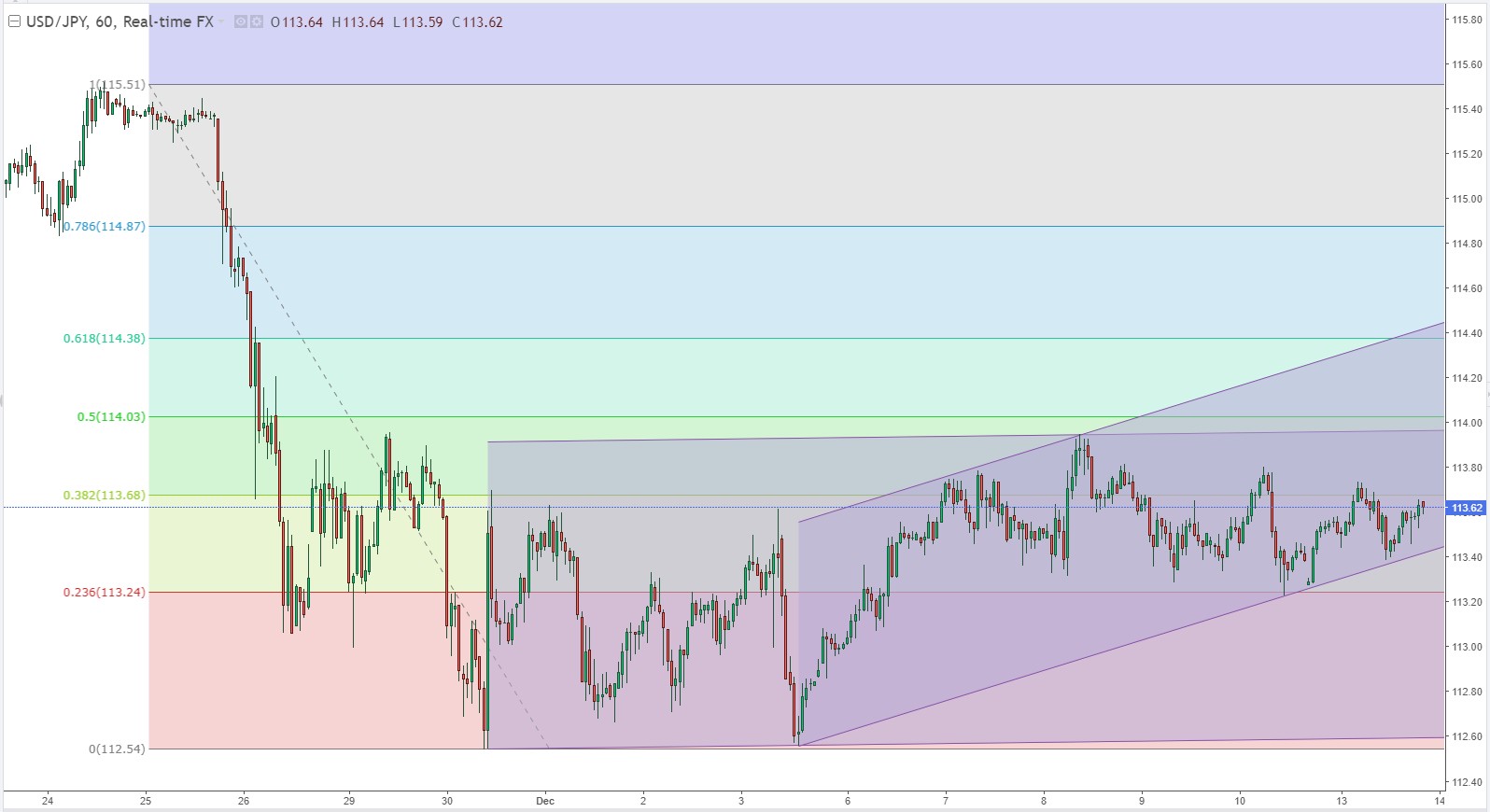 USD/JPY continues to trade close to its 50DMA and the 113.50 level as key market events are awaited. The most important event this week will be the Fed meeting, which should see the bank pivot hawkishly.

If long-term US yields continue to push lower (the 10 year is down about 5bps on the day and back below 1.45%, USD/JPY may well test the bottom of this range in the near future. Beyond these nearest levels of support and resistance, there is the 112.50 area to the downside, which is a double bottom from late November or early December, and there is the November (annual) high at 115.50.

In terms of the major events in store this week, the highlights will be the Fed’s monetary policy decision on Wednesday, followed by the BoJ’s decision on Friday. 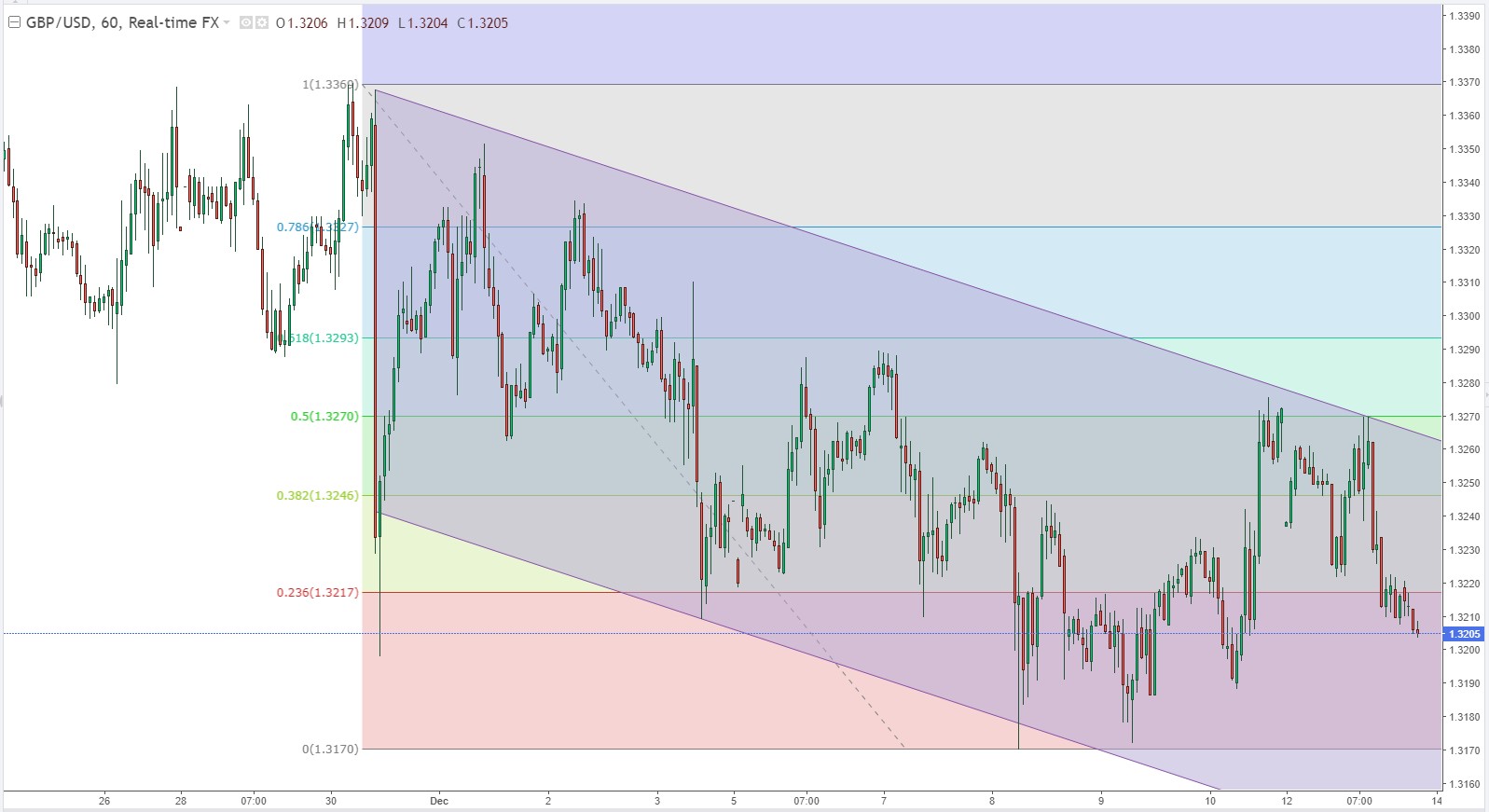 GBP/USD fell toward 1.3200 during the European trading hours but staged a rebound. With the dollar struggling to preserve its strength amid falling US T-bond yields, the pair is trading above 1.3250.

After rising toward 1.3300 ahead of the weekend, GBP/USD has failed to preserve its bullish momentum on Monday with the latest coronavirus headlines from the UK weighing on the British pound. In case buyers fail to defend the support area that seems to have formed around 1.3200.

The AUD/USD pair made quite a nice comeback this week, ending at around 0.7170. The pair recovered from a fresh 2021 low of 0.6992, achieved after the release of a tepid US Nonfarm Payroll report last Friday. The pair rallied alongside Wall Street, which managed to post substantial gains throughout the first half of the week.

Demand for the American currency remained subdued despite the market’s mood being tepid, as market participants struggled to digest the possible effects of the new Omicron variant on economic progress. Furthermore, investors were cautious amid the looming US Federal Reserve monetary policy decision. 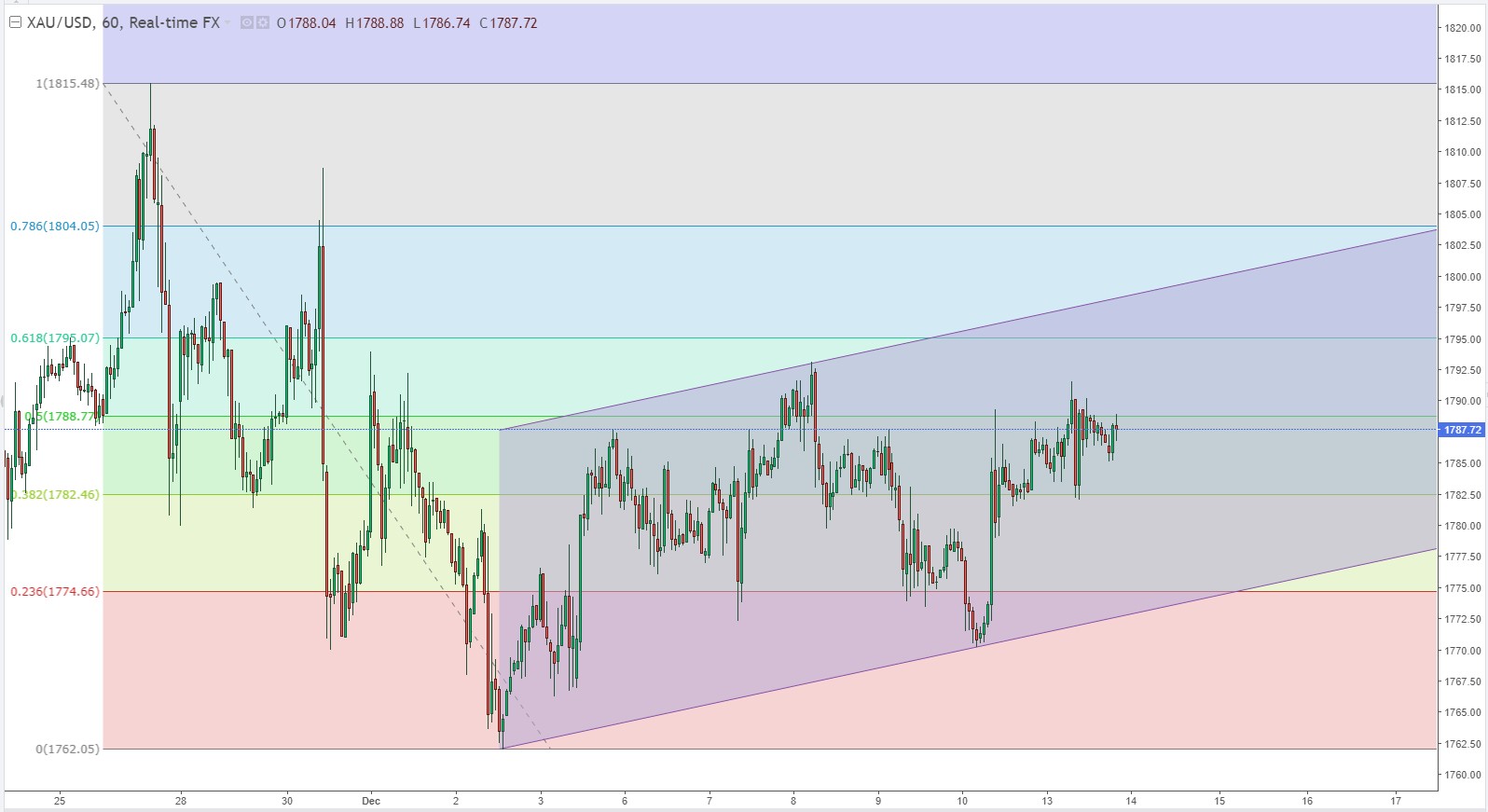 Spot gold is up within range on Monday, trading around $1.790 a troy ounce after peaking at 1,791.58. The Fed, the BoE and the ECB are meant to announce their latest decisions on monetary policy this week.

Even from a technical perspective, bulls are likely to wait for a sustained move beyond a technically significant 200-day SMA before placing fresh bets. The mentioned barrier, around the $1,793-95 region, coincides with 100-day SMA and should act as a pivotal point for traders. A convincing breakthrough has the potential to push spot prices beyond the $1,800 mark, towards testing the next relevant resistance near the $1,810-15 supply zone. The momentum could further get extended towards the $1,832-34 strong horizontal barrier. 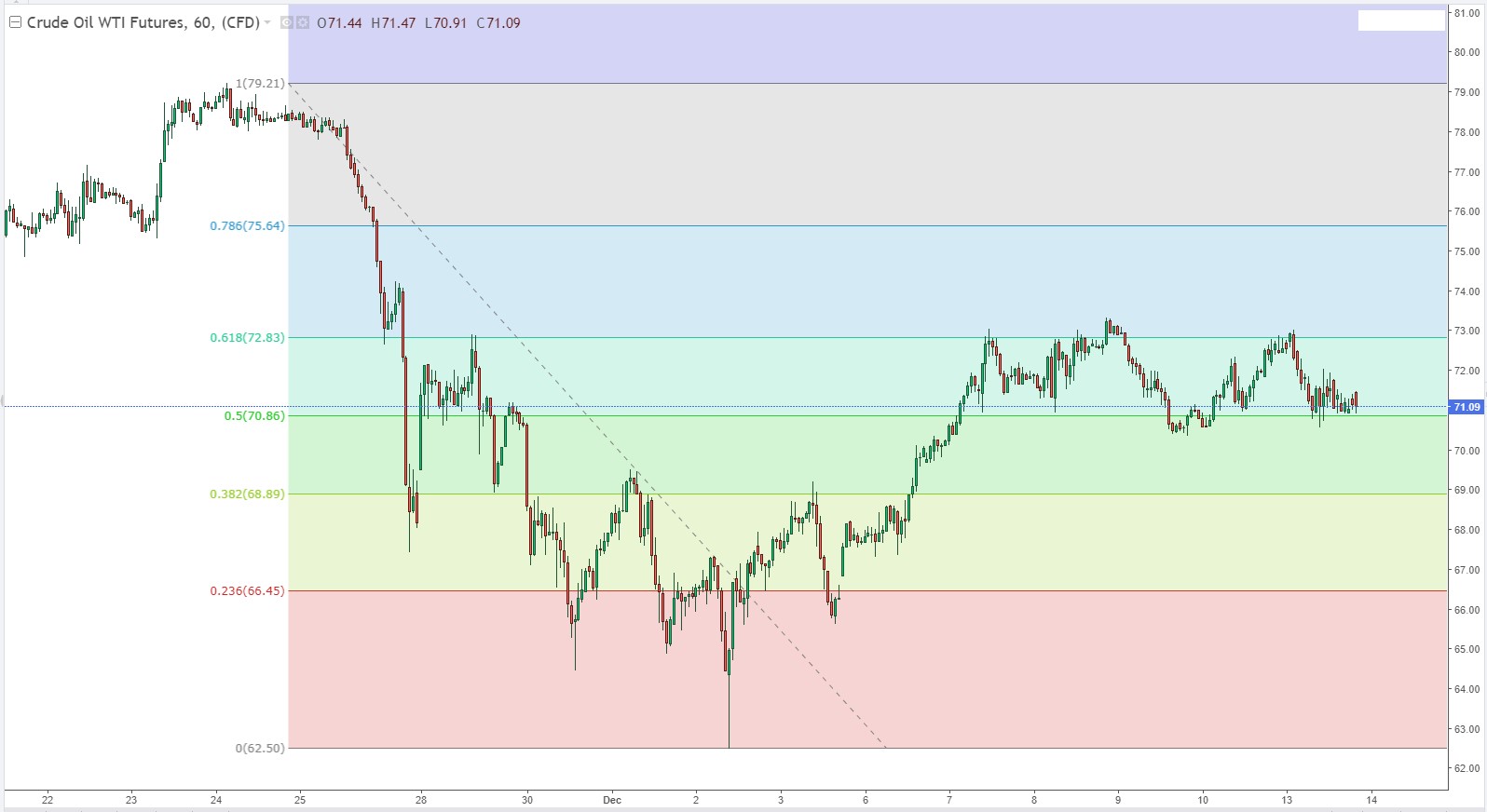 The US crude oil benchmark, Western Texas Intermediate (WTI), edges lower during the New York session, trading at $70.96 at the time of writing. Since the mid-European session, the market mood has been in risk-off mode. Alongside that, the impact on people’s mobility and the UK’s weighing on imposing stricter restrictions pushed crude oil prices down.

In the overnight session, WTI’s peaked at around $72.75, then tumbled towards $70.50 amid the impact of the omicron variant and mobility restrictions that could decrease oil demand. That, alongside technical resistance levels with the 100-hour simple moving average (SMA) at $71.70 and the 50-hour SMA at $71.36, put a lid on WTI’s prices. 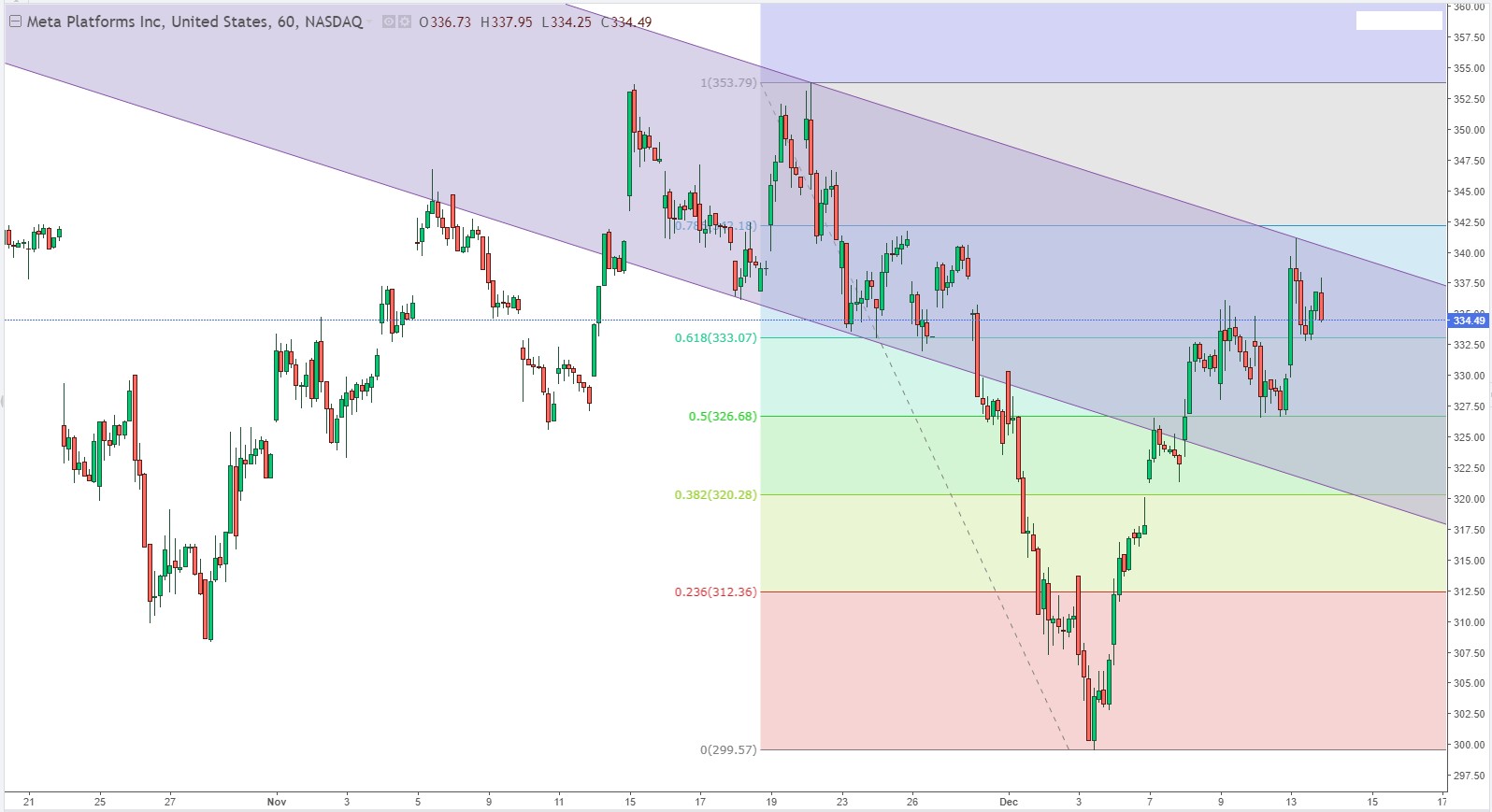 Meta Platforms reported revenue of $29 billion in the third quarter 2021, with a large part of this coming from advertising. This showed an increase of about 35.5% compared to the same quarter last year. 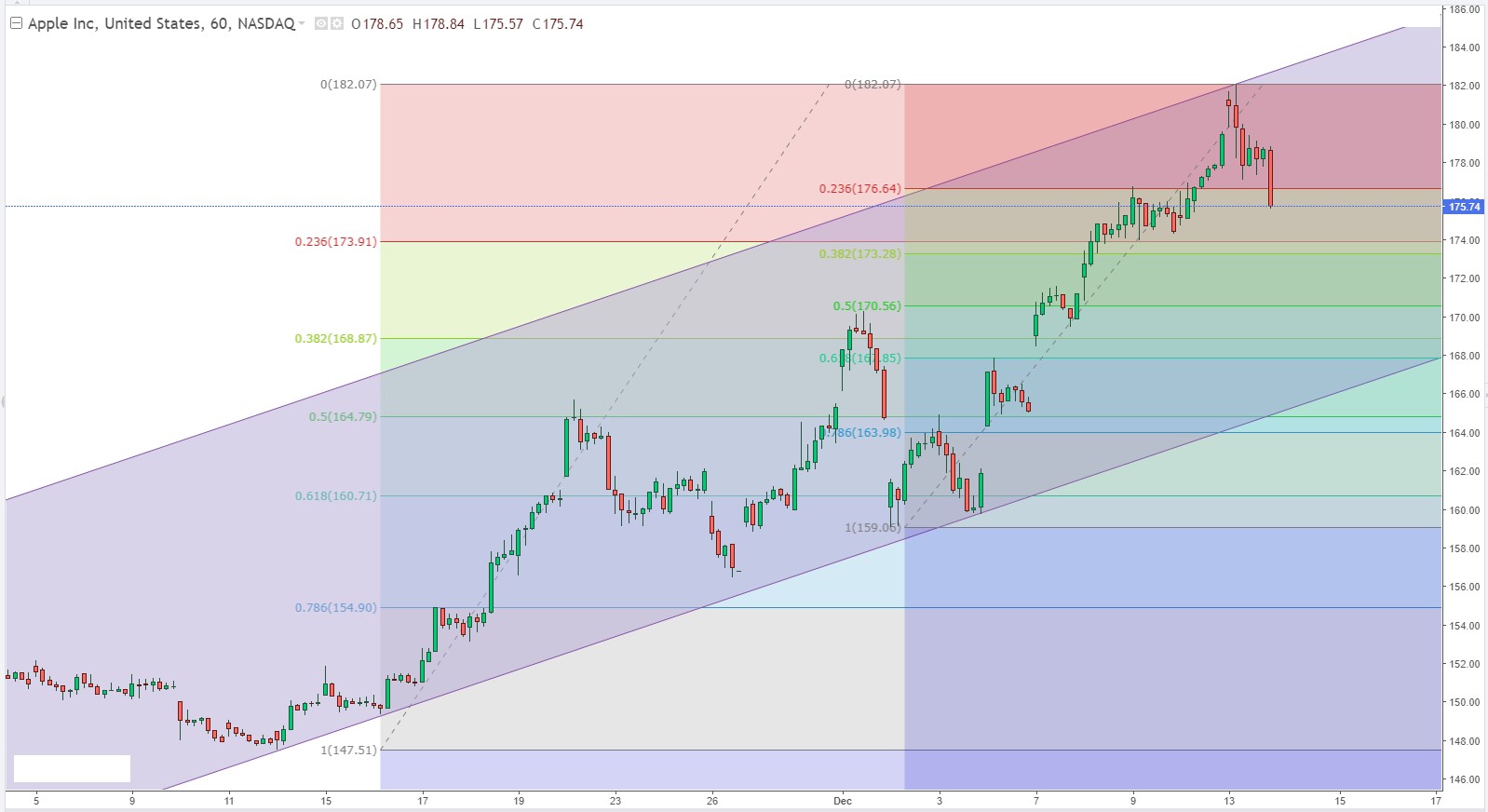 Apple Inc. shares fell on Monday, with the iPhone maker retreating in the wake of a recent advance that brought it within striking distance of what would be a historic $3 trillion market valuation.

The stock closed down 2.1% at $175.74. This was Apple’s biggest one-day percentage loss since the broad market selloff on Nov. 26, and it resulted in a market capitalization of $2.88 trillion. The drop came during a broadly negative session for U.S. equities, with large-cap technology and internet stocks among the day’s notable decliners. The weakness came as investors looked ahead to a number of key central bank decisions, notably the U.S. Federal Reserve, which is expected to pivot toward a more hawkish stance on Wednesday.