EUR/USD was boosted primarily by technical buying on Wednesday, as the pair broke above a week-long downtrend to pop above the 1.1300 level again and surpassed its 21-day moving average at 1.1327 before stabilising around 1.1350. At current levels, the pair is up an impressive 0.75%.

Risk appetite was a little weaker on the session, with US and European equities slipping amid mixed headlines about the efficacy of existing vaccines versus the new, fast spreading Omicron variant of Covid-19. This weighed ever so slightly on USD Short-Term Interest Rate market pricing of Fed rate hikes in 2022 (the implied yield on the December 2022 three-month eurodollar future fell about 2bps). The British pound recovers from year-to-date lows around 1.3160, trading at 1.3233 during the New York session at the time of writing. At press time, the market sentiment is upbeat, as positive news from the overnight session concerning the vaccine effectiveness against the newly discovered omicron strain shows that a third shot neutralizes the omicron variant.

In the overnight session, the GBP/USD dipped as low as 1.3160, as reports about the imposition of fresh COVID-19 measures in the UK could be effective as soon as tomorrow. That, alongside no advancement in Brexit negotiations, has put a lid on the pair amid a scale back by money market futures, which now expect that the Bank of England (BoE) would maintain rates unchanged, amid dovish expressions by “hawkish” BoE Saunders, on December 3. Saunders said there “could be particular advantages in waiting and seeing more evidence” of the COVID-19 omicron impact. 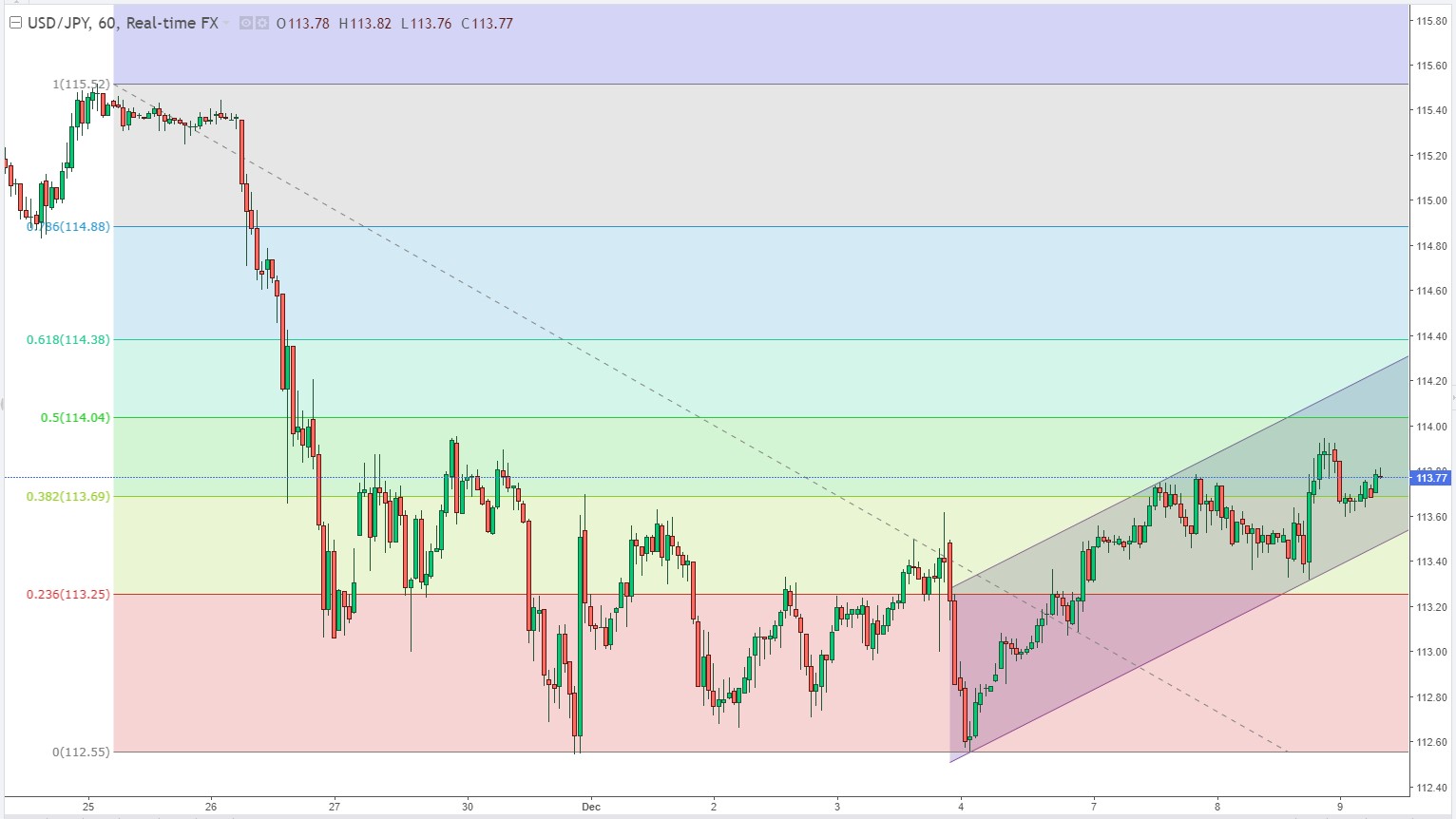 Easing concerns about the economic fallout from the new Omicron variant remained supportive of the prevalent risk-on environment. This, in turn, undermined the safe-haven Japanese yen and acted as a tailwind for the major.

On the other hand, the US dollar drew some support from rising bets for a faster The Fed liftoff and a further recovery in the US Treasury bond yields. In fact, the markets have been pricing in the possibility for an eventual The Fed rate hike move in May 2022 amid worries about stubbornly high inflation. This provided an additional lift to the USD/JPY pair, though the uptick lacked strong bullish conviction. AUD/USD has extended on its recent run of gains in recent trade, with the rally accelerating as the pair breached a key level of resistance around 0.7170. AUD/USD now trades close to the 0.7180 mark, up about 0.8% on the day, and extending its gains on the week to now more than 2.5%.

Commodity prices remain buoyant, with oil and copper prices up more than 1.0% on the spot market, boosted following this week’s strong China import figures and amid efforts by the PBoC to further ease financial conditions. This has continued to provide tailwinds for the Aussie, while Tuesday’s RBA meeting is likely adding to the bullish. Gold prices have slowed the decline over the past few days after sinking below the bottom of a bear flag formation in late-November. Gold pushed down for a fresh low at 1761 last week but, since then, prices have started to push back into a prior level of resistance, taken from around the 1792 level on the chart.

This keeps gold prices in a bearish position, but with CPI set to be released on Friday, there remains potential for counter-trend breakout beyond the 1792 and perhaps even 1800 levels. Last month something similar happened, just after gold had started to test the lower trendline in the channel. When CPI printed at a whopping 6.2%, prices jumped up to the 1815 level before a slow burn developed until prices had bottomed out last week at 1761. Boeing extended its bounce Tuesday after private-equity firm 777 Partners announced it would nearly double its 737 MAX order to 68 jets. Boeing rose 1.5% to $208.83, Tuesday after the companies said 777 Partners would add 30 more jets to its commercial aircraft portfolio.

It’s the Miami-based investment firm’s fourth order this year for the fuel-efficient, single-aisle jets, a press release noted. The order is worth $3.7 billion at list prices, the companies said, and will allow 777 Partners to “expand 737 MAX operations across the fleet of its affiliated global low-cost carriers.” The increase of U.S. fuel stockpiles for a second week in a row didn't dissuade energy bulls from taking their legs off the gas pedal in the oil rally. The so-called WTI benchmark has rebounded since, to above $70 this week after global medical experts, including top US virologist Anthony Fauci, said at the weekend that early studies on Omicron showed its effects might not be as severe as initially feared. Pfizer and its partner BioNTech also said that three doses of their vaccine could neutralize the variant.